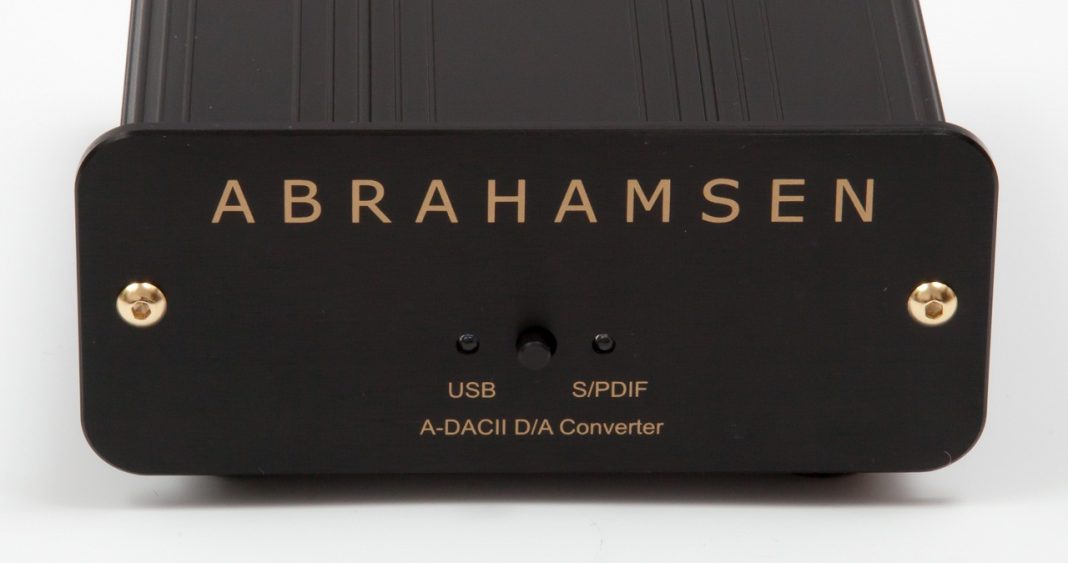 Abrahamsen Audio is a Norwegian company founded in 2004 by Per Abrahamsen and his 3 sons. The name Per Abrahamsen is also representative for the Electrocompaniet company which was founded by him in 1972.

Under the name of this company the first audio product was created: the legendary 25 watt amplifier.

The  amplifier was a great success and was soon recognized  to be more musical than other transistor amplifiers of the time.

Per was the engineer of all Electrocompaniet products until 2003, when the company was sold.

With the establishment of Abrahamsen Audio, Per and his sons had as a primary goal creating better products and at the same time having more affordable prices.

Abrahamsen company motto is: uncompromising quality is not an option – it’s an obligation.
Products launched under the new name were: 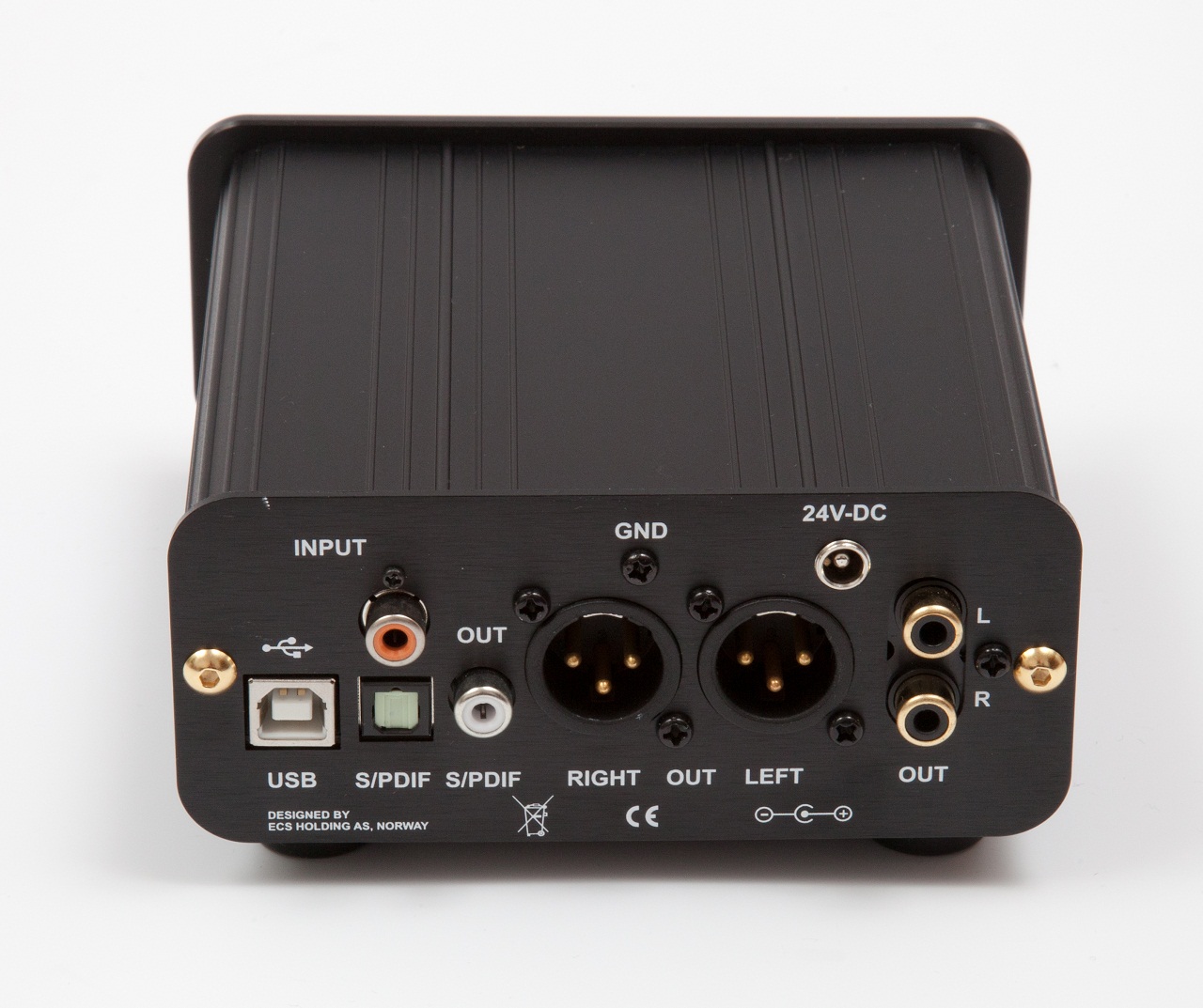 In this review I will talk about the A-DACII audio convertor, newest product of this company.

A-DAC was launched in late 2010, having an absolutely phenomenal price for what it offers: single ended and balanced DAC with one USB input at a price of around 140 Euro.

Last year they released the upgraded version of the small A-DAC, now the device having  three digital inputs (USB, optical and coaxial), two analog outputs RCA and XLR and another interesting feature: it can be used as a USB digital interface  (in M2Tech HiFace and AD Labs Mars manner), as a transport to a better performance DAC.

The device has a simple design, it is entirely made of black anodized aluminum with four rubber feet mounted on the bottom for vibration absorbing.

On the front panel there is a single button, from which is selected the digital input: USB or S/PDIF, the device is not powered by USB (a big plus), but from an external power supply.

Manufacturer’s specifications are as follows:

Since the DAC is 100% balanced, it is based on two AKM DAC chips.

Its construction is quite interesting by the fact that it receives 16 bit signal DAC and converts it to 24 bit signal and the frequency response is increased from 44.1 kHz to  192 kHz by upsampling.

By this technique the noise is reduced by about 10 dB, drastically reducing distortion and allowing the music to be untouched by external interference.

The first impression was the lack of background noise and of a relatively detailed and airy sound, obvious shortcomings were not observed.

The device has been tested on several musical genres, mainly on:

The Cranberries – No need to Argue 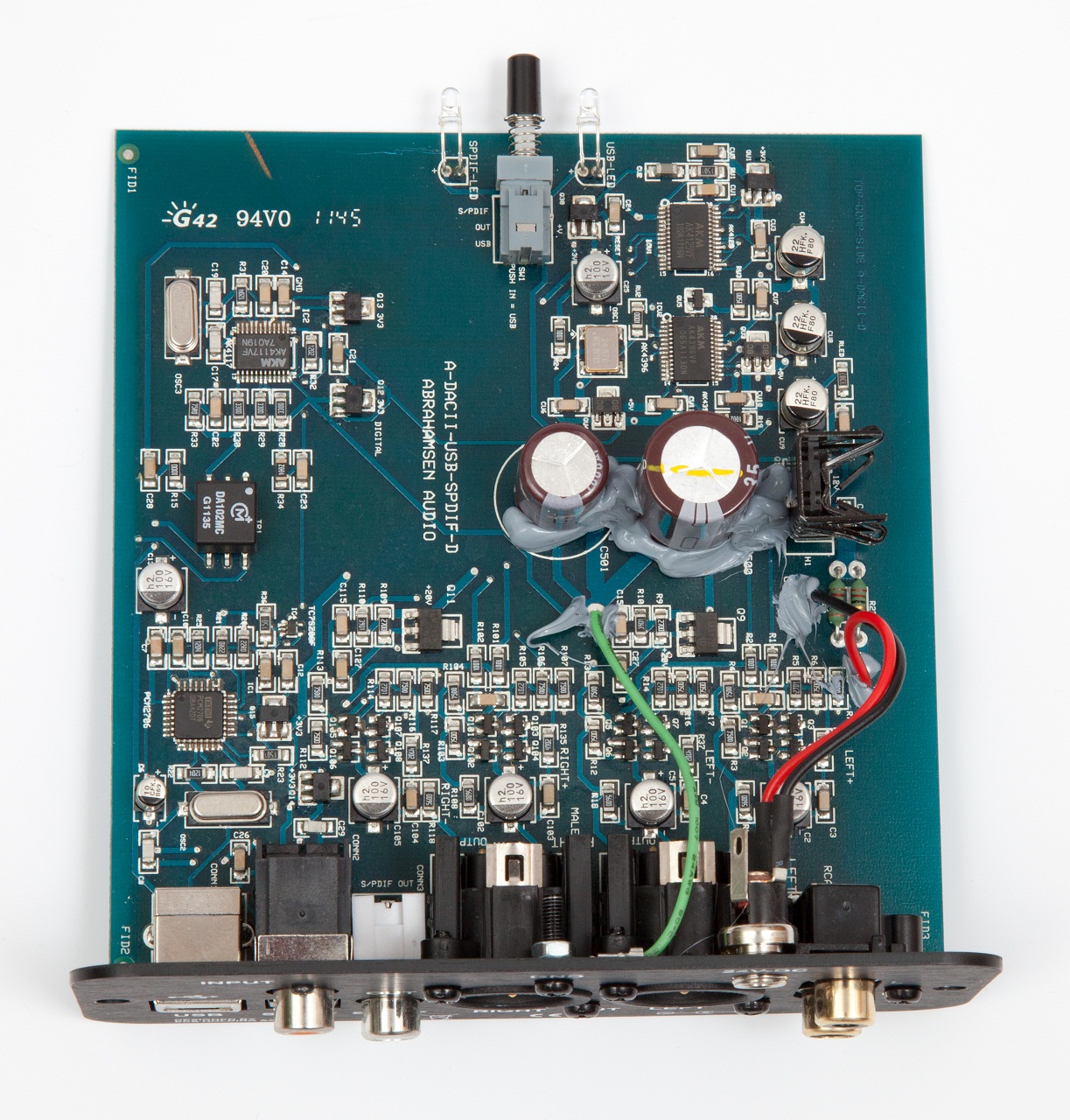 On the superb jazz called Gentle Ben the sound is played calm and peaceful, as if music is flowing like a slowly river.

It is noteworthy how the subtle instruments come from behind the listener, making the sound more intimate, inviting you to enjoy it even more.

Contrabass and saxophone sounds full, melodious and sweet, the  piano is caressing your ear. The song is well played and any subtlety is heard, sound being relaxing.

The DAC does not have problems with slow music. Compared to other DACs, I feel that Norwegian has a more syrupy soundm more focused on mid and low frequencies.

An excellent bass test are tracks from Infected Mushroom. On agglomerated and dynamic moments, DAC’s keep up the pace and is not losing tact, having a well-tuned timing. Bass goes low and hits hard.

The fact that the DAC does not drown and doesn’t loose its breath is to be noted.

Due to how good bass is played, it has no problems with electronic and rock music. Even if the DAC is small, the bass is precise and deep.

The Irish song „No Need to Argue” is a good test for the presence and detail retrieval.

A very good example for presence and mids reproduction is the album „The Wall” of Pink Floyd.

The songs were played warmer and rounder. Music has become as a whole, rendered as a sphere of energy, relatively big soundstage, but not as extended as are tracks on this album.

Soundstage dimensions were pretty big, but sound didn’t fill completely the listening room. Meanwhile, sound like was more focused on the left and on the right, losing a bit of depth, making it sound a little more 2D than what I was used to. But if I am not considering how stage is rendered, the sound was pleasant on the ear, natural and real, very analog in some way.

An excellent test of the stereo image, delimitation in space, soundstage and dynamics is Schostakovich’s Symphony No.9. 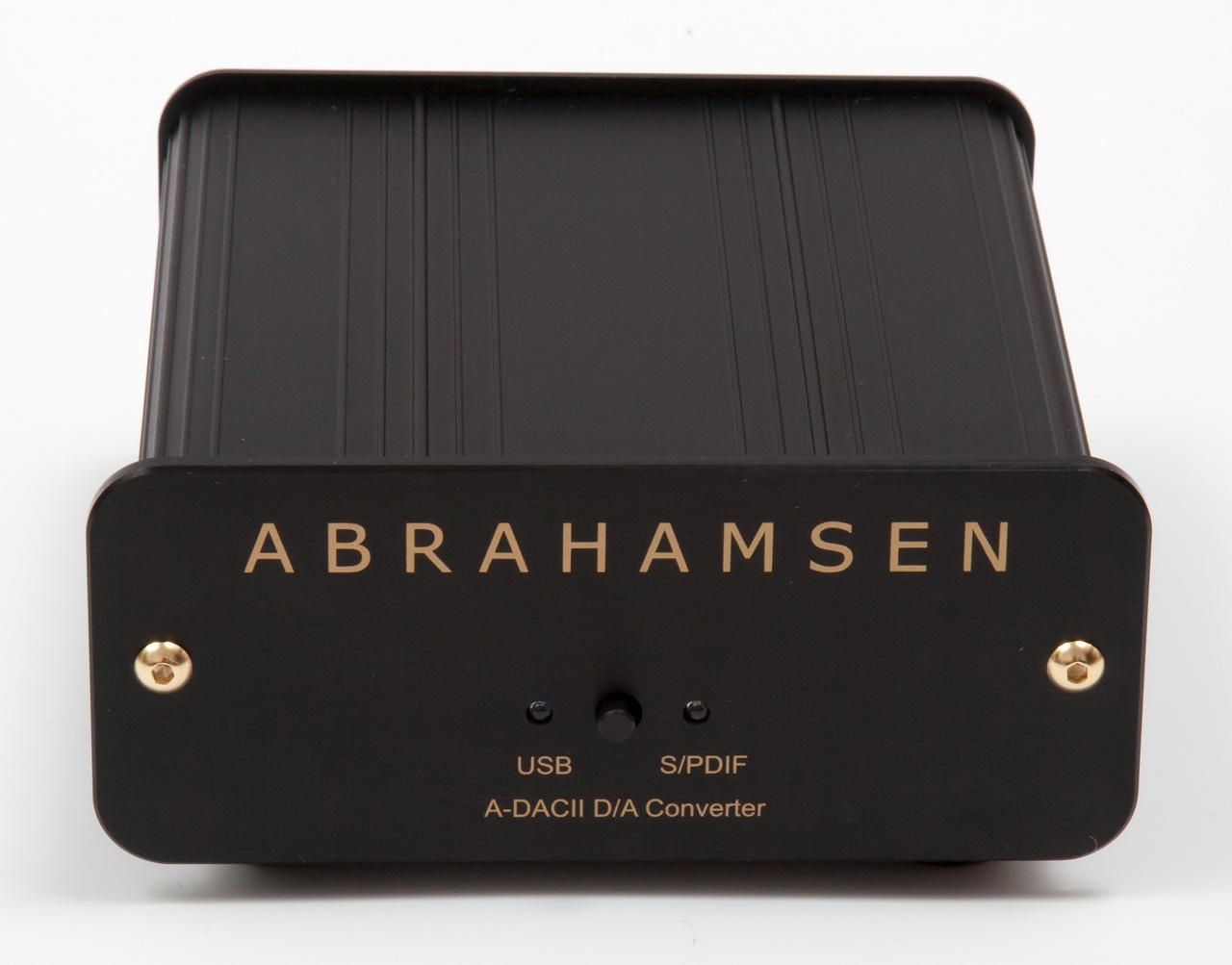 In general I liked how It did on this song. Reproduction of micro details is really impressive, actually for this price it sounds exceptionally detailed and open.

In the middle of this song is heard a loud trombone, which I consider a very good test of dynamics and sound intensity, and the transition from small to high volumes. It didn’t have problems with dynamics and agglomeration of instruments, and here I felt the limit of the stage, it is as if covered with a membrane, making the sound a little more intimate and more round.

The songs from Taraf de Haidouks were the big surprise.

Especially on the song ” Foaie verde, foaie de trifoi ” I felt so much energy, so naturalness, the sound has become so personal and intimate in a way that I felt goose bumps.

Listening to this song, without wanting it, I started to move my feet and hands, head staggering slightly.  A little bit more and I would have got up to dance.

The DAC represented successfully  the  message this song wants to convey. The sound was natural, meaty and lively, and the instruments were played with precision. This DAC has a relatively long and pleasant decay on musical instruments. Contrabass was heard down till sub-bass regions, accordion and violin and was well contoured, representing the mid frequency slightly forward, like inspiring life into the music.

I think that this DAC was clearly made for listening to music for hours without getting tired, it wasn’t made to analyze music and all hidden subtleties.
High frequencies were played pretty well,   but   sometimes I want them to be a little more extended. It plays treble so that is not abrasive or annoying, I would say it is even slightly liquid sounding.

The device sounds more HiFi and more detailed than Asus Xonar Essence One or any of the small FiiO DACs.

The sound of this DAC reminded me very much of the sound of Electrocompaniet PD-1 of which I wrote about some time ago. Even though it has a much smaller footprint and more compact, soniclyspeaking, it has much in common with the bigger PD-1 DAC.

Currently it can be purchased from the manufacturer’s website for a price of ~ 270 Euro and I can say that it is among the best DACs in this price level. Its performance exceeds the asking price. 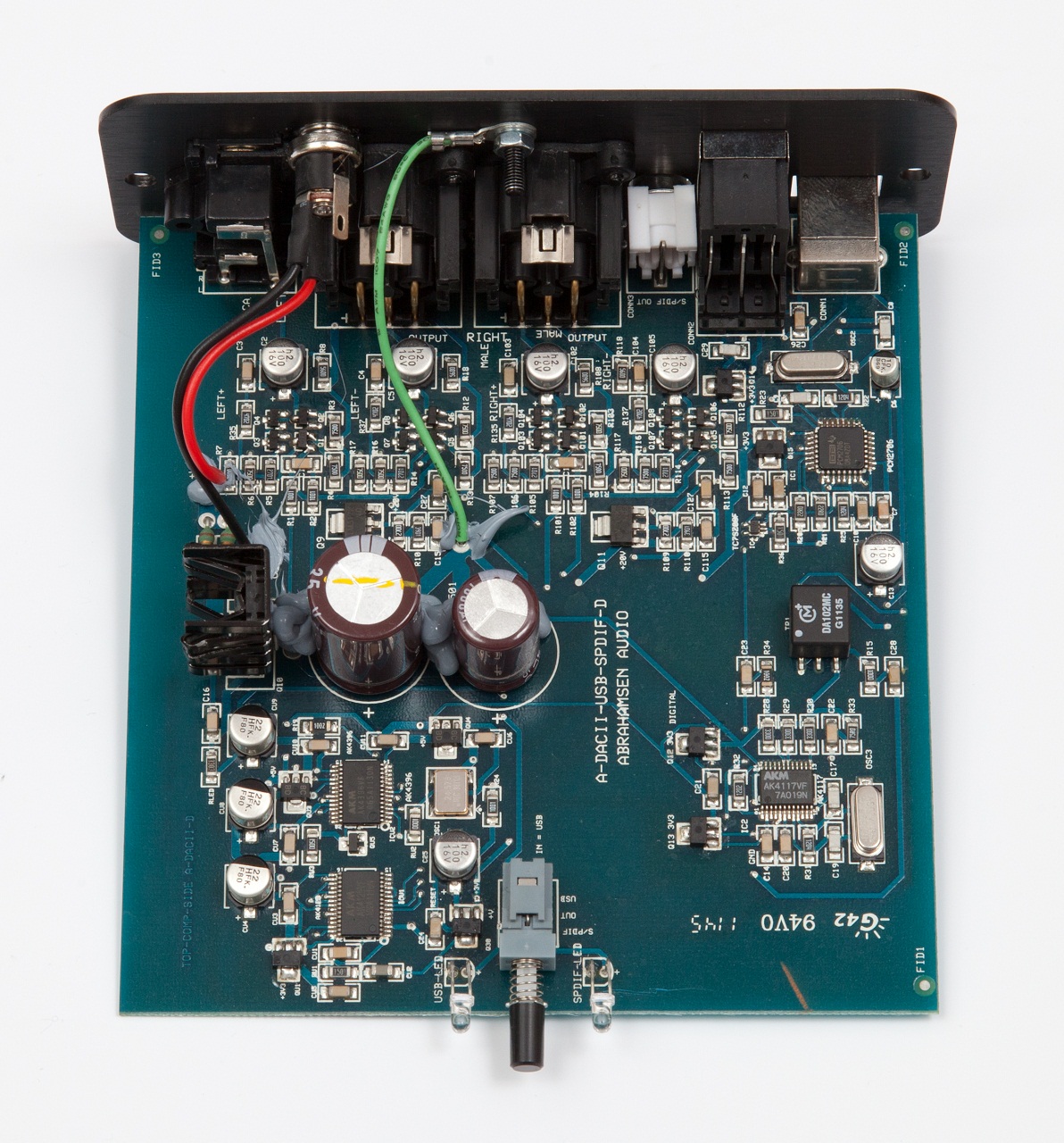 A-DAC II has proven to be a well thought product that provides high fidelity sound.

Build quality is also good, has all kinds of inputs and outputs in a box so small, and the strength point is that it can be used as a dedicated transport for a more efficient DAC, eliminating noise from the PC.

Its performance is undeniable and quality / price ratio is unquestioned. I would not wonder if I’d compare this DAC with others in the 500 Euro area and small Norwegian DAC would face this challenge.

Musicality and fatigue free sound is a great plus, so the music can be played for hours without any problem.

I am grateful to Per and Thomas Abrahamsen for the test unit sent, for the confidence and professionalism shown.  It was a pleasure to listen to this small but sturdy device.