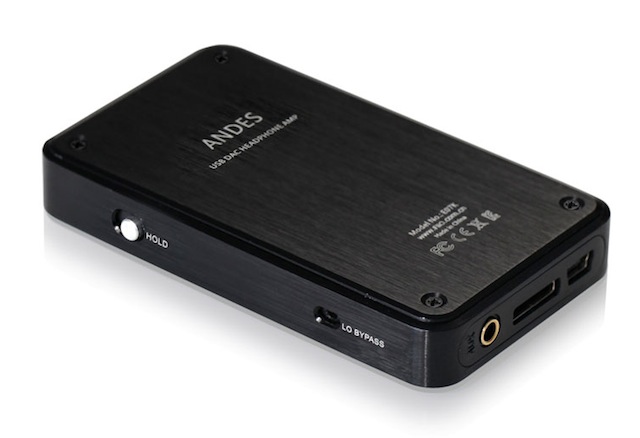 Another review on FiiO, but this time will be for the new product: E07K. FiiO came into force on audio market with new products and surprises us more and more often.

FiiO E07K is the rightful successor of E07 and from the words of manufacturer majority of circuitries were changed, rising them to the standards of E17.

The device is using the same components that are found in E17, digital to analog conversion and dedicated amplifier section being derived from it. The only difference is that on E07K are missing the chips that are dealing with coaxial and optical input, E07K having only one single digital input: USB.

I am pretty sure that majority of users don’t need more than a single input (USB), so because of this some production costs were cut, this way E07K were born. 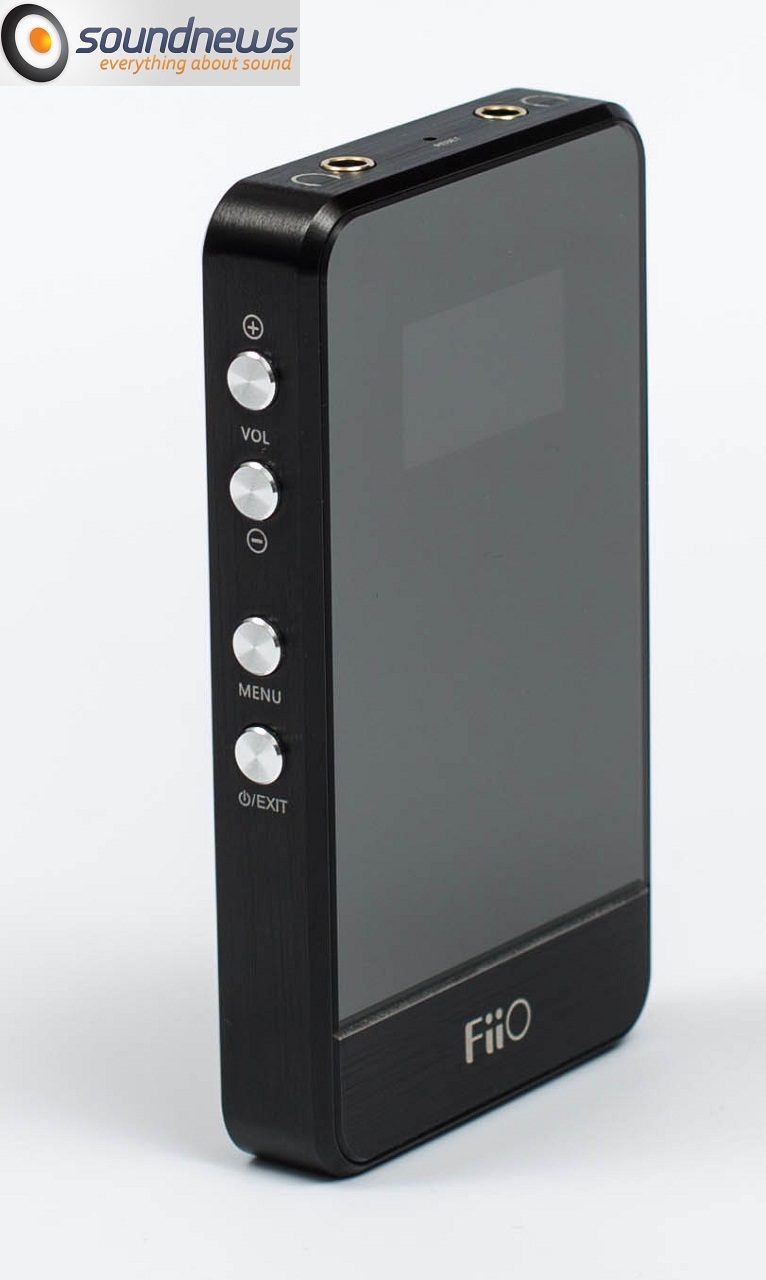 The little device has the same intuitive menu as E17, where hardware EQ can be found allowing to adjust the quantity of bass and treble, gain level and of course digital volume. The “input” button misses that is found in E17, this way it can now be used only as a DAC and amp if USB input is used, or only as a headphone amp if the analog input of 3.5mm is used.

The construction of E07K is solid, black anodized aluminum, front panel being covered by glass almost entirely. In the box accessories are found: carrying pouch, rubber protecting case, a mini to mini cable, a mini USB cable, 6 rubber feet and 2 rubber bands for attaching it to an portable mp3 player or to a mobile phone. 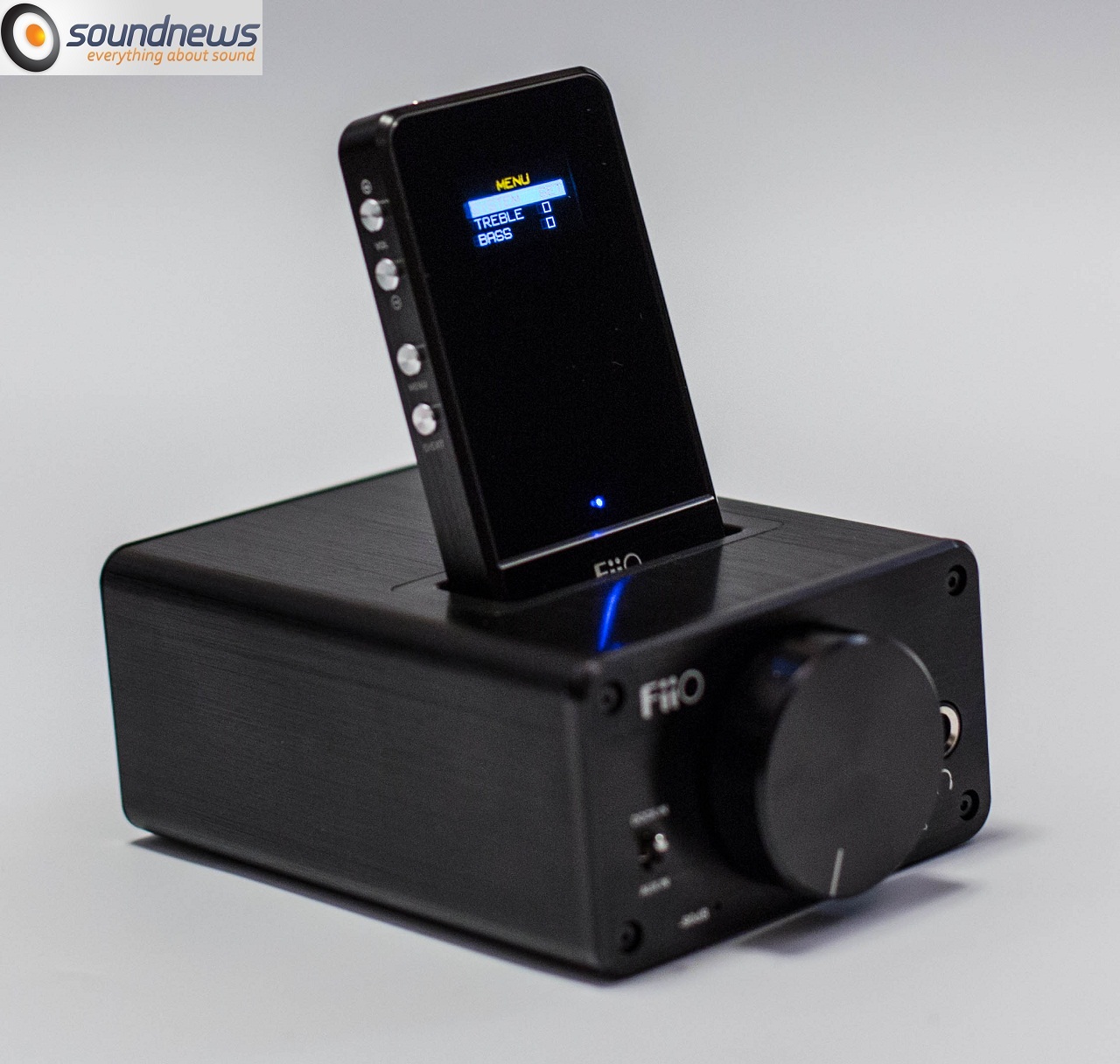 What I know for sure is that E07K sounds almost identical with E17, my attempts of founding some sound changes failed. I also did some blind tests to be sure, both units have a very alike sound signature.

One single disadvantage comparatively with E17 is only a technical one, E07K having only a single digital input and E17 two more additional inputs. Regarding sound quality it is the house sound of FiiO.

The sound is full of substance, smooth, easy on the ear and in the same time having a fast tempo and a good bass kick. The sound is presented more on the analog side than on a digital one, as a whole being pleasant and unobtrusive.

It is much appreciated that in place of the combo coaxial/optical input of the E17 manufacturer added a second 3.5mm output, now two such outputs are present. Yes, it is true, now two pairs of headphones can be used in the same time – an interesting feature for fast comparisons between two different pair of headphones or just when a two persons want to listen to music in the same time.

If two pairs of headphones are connected in the same time, the sound will not degrade and the power output is not lowering, device warms a bit more, but the sound quality is not suffering.

The small device has enough power for hungry headphones, as how are Sennheiser HD800, Audeze LCD-2 or LCD-3. On all 3 models I have used mid gain (6 dB) on 50-55 volume (from maximum of 60) and obtained good results. 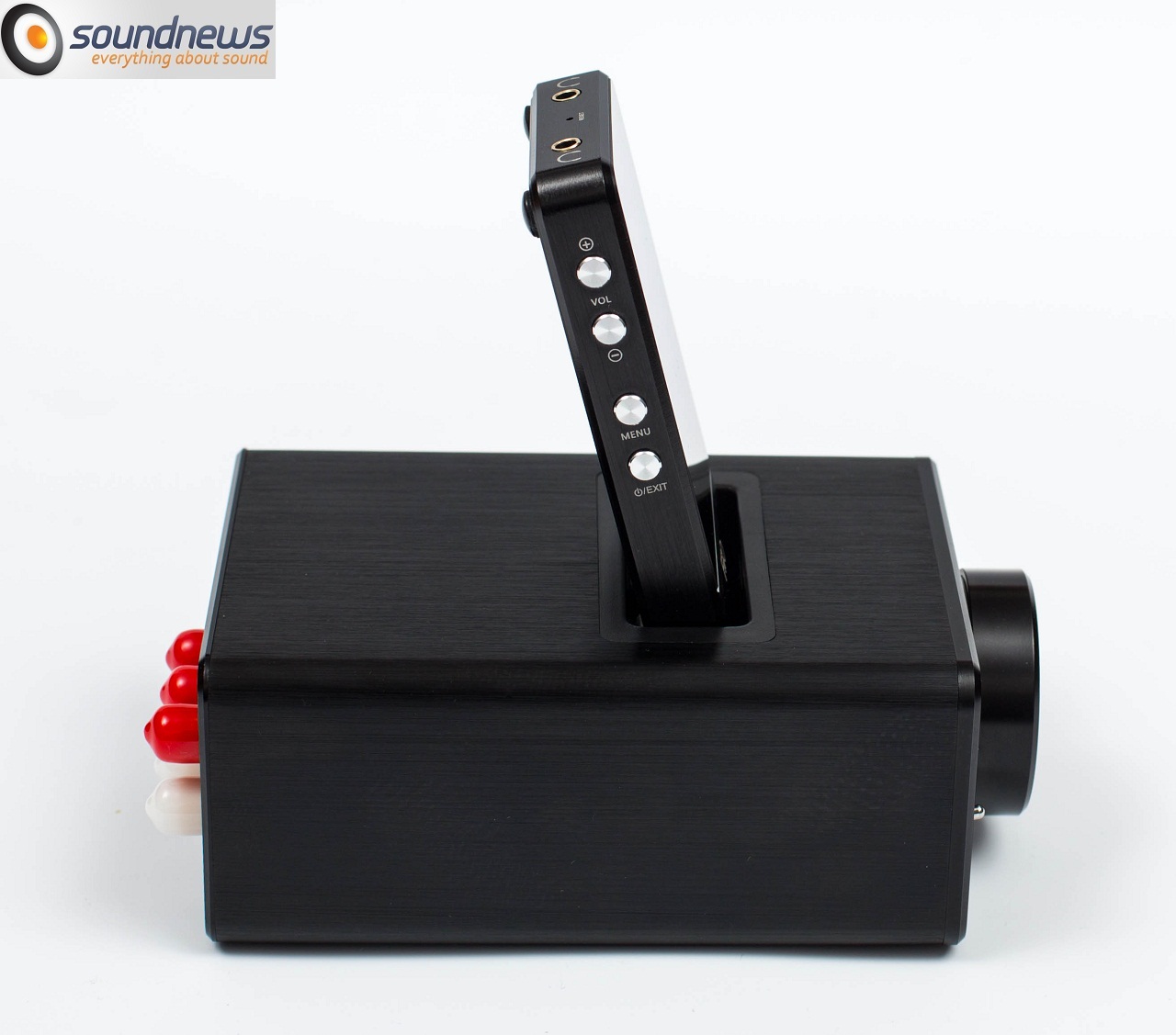 Obvious cons concerning music playback I didn’t found, device has the same sound that lifts your mood quickly and the same fun factor as on other FiiO products.

Bass and mid frequencies are predominant and are a little bit more accentuated, but exactly because of this the sound is more natural and more silky as we like it. The lows are descending quite deep without losing much of the control or power, slightly lifted mids are making voices sound sweeter, piano, trumpet and violins sounds fuller and better defined.

Even if highs are airy and extended, they are not dry or scratchy. Here and there extreme high frequencies are a bit rolled off, as if it would be a semicircle that rounds the sound after 18Khz zone.

Gratifying is that the sound is not veiled or foggy as some DACs are doing (hello Creative X-Fi HD USB) and as a whole the sounds doesn’t want to be a super technic or forced. The final result being a relaxed and easy sound, without touching the frequency response or tonal balance.

The small DAC/Amp knows how to add a bit of color to the music. Owners of speakers or headphones with a pale and dry character, with aggressive highs or insufficient bass will love this interesting device.

I tried several music genres, but in the end I awoke listening only to fast and energetic music which reflects the ability of this DAC/Amp to work very well with more lively music. I want to add that in congested passages it doesn’t lose the frequency control, musical instruments are not hitting each other, everyone has it’s spot in the space around the listener. 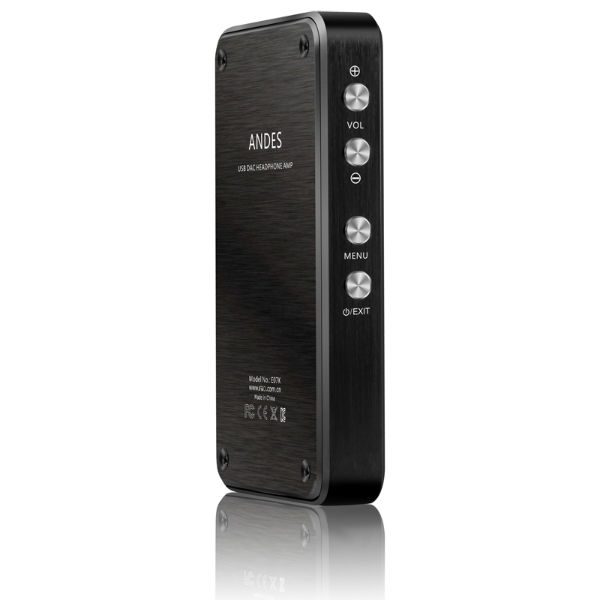 On slow music (post-rock, jazz, blues, a little of folk) the DAC sounded as good, relatively big soundstage didn’t suffer too much, stereo image being well defined, only on some complex tunes (symphonic sonatas)  is is felt a small alteration of stereo image, the sound having a large soundstage on a two dimensional plane (left – right), but loses height and depth, sound becoming more 2D than more expensive solutions.

I used it also on the street powering Ultimate Sound 3D CIEMs and Sennheiser HD-25 II headphones and obtained very good results. When using US 3D I tuned the bass a bit for a better oomph and a better attack, I also obtained a more extended sound in all directions. For HD-25 II that has an impedance of 70 Ohms I didn’t use EQ, gain set on mid offered a freedom in choosing the right volume. With both headphones I have got a richer and fuller sound, more articulated compared to my mp3 players output. I’m sure that it can drive even more power hungry headphones than in my case.

Out of curiosity I’ve used also E09K amp connected with dedicated dock and was pleasantly surprised that it works without any issue. When using “lo bypass” then E09K fully controls the small E07K, power on/off, choosing volume and needed gain setting being controlled only by E09K. Together this combo rises the performance for at least two steps comparing to the E07K alone, the sound gaining absolute control, bass has more authority and as a whole the sound is fuller and more precise.

As in case of E10 and E17, the E07K brother supports maximum 24bit/96Khz files and knows to play music in Kernel Streming and Wasapi output, both being the choice of any enthusiast audiophiles that used the PC as the transport. 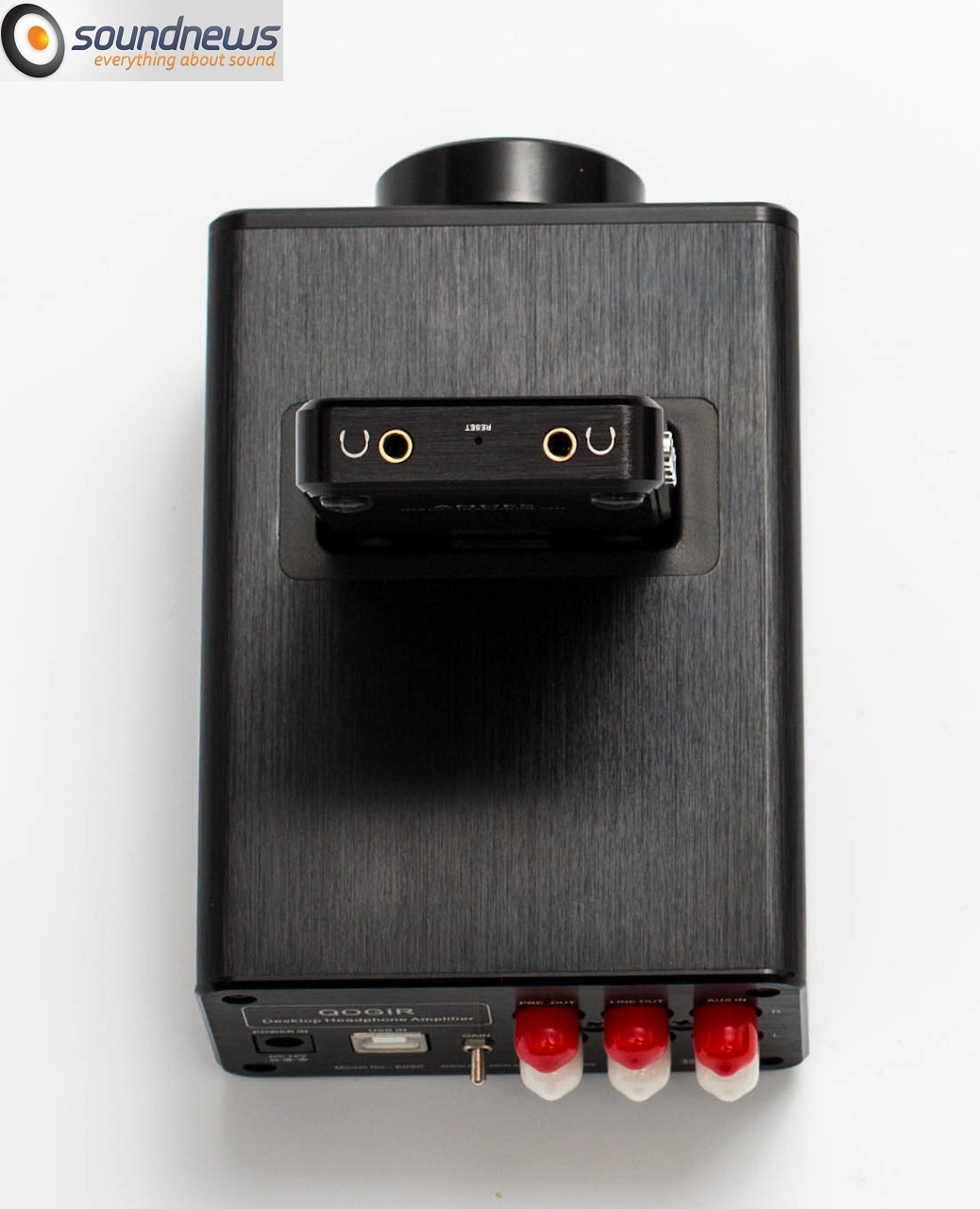 A small but quite potent DAC and a headphone amplifier in the same box.

Display is intuitive and menu is easy to use, build quality remained unchanged: black aluminum combined with glass on the front, nothing to reproach.

I recommend with confidence this device, at this price level I do not know any internal sound card to sound as natural and easy on the ear as this one.

–          Solid construction, multitude of accessories from the package

Gear used for the review: 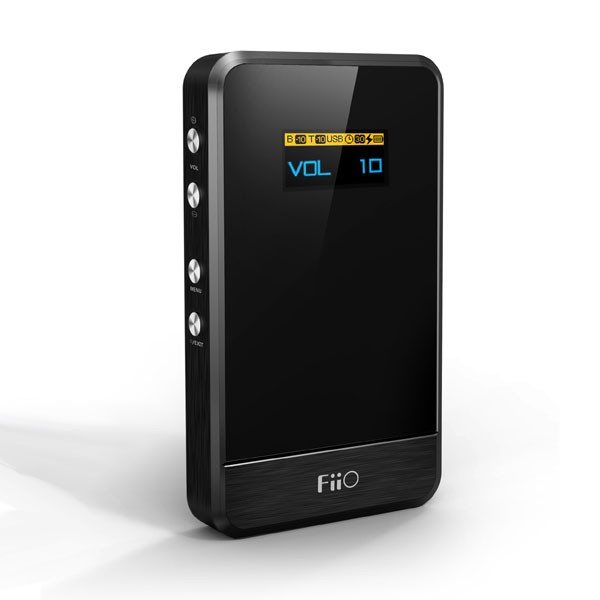