Chord Electronics –one of the heavy players in the industry, are celebrating 20years from the launch of DAC 64, a revolutionary product at that time, based on FPGA technology. To mark this anniversary number, the British producer has decided to launch a memorial product & so it was designed Chord Hugo. A trailblazer like its predecessor, Chord Hugo is also unique from many points of view.

It’s hard to use a single name for this device, because it does so many things, that I don’t know where to categorize it.

The device has small dimensions, about the size of a today smartphone, but it offers so many functions that you can’t believe it’s real. 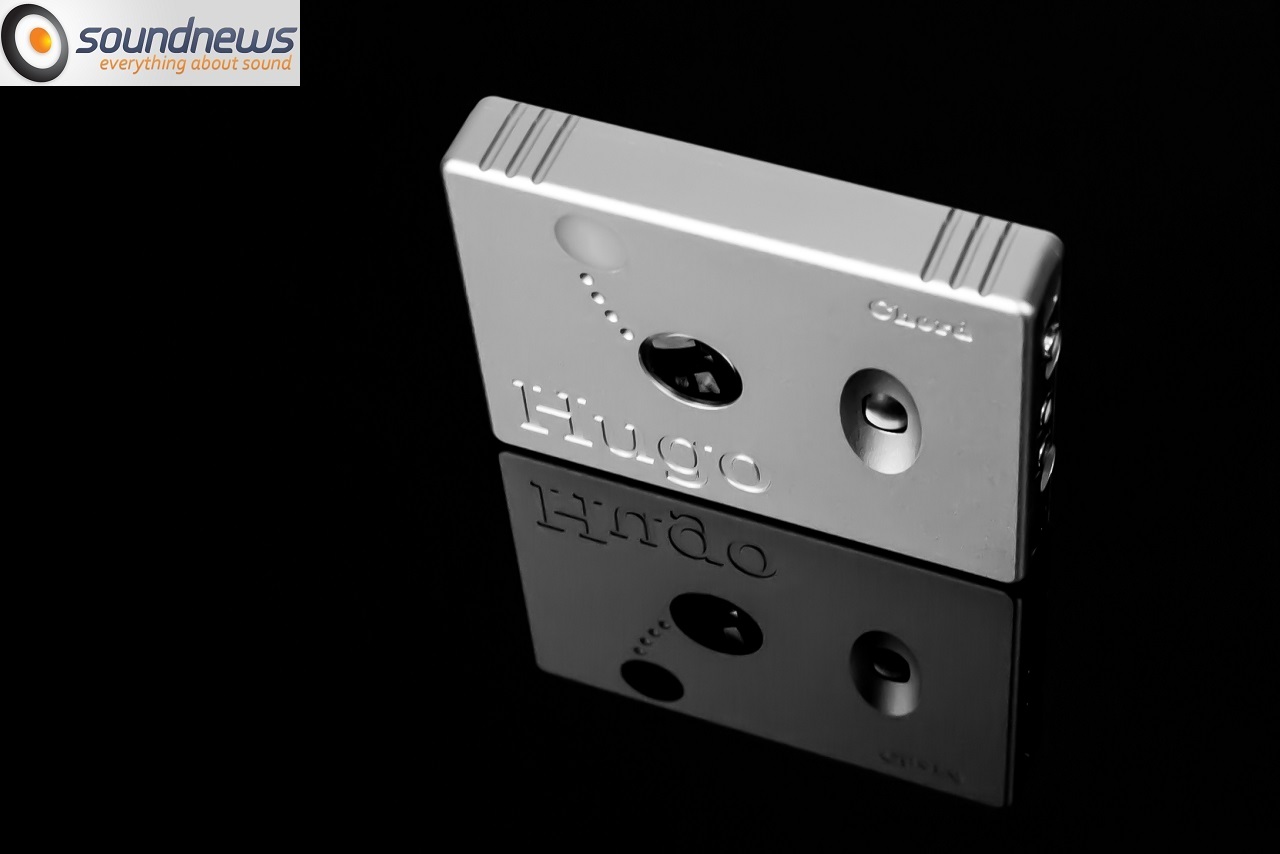 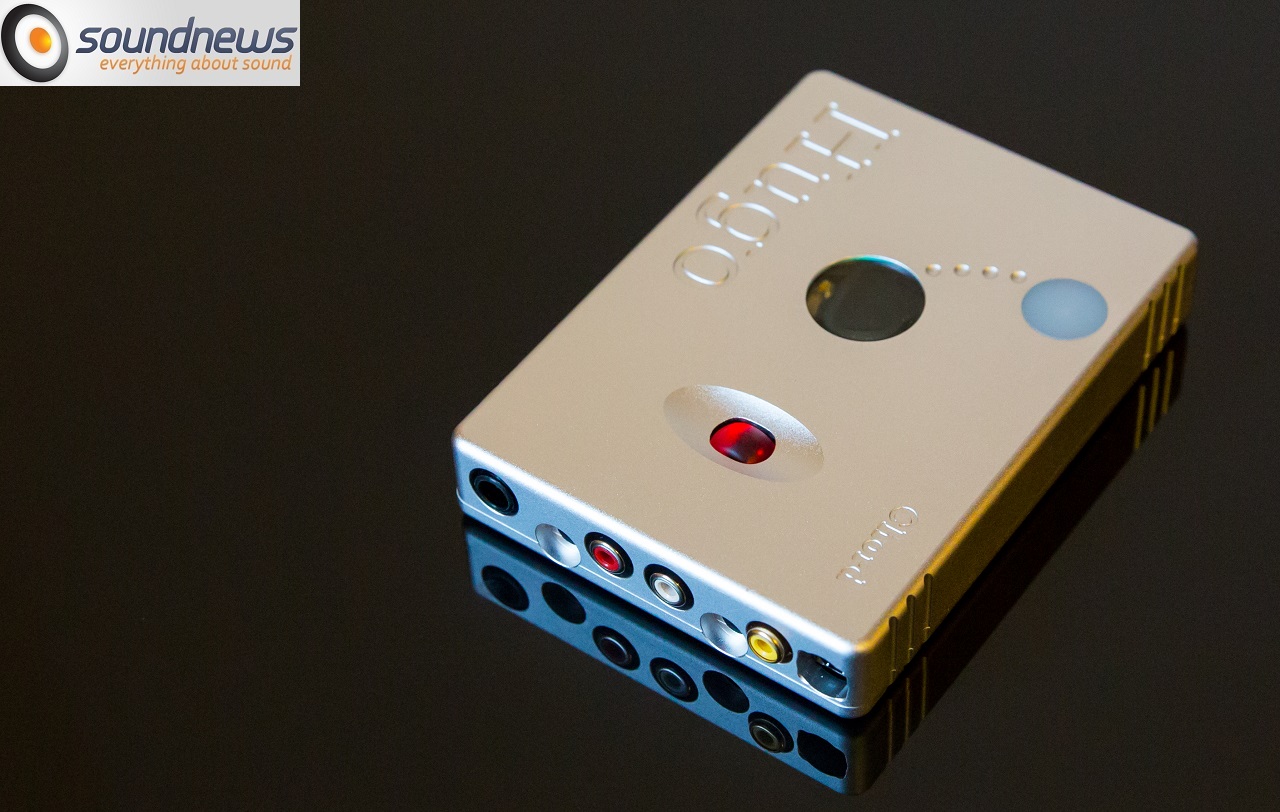 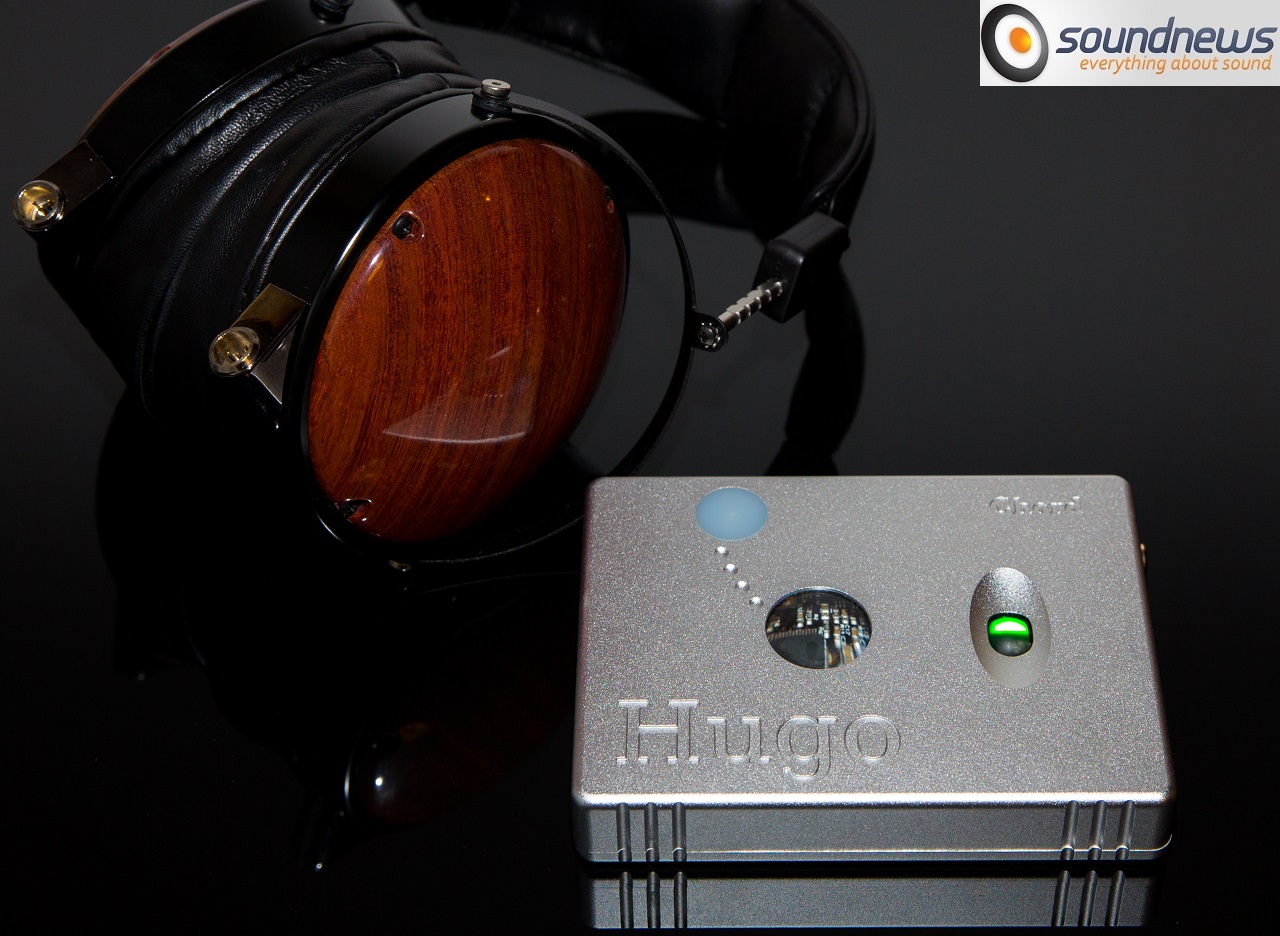 Hugo is a high performance DAC for PC/Mac, it’s a DAC for Android & iOS, it’s a high quality headphone amplifier, it can be connected via Bluetooth, it uses A2DP protocol & audiophile codec aptX (the best at this moment). Hugo knows to playback all types of audio files & here we talk about PCM until 32 bit /384KHz & DSD 64 & 128 files –called DXD.

And let’s not forget, it has a battery, which in normal conditions keeps you going for about 12hrs.

It looks like a little wonder when you see it, the wiring termination is at the highest level, I suppose more connectors than that couldn’t have been physically set for the front /back panel. We have 2 USB connections (one iOS/Android & one PC/Mac) , an optical & coaxial input, 4 analog outputs (2 for 3.5mm, one of 6.5mm & one RCA) & the Bluetooth aptX connection.

Don’t be misled by its dimensions. Even with the Chord badge on it, I was a little reticent about its performance, until I started to check how it was build & where its concept has been designed. 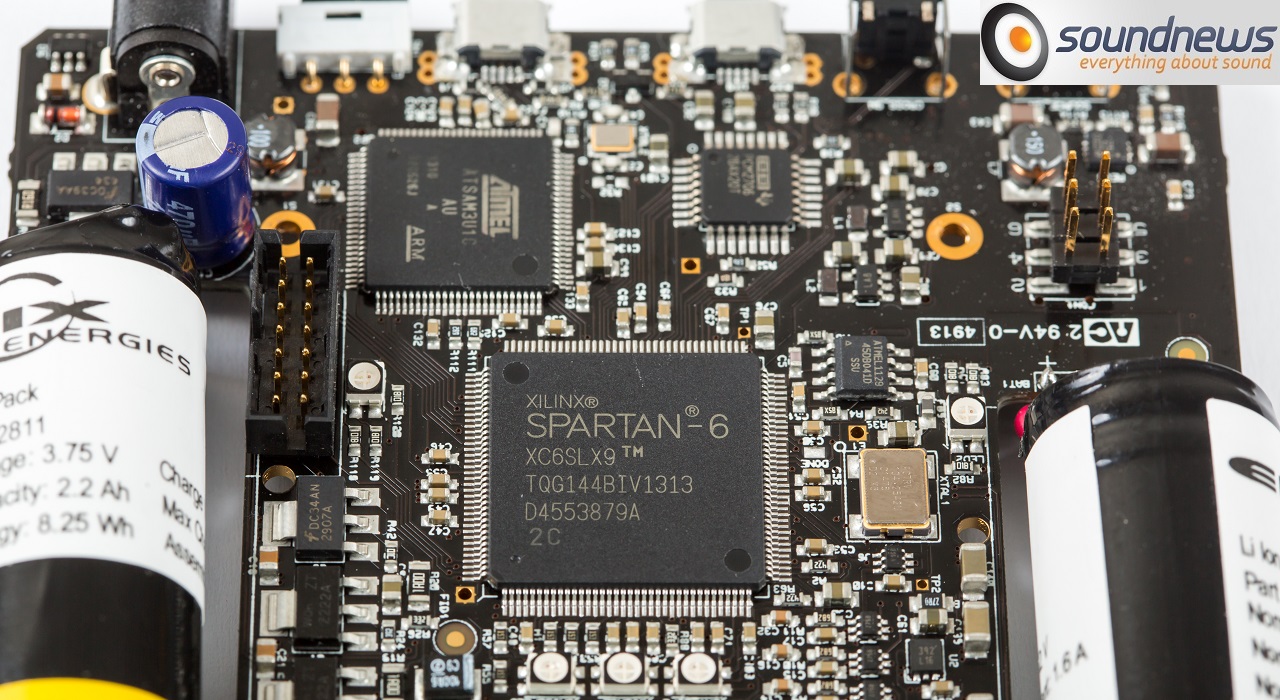 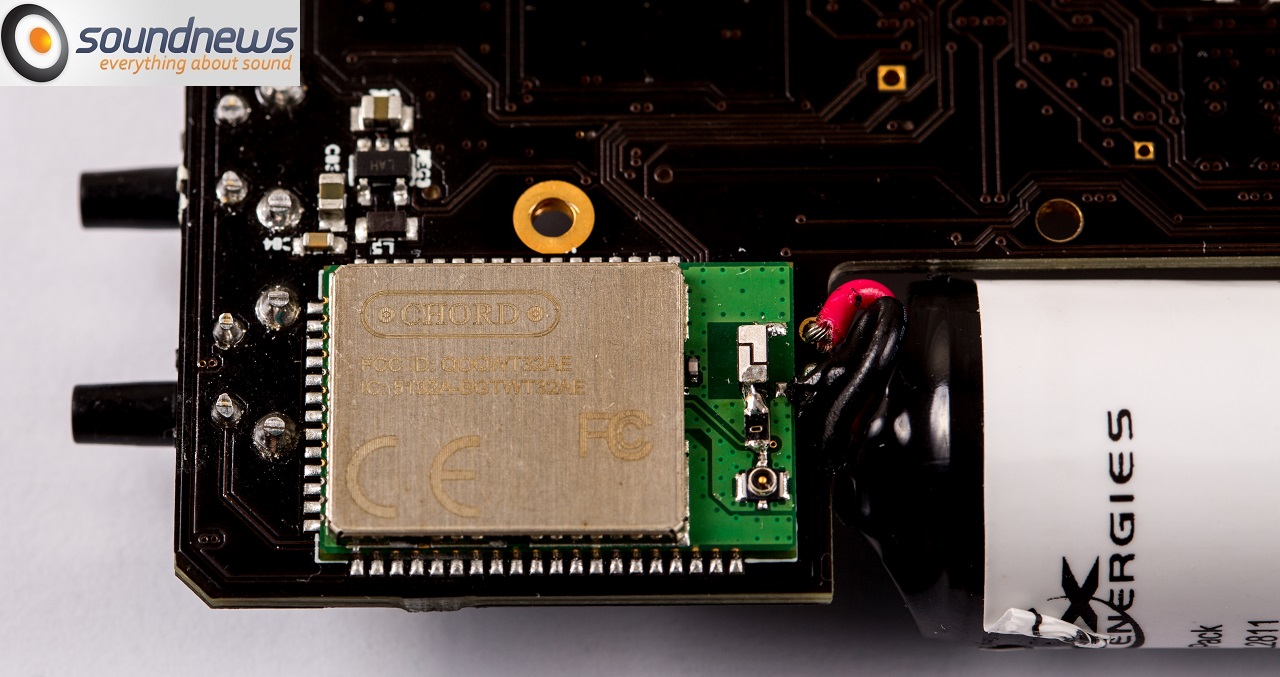 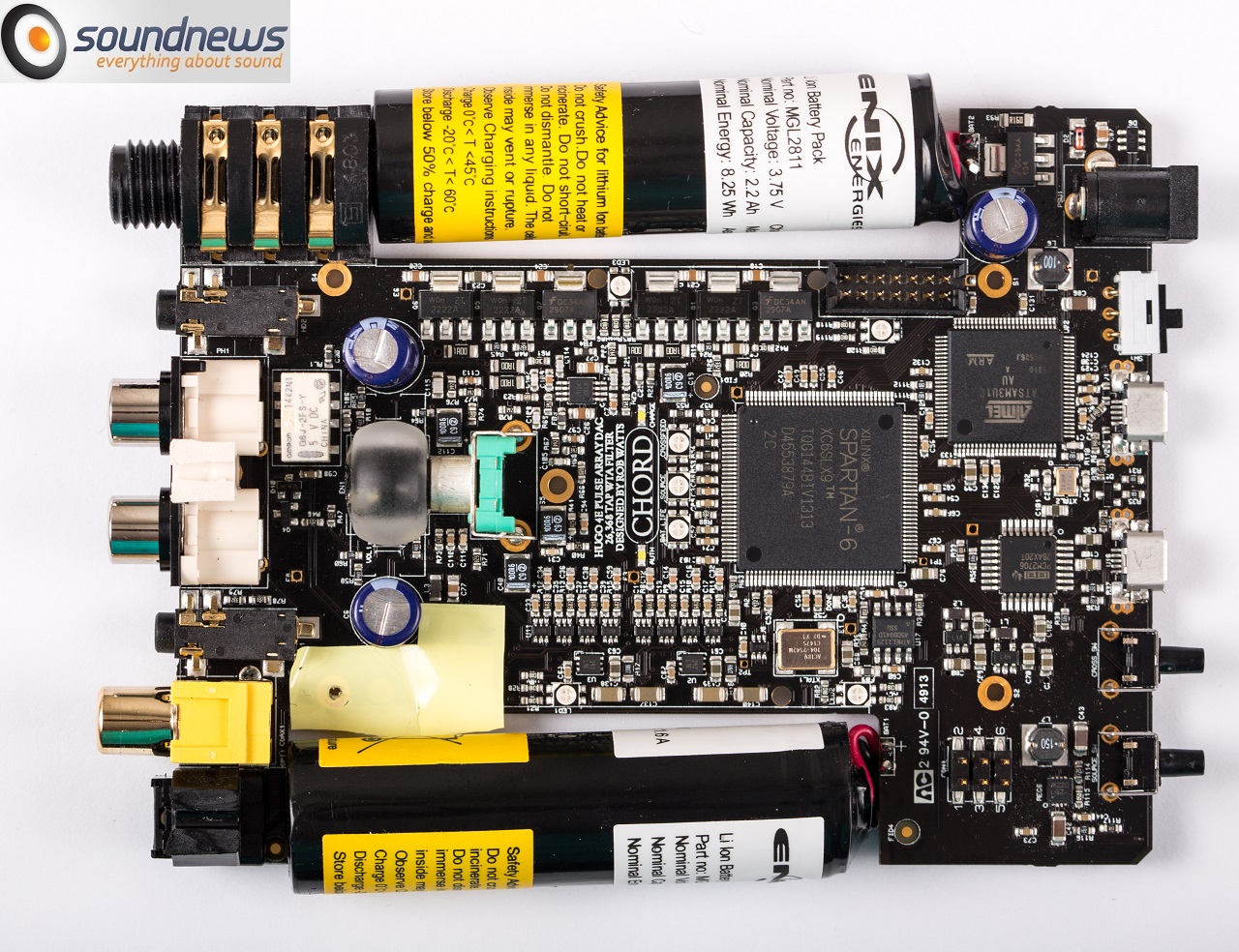 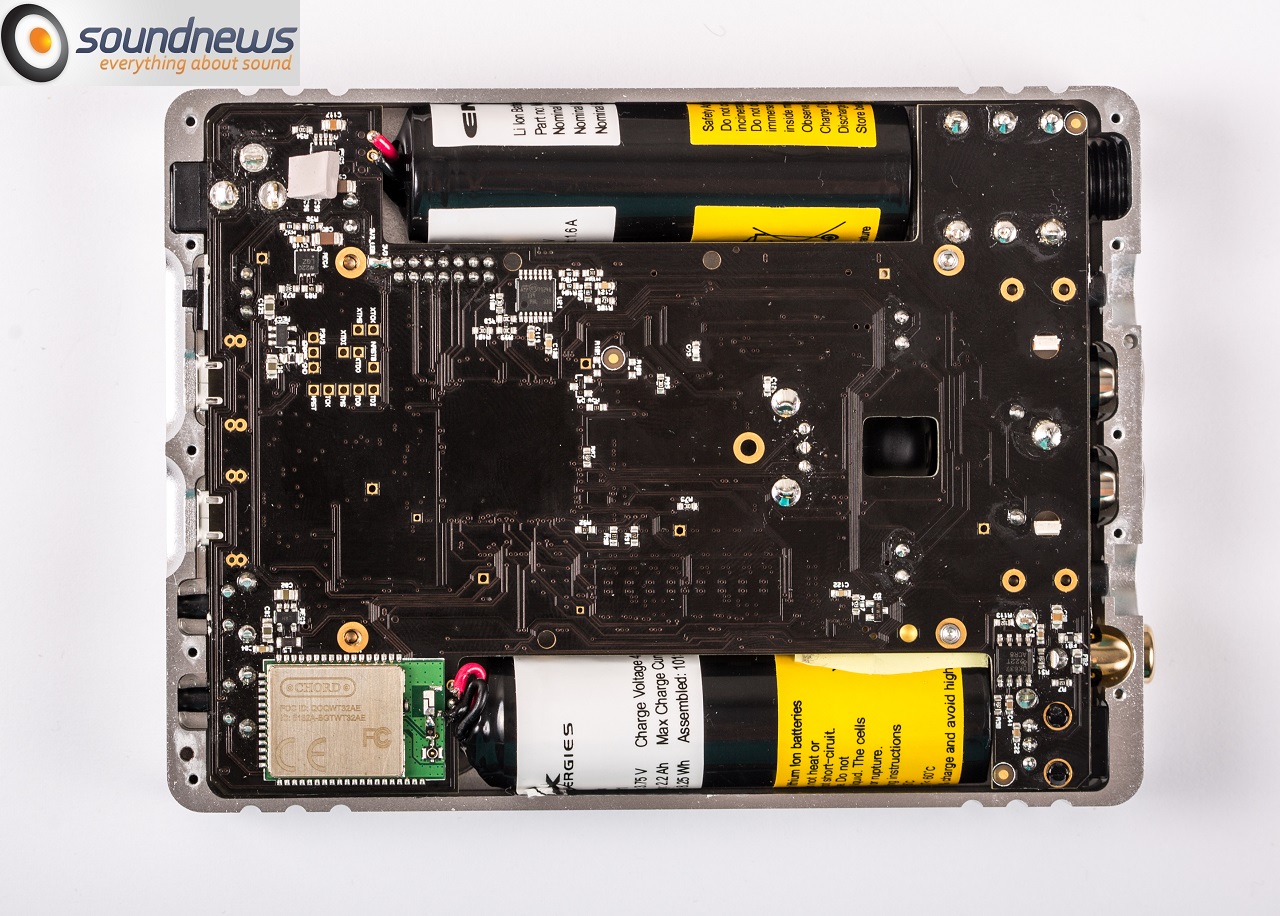 Hugo uses same FPGA technology as in the high end DAC – QBD 76 HDSD, but QBD76 has a tap value (processing power) of 17,000 while Hugo – 26,000; impressive figures are due to latest generation of FPGA  Xilinx Spartan-6, which uses less current than the older generation & thus it can dissipate heat much more efficiently.

Amazing specifications don’t stop here, harmonic distortion (THD) is at -140dB & the headphone amplifier can give a volume of 110dB for headphones of 300 Ohms!

Are you already impressed or not? let’s go to the part we’re talking about sound, ‘cause I can’t resist anymore! 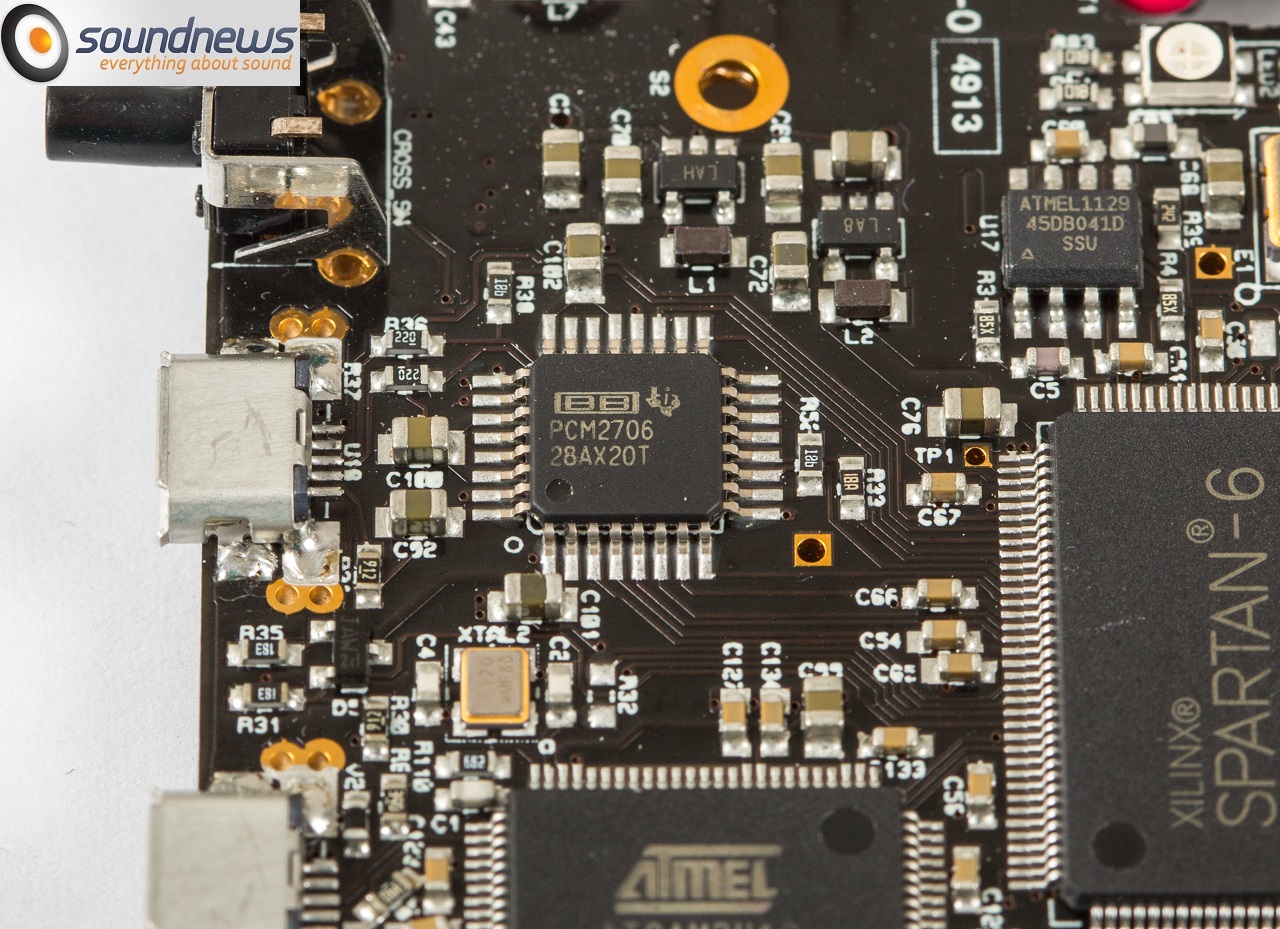 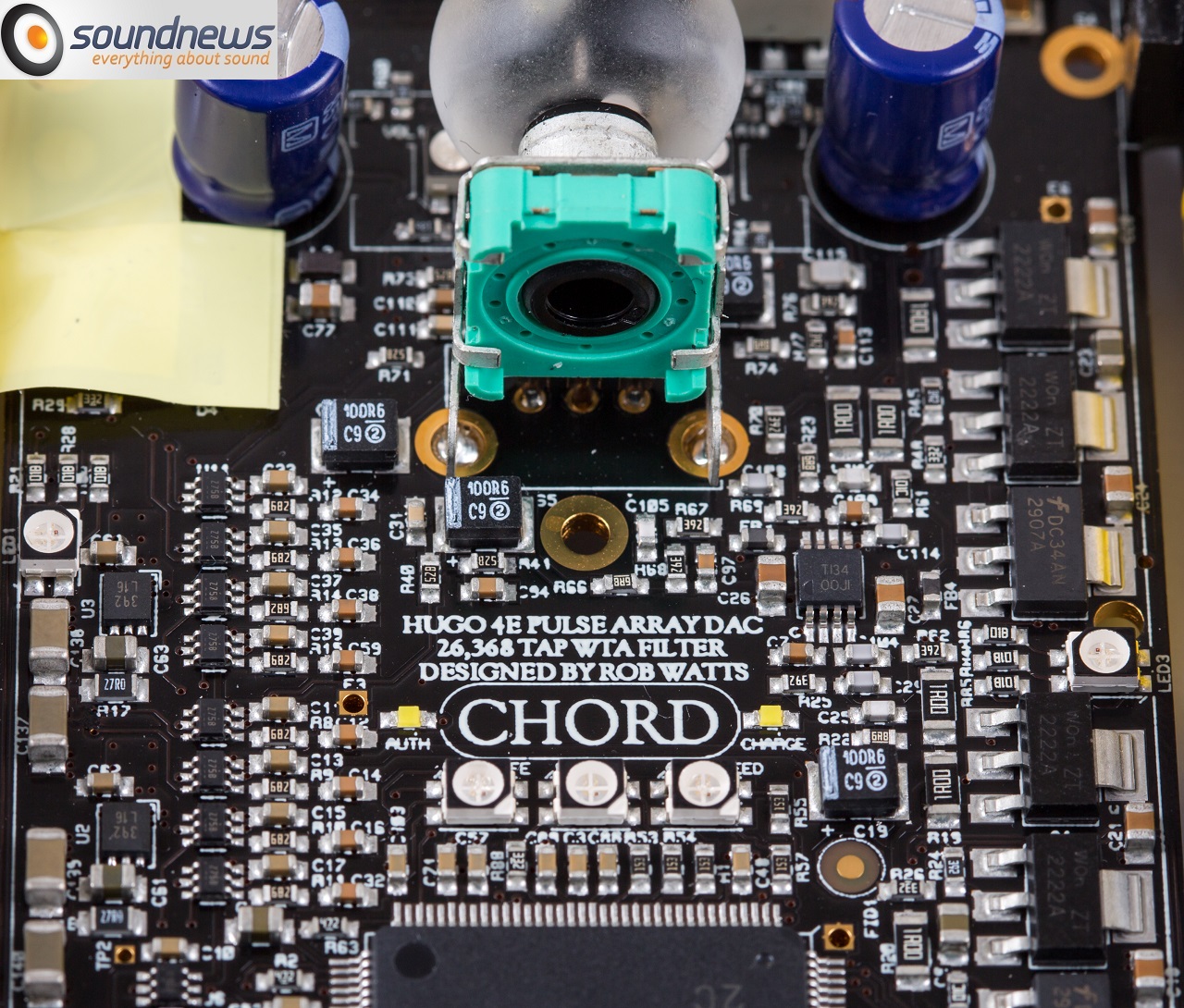 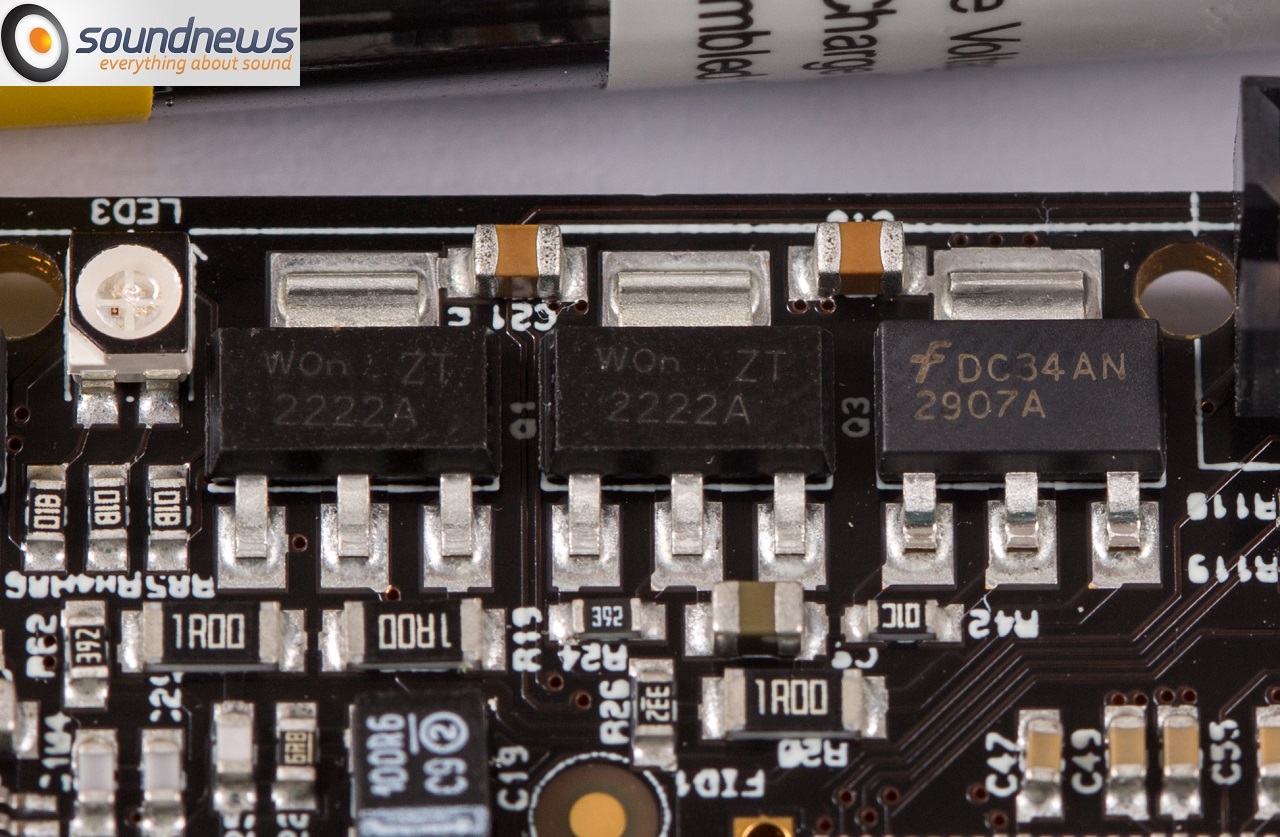 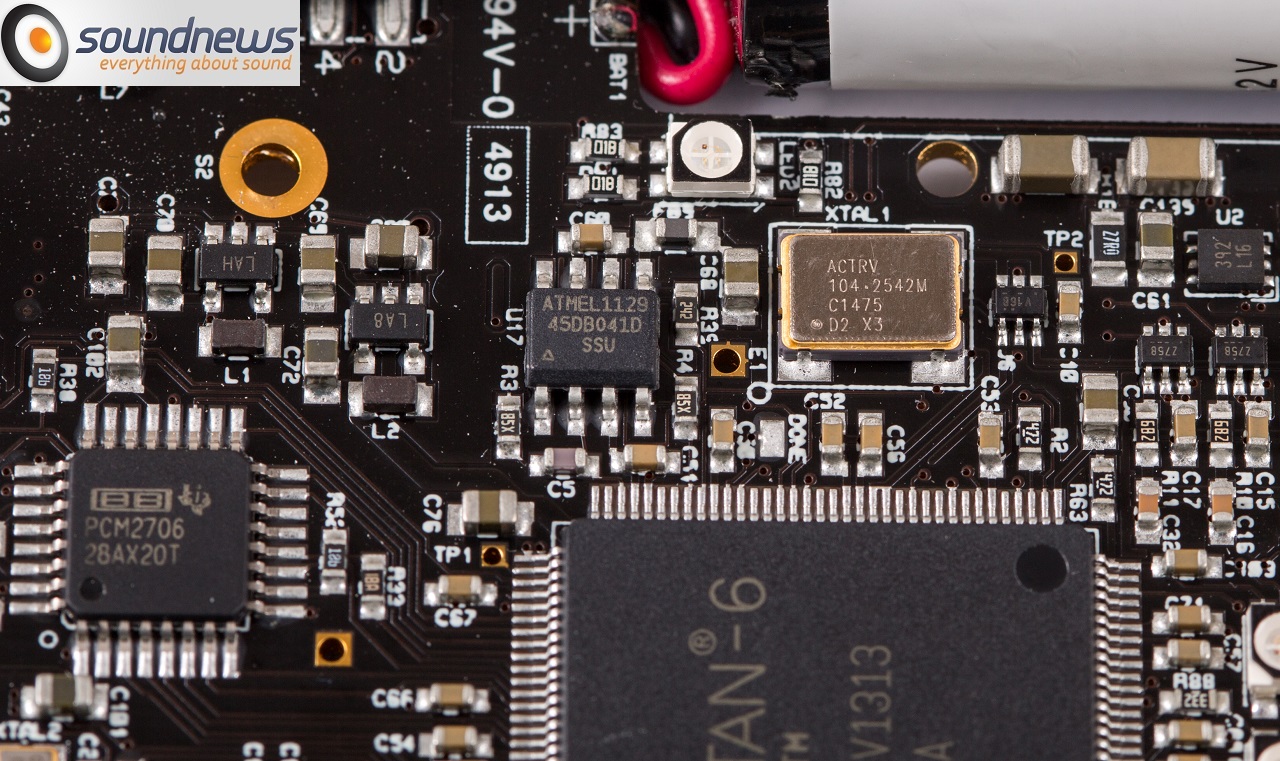 A big smile showed on my face on the moment I hit the play button & legs started to move slowly, the right feet bouncing rapidly, while the left leg was running behind in rhythm.

I had heard a sound which I usually hear in very good or truly exceptional audio gear.

I came across a very rare & interesting thing, probably now it was more evident than never.  Listening to music I had had the impression that Hugo seems to hasten the music, as if it knows what keynote follows, anticipating the next sound. Little Chord seemed to know beforehand the tune it was about to play –it is very hard to describe in sentences. My eardrums received a steady sound, as if there were a strong connection between all the sounds of the tune played. There are DACs which agonize to sound coherent, quick, dynamic & keep up with everything that follows. Hugo does it all very with a disarming ease, as if it would be a sports car that goes 50 km/h, but inside yourself you know it can go with 250 km/h without any issues. Dynamism, speed & liquidity are the keywords through which can be defined the little Hugo.

It has been said many times that if a DAC is precise or very detailed, it is automatically catalogued by everyone as being a device without soul or without melodiousness. Hugo is at the same time musical, alive & also very detailed, even surgically sometimes.

I’ve hold it in my hand, I was staring at it & I was asking myself how the hell did they made it so good & so small.

I’ve used Hugo with Audeze LCD-3/LCD-XC, Sennheiser HD800, Sennheiser Amperior & with Sony MDR-1R, so I can’t comment how is its performance with other high-end headphones, but on what I’ve tested, it was a match made in heaven.

The volume was loud enough to shake my eardrums – I didn’t feel that it was a top notch headphones’ amplifier, but it had guided easily LCD-3. I think a big & heavy home amplifier will lead LCD-3 a tad better, but Hugo was always closest to that reference & that ultimate control.

Listening to Black Sabbath – Complete Studio Albums in 24bit/96khz I had dynamics, punch, well defined bass & medium, while high frequencies were detailed & not abrasive. Paranoid album sounded extraordinary well. With my eyes closed I had understood that it gives a background as a black hole, sounds coming from nowhere, from vacuum.  The size of the stage was quite impressive, I hadn’t feel as if sound would crash against an imaginary wall, it simply flowed towards me.

Chord are well known for the fact that give a well airy, detailed, full, clot & less coloured sound & Hugo makes no exception.  Listening to Led Zeppelin – Mothership I had felt naturalness & a rich sound, that instantly teleported me into the 70’s. Hugo sounded very alive, natural, the guitars were alive & the drums shake my ears for the next hour. I simply didn’t have anything bad to say about old rock, it sounded exactly as I wanted it to, the dominant naturalness & well accorded dynamics made me listen to some more albums of my favourite band.

There are some devices that one tries to find some fault with, to look for bad things about them, but slowly & surely one realises that you’re gonna fail, that you’re not gonna find them, the minuses –so it is with Hugo. 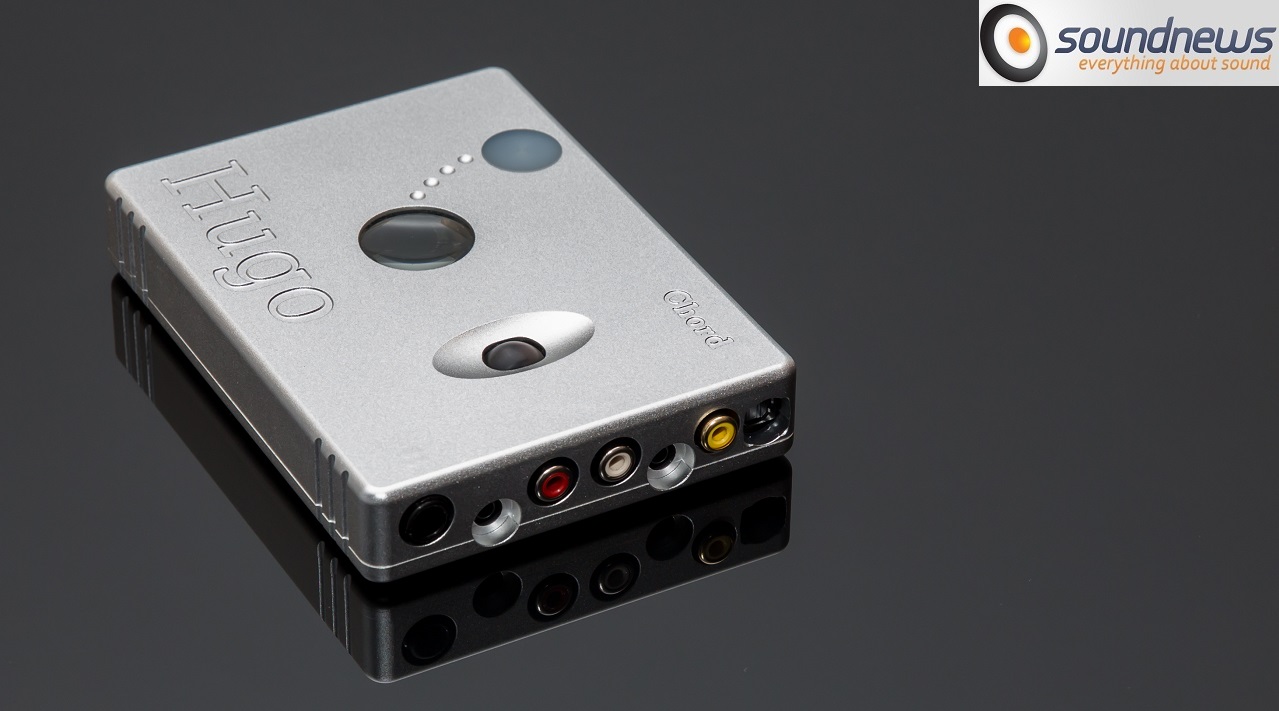 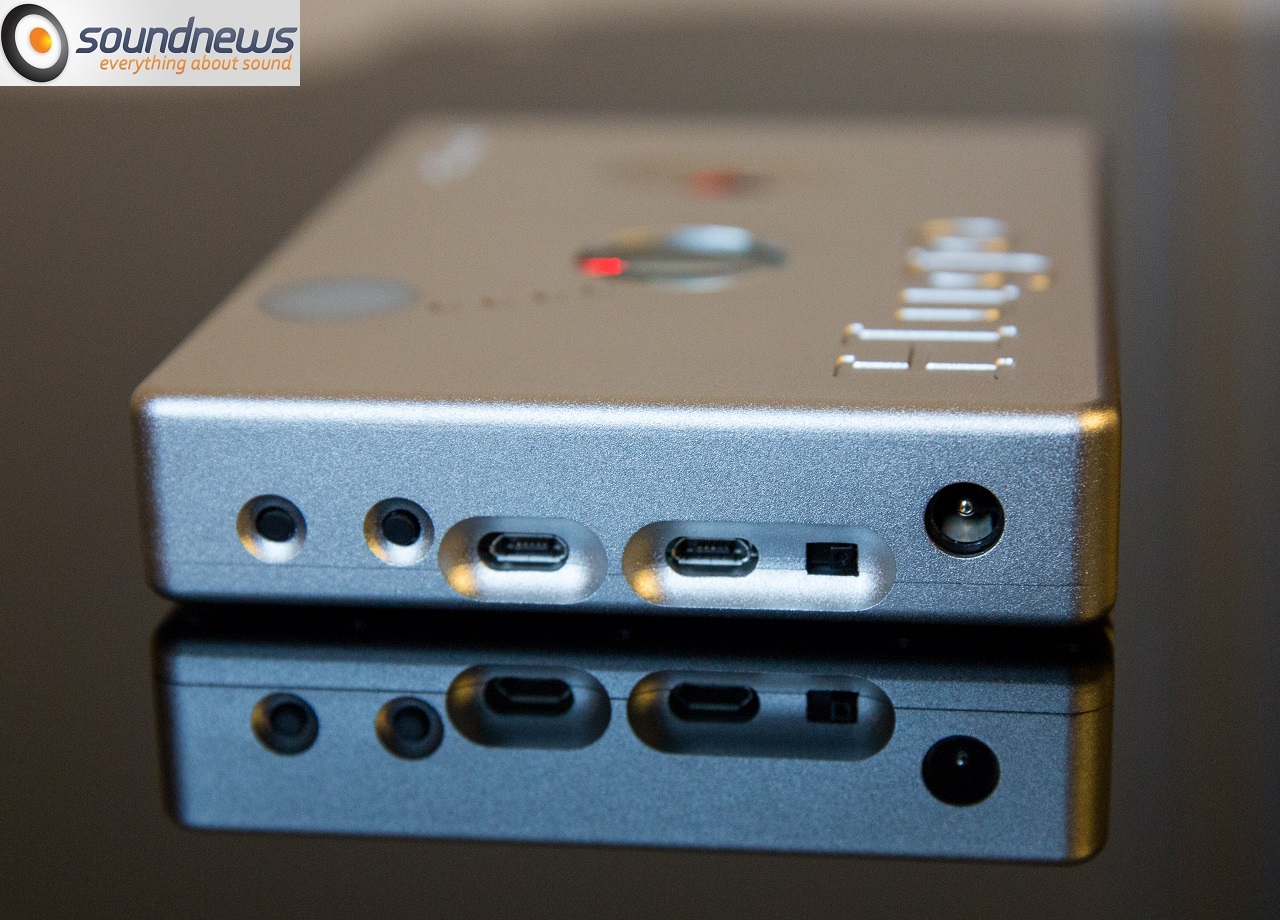 I personally find the design a bit awkward, the rainbow lights & the number of lit leds when something is played, I don’t like the RCAs –there is too small of a space between RCA jack & the shell, most of the RCA connectors won’t match, coaxial or thicker interconnect cables won’t match. And I stop here, because I love the whole rest. Its sound capabilities are excellent, definitely on par with or even above 2,000€ DACs I’ve had listened to.

There’s one more thing. Although I can’t say it exactly, I suppose that its neutral character & the frequency spectrum quite linear tells me that Hugo wouldn’t match too well with sibilant systems, if you have the rest of your electronics or the speakers /headphones less sibilant, probably Hugo wouldn’t hide these shortcomings, it will emphasize them more.  Hugo by itself is not sibilant, but very honest & candid in a way with all music played.

I didn’t hear high frequency sibilant, scratchy or with dry sound, but with some setups there might be slight traces.

At the end of my days together with Hugo I said I could try some Balkan music – Gothart. The voices, violins, accordion immediately started to tickle my ears & the small hidden sounds were tingling me. Hugo gives a large stage with a clear & well defined depth. I mean one can fly imaginary in 3D with ease, through every recordings. Using Hugo I have received the depth of stage, the width & the length, I got it all.

Listening to a tad new jazz & rock (the 90’s) I started to hear small imperfections of the mastering, like the hum on starting the guitar amplifiers or the walk through the audience of the soloist, the buzzing in the recording room & more. In other words, Hugo is extremely resolute & candid and it shows you everything that is in that recording. It doesn’t cover up the imperfections, but its nature makes it very likeable to any audition, for every musical style. Long auditions don’t induce ear fatigue –a very good sign.

I had liked Hugo & I’ll definitely lend it again in the future – it’s an excellent device from every point of view. 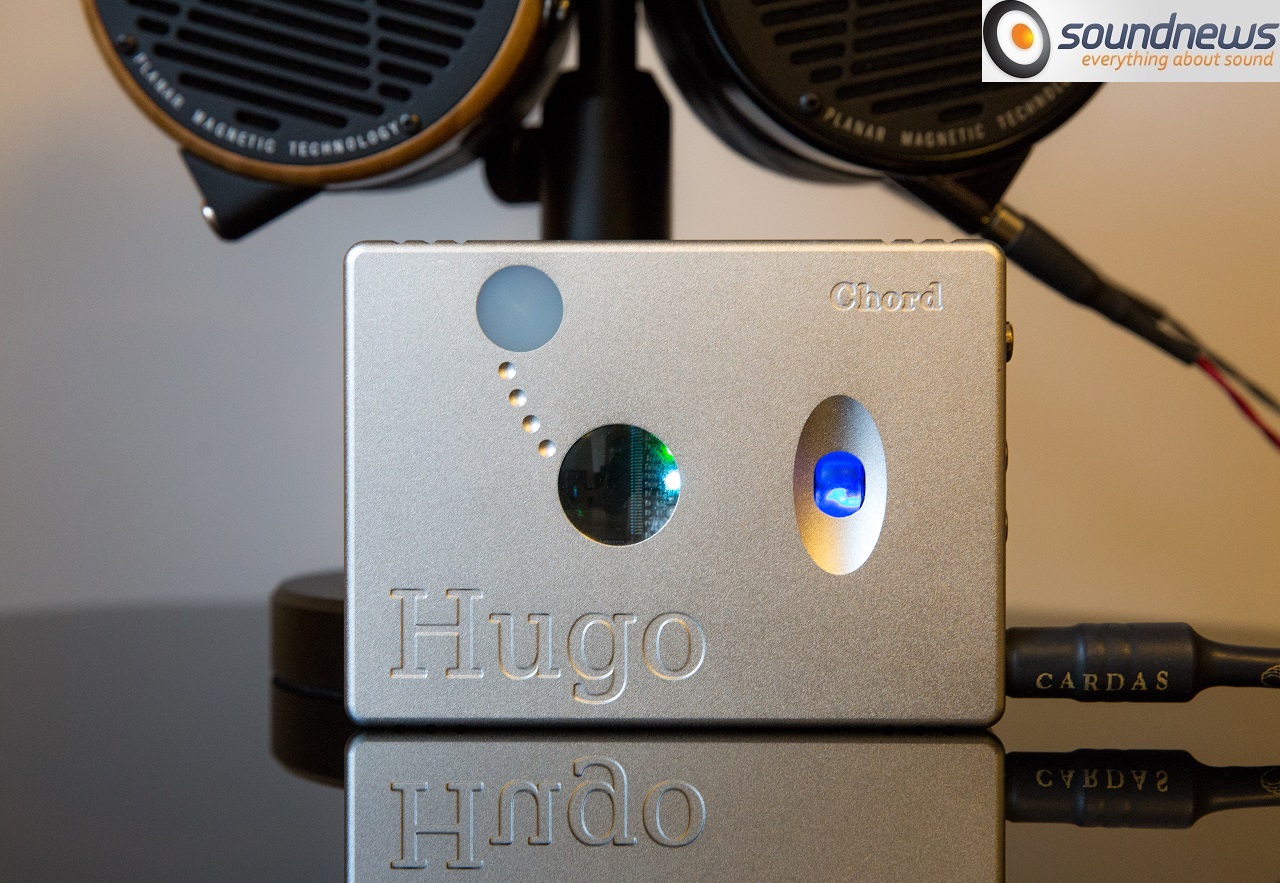 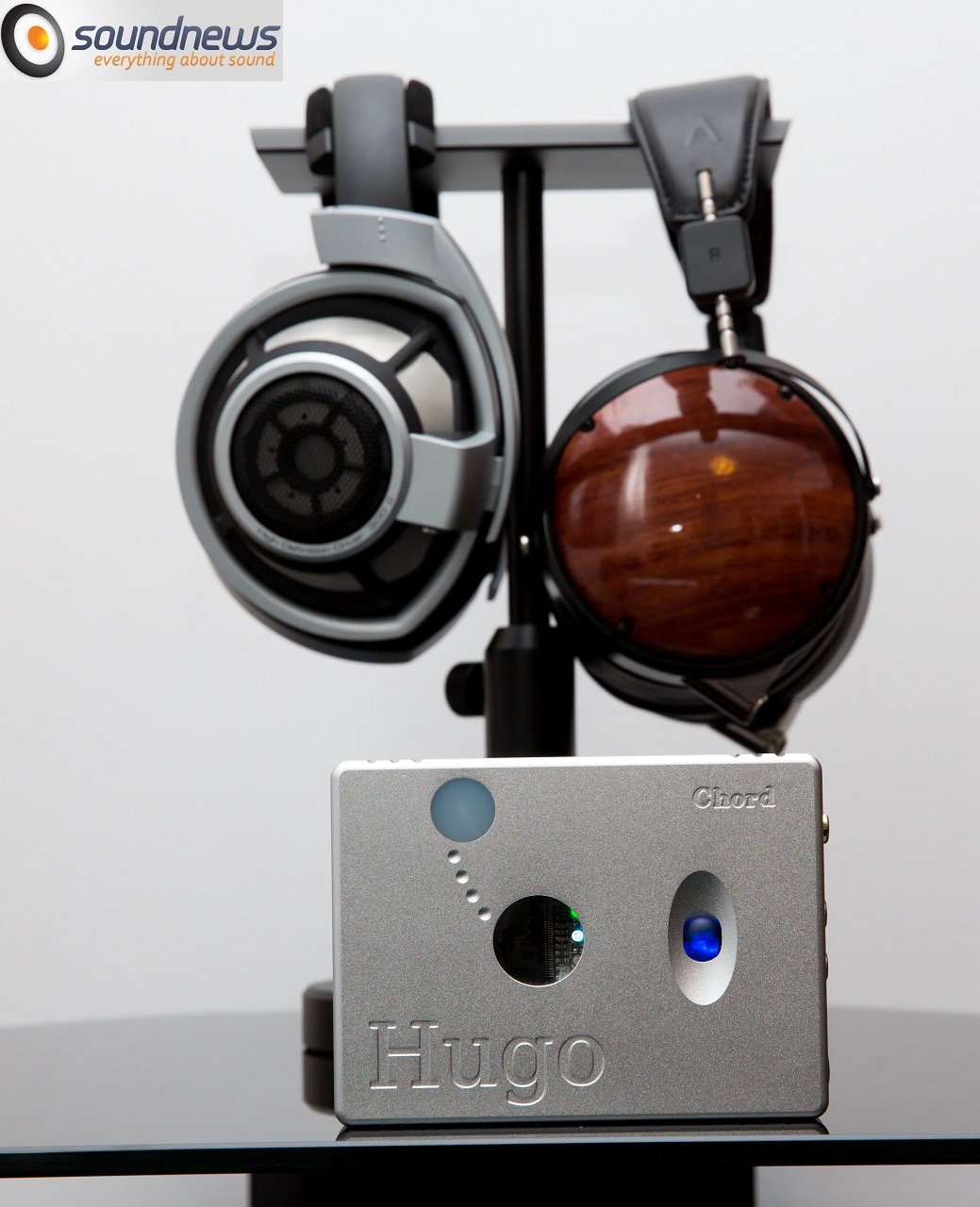 Hugo had impressed me from the first moment I had read its specifications & from the first second I had pressed the play button. Do you want me to continue ? It plays in the league of thousands of euro DACs, but comes gifted with a plethora of additional functions.

I had decided against comparing it with DACs on the same price level, but I can say it sounds as equally good or in some cases, even better.

The lack of a sonic signature makes it a device that can be recommended to almost any setup.

I was thrilled on any music style, from classic & jazz to rock & metals, Hugo offering me everything I could desire. Its odd built is lacking, but after one gets used with the coloured leds, the volume wheel which is a rainbow in its true meaning & if one learns by heart the buttons on which there is no inscription, in the end one gets a unique experience called aural orgasm™ by audiophiles.

–    Very good construction quality.
–    Excellent connectivity – you have a plethora of functions.
–    It can play any audio format, finally I can listen to the only DSD album I have!
–    Resolute sound, detailed, airy, dynamic & quick.
–    Liquidity & naturalness rarely seen.
–    Lack of dye.
–    It can run planar-magnetic headphones, I won’t even mention dynamic ones. 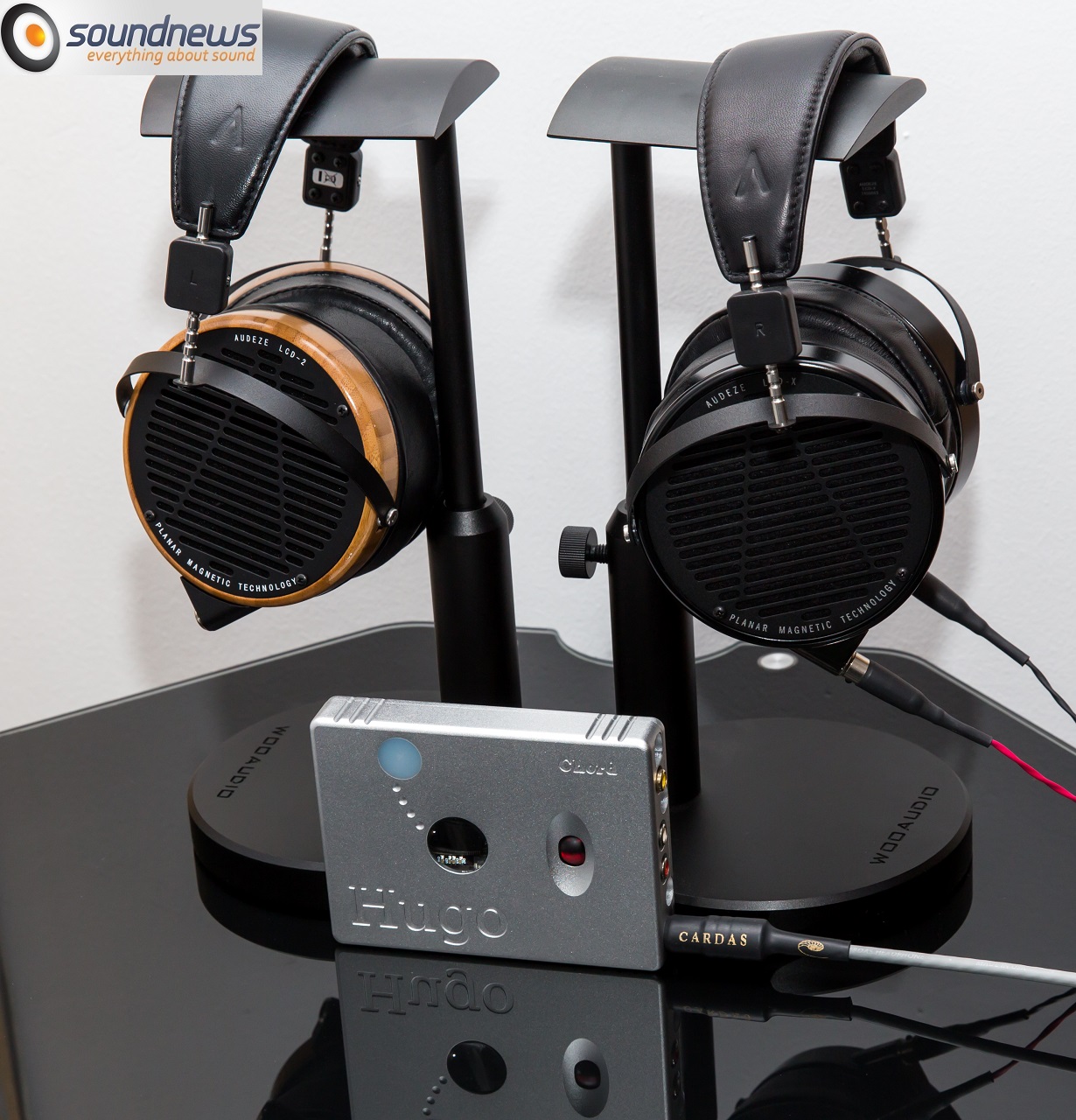 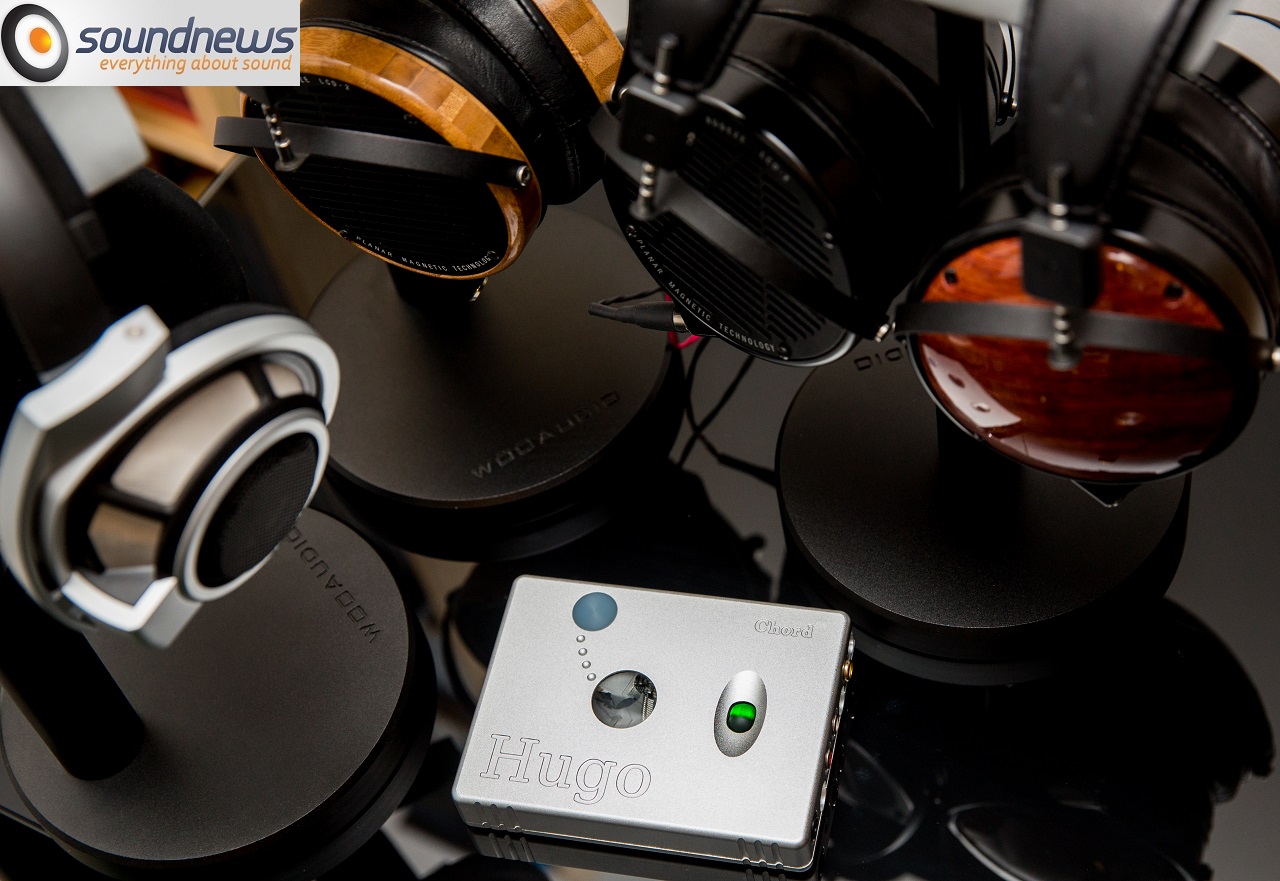