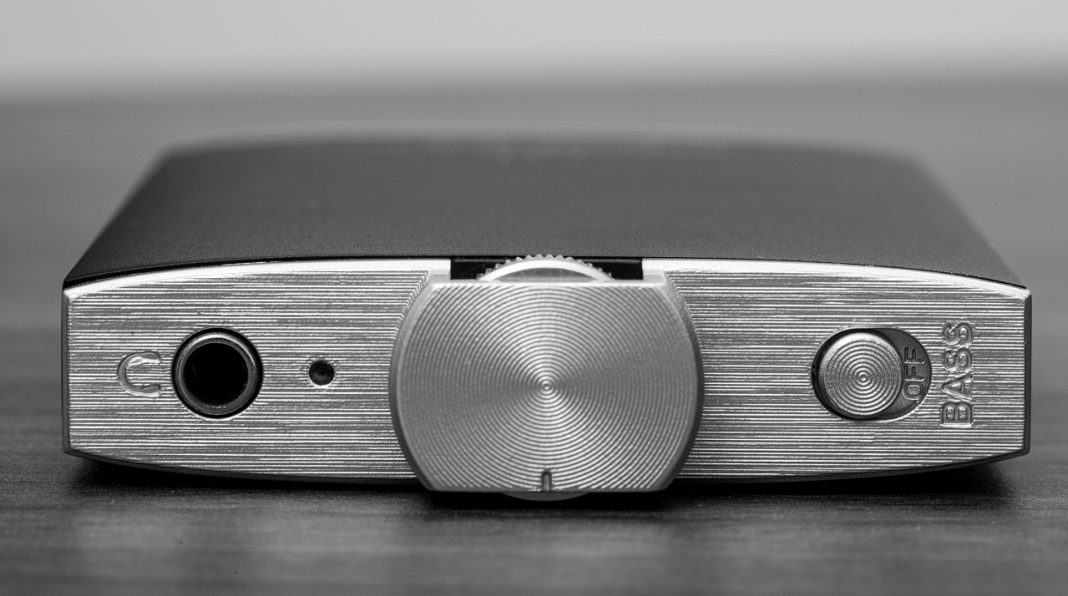 FiiO’s portable players have a remarkable market success, however the manufacturer didn’t give up developing solutions that made them famous: DAC and portable headphone amp combos
Today I will talk about such a product, newest Q1 – successor to E07K – which in turn is the successor of E07.
On the outside Q1 looks a lot like the E11K portable aheadphone amp, but Q1 on top of that have the function of desktop and portable DAC.
Its construction is mostly metal, slightly oval shape and most of the buttons found on the back I’ve seend also on A3 and frankly I liked those changes.

The manufacturer decided to give up on the E07K intuitive menu and this time opted for a simpler layout, with fewer buttons, thereby the product is simple and efficient. 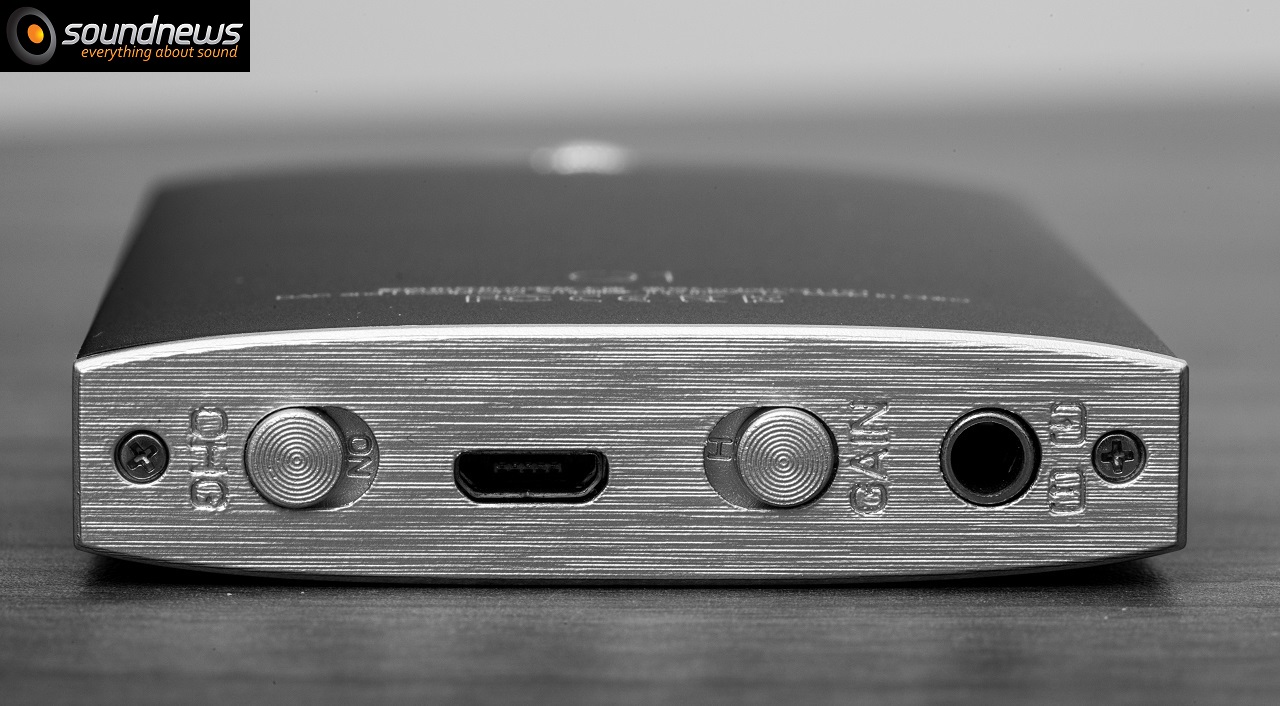 On the back there is the gain switch that can be set to low or high, depending on the sensitivity of headphones you own. The charging switch is also there with two positions, On or Off. And lastly on the back we find the 3.5mm analog input and a microUSB port which charges the device and connects to a PC to use it as a dedicated DAC.
On the front we find a bass switch with two positions – on or off, volume potentiometer and a 3.5mm analog output.
On the inside things are more interesting.

We find the already famous DAC chip – the PCM5102 DAC renowned for it’s excellent performance for the ultra-low energy consumption (efficient jitter elimination and low harmonic distortion) which is currently found in many popular devices such as Meridian Explorer, Arcam rPac, FiiO E10K, some Audio-GD products and in many other small devices.
The op-amp for the headphone amplification used is MAX97220 – a differential input headphone amplifier that eliminates the DC-blocking capacitors. Thus it can be used on very small PCBs also being stable on the THD numbers and power output. 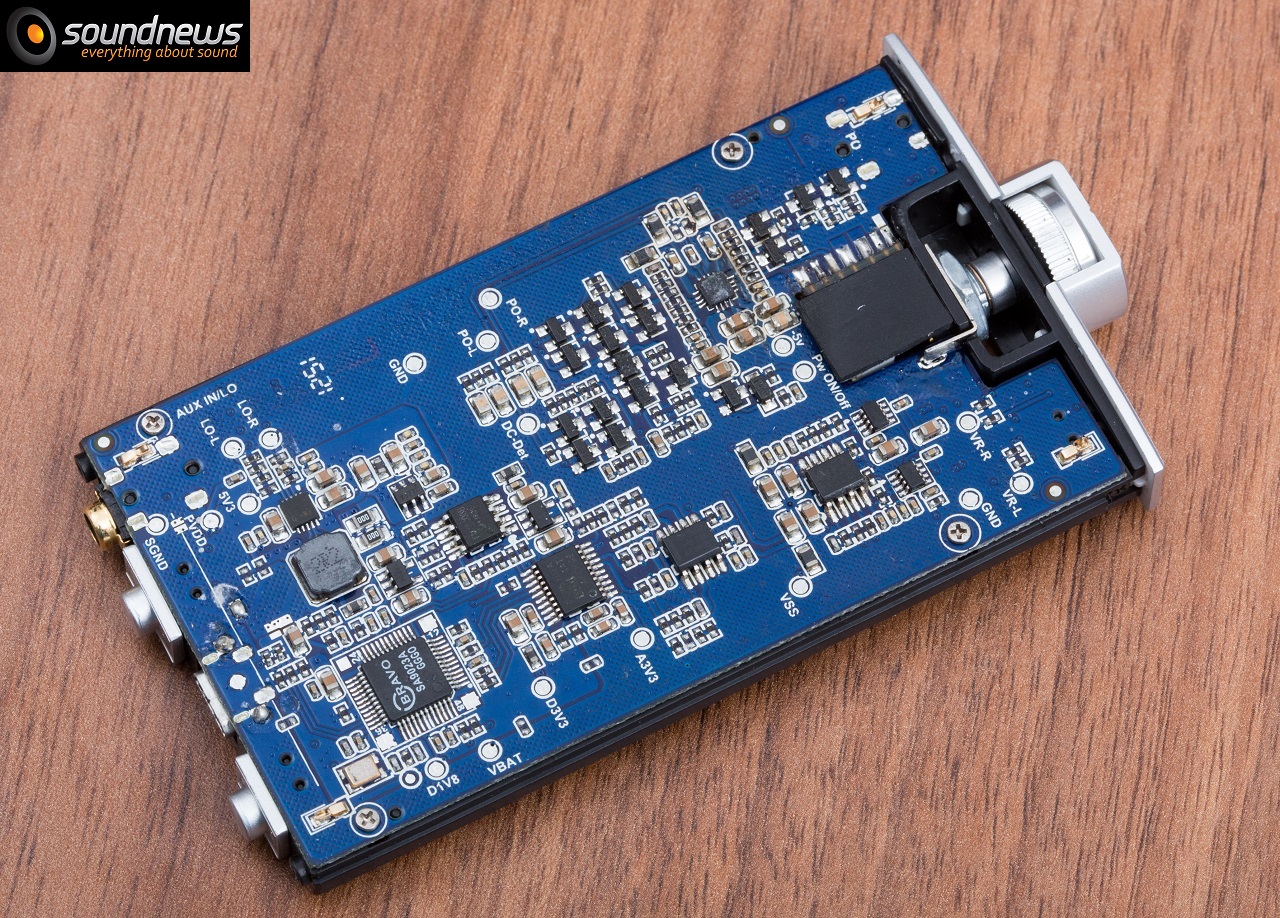 Volume pot is not an ALPS this time, but a little known model from TOCOS. Internal Li-Ion battery has a capacity of 1400 mA that in normal conditions means 30 hours of music playback.
Output impedance is only 0,3 Ohm – so it can be used with ultra sensible IEMs and with high impedance headphones with ease.
Power output is quite impressive having in mind it’s dimensions – 190 mW in 32 Ohms, maintaining a low THD of 0,005% (in the 1 kHz region) and a SNR of 107 dB.
Overall it’s a very compact DAC and headphone amp, having a dimension of only 97mm * 56mm * 13.1mm and weighting 100 gr, can be carried easily anywhere.
It can be used with a mobile phone as a portable headphone amp or with a dedicated DAP. In front of the PC it can be used as an external soundcard for some active speakers or for some performance headphones.

Let’s get to the interesting part, the sound. 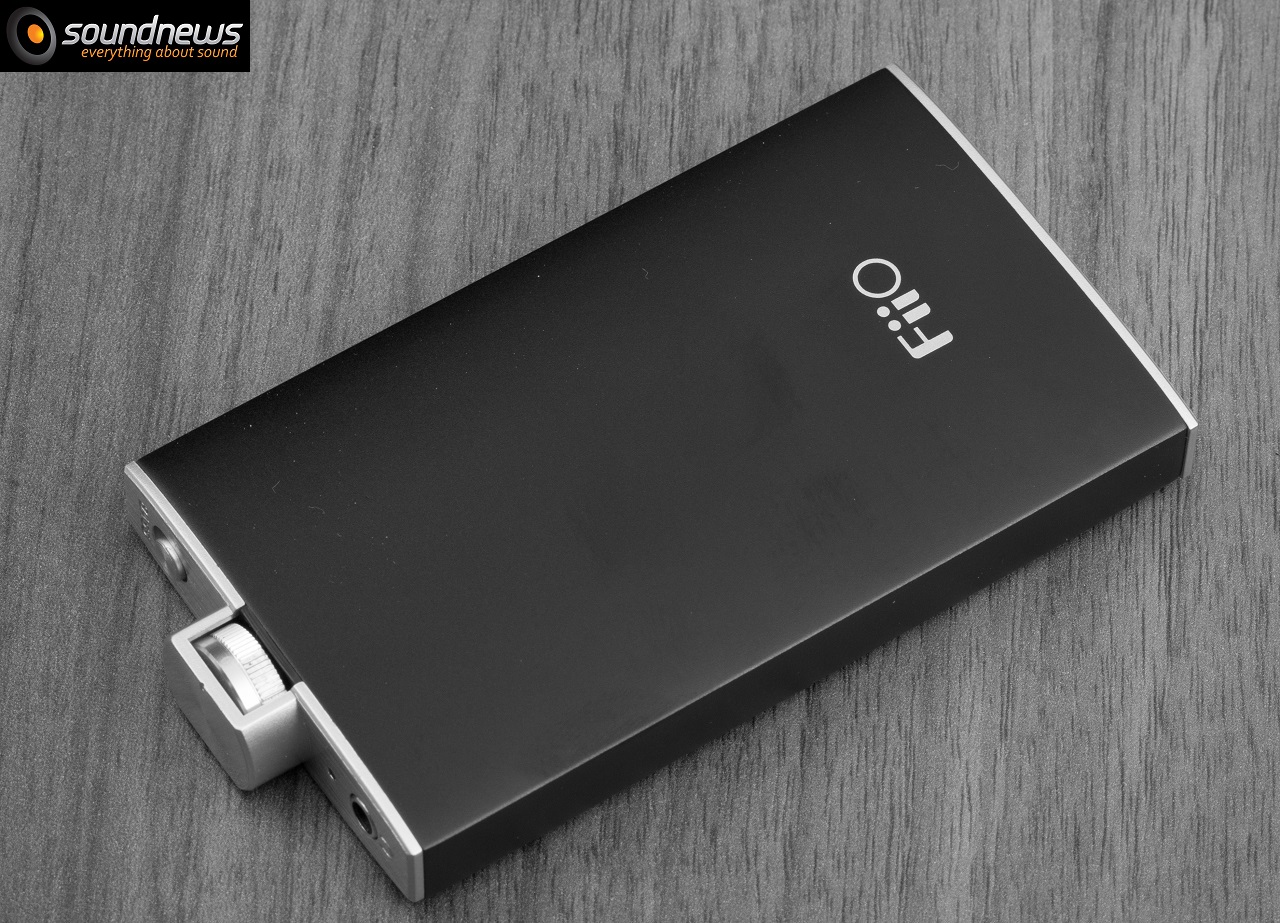 Sound footprint reminded me a lot about E10K and about X1 DAP.
As a whole the sound is natural, rounded, having a correct timbre, it sounds warm and non abrasive on highs. Mids are thrown on the first plan and the base is deep and authoritative.

Supreme detail and the large soundstage are not present, but overall the performance is pleasant to the ear and everything seems in place.

I will elaborate on all I have heard.
The base even set on Off was felt immediately. Listening to some local electronica (Silent Strike) I heard an authoritative bass, having a precise kick that goes really low. Sub bass was well played on Sennheiser Momentum M2 as well on AKG K545. Kick in the eardrum was so apparent that I had to lower slightly the volume to become comfortable again.
If I move the bass switch to On, I feel like I have a subwoofer behind my ears, exact bass gain is at around 5 dB – for sure it will be a nice feature for bass heads.
Letting it on On position I feel like base is flooding part of lower mids and even affects the cleanliness of highs. Put back on Off position, mids became clear again.
As a whole I think the bass and mids are the strong points of Q1 presentation, but I recommend leaving the switch on Off position.
Mids are sweet and pleasant to the ear, voices and string instruments sounded warm, well defined and placed on a forefront.
Listening to some classic rock such as Queen or Scorpions listening pleasure plunged up very fast. Voices, guitars tickled my ear in a pleasant way for several hours continuously, that is a good sign, especialy for me. 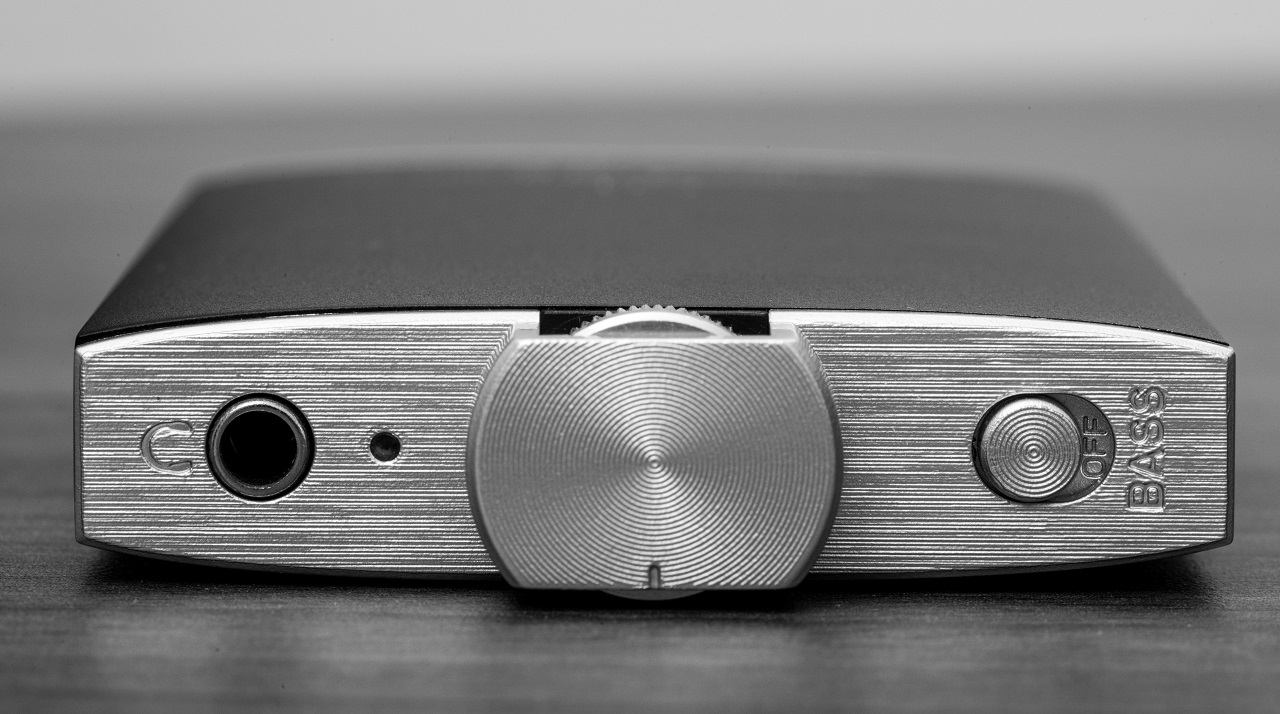 Although I liked the mids presentation, having volume and naturalness, the mids contour seemed weaker.

I felt the sound as a whole fruit, but peeled on the outside, I didn’t feel very clearly the start and the end of a note, contour being not very defined. Details retrieval is to blame that is nore very apparent on Q1, microdetails are not very outlined, macrodetails instead do not have such a problem.

Passing easy to highs using lots of modern jazz and classical music I felt like highs are rendered behind the rest of the instruments.
While not very detailed or precise, they were always pleasant without harshness, going one really well on any headphones and any music genre. I have liked a more precise microdetail retrieval on highs and a longer vibration of notes, but it’s not the case of Q1.

Overall it reminds me very much about E10K desktop DAC/Amp – that sounds as warm, natural, tonally cohesive, but slightly muddy on highs and imprecise on microdetails, having good transparency but not an excellent one.
Being situated in the entry level segment of FiiO it was somewhat normal to be like this, though it represents a big step forward comparing to any on-board soundcard I’ve tried.

I was overjoyed that I didn’t hear any hiss with IEMs and neither background noise was heard.
Power output is impressive, on some Sennheiser Momentum M2 as well on AKG K545 on low gain I cannot go more than 7 out of 10, it pains my ears. Probably it works well with demanding headphones as well, with high impedance, manufacturer recommends headphones up to 150 Ohm.
The little Q1 having a good macrodetail retrieval, but being dragged down by microdetails presentation, doesn’t get the maximum score for width and height of the soundstage. While it is not crowded, it’s not 3D sounding and it’s limits in size are always felt.

The impression is that I listen to a small concert room and not in open air.
The air between instruments doesn’t fly as free as I wished for, probably my ears are to blame, that are increasingly more pretentious.

Background is pretty black, sometimes where small pauses appear the silence is total, but on rare ocasions on crowded music background can became grey, slightly altered by the highs performance.

On 24 bit/96 kHz material dynamics are good and I do not hear some apparent flaws. Sudden change of music intensity is well heard and I feel that nothing is missing. On well recorded tracks, dynamics are high and they can change the mood of the listener according to the music played, that I think is extraordinary. 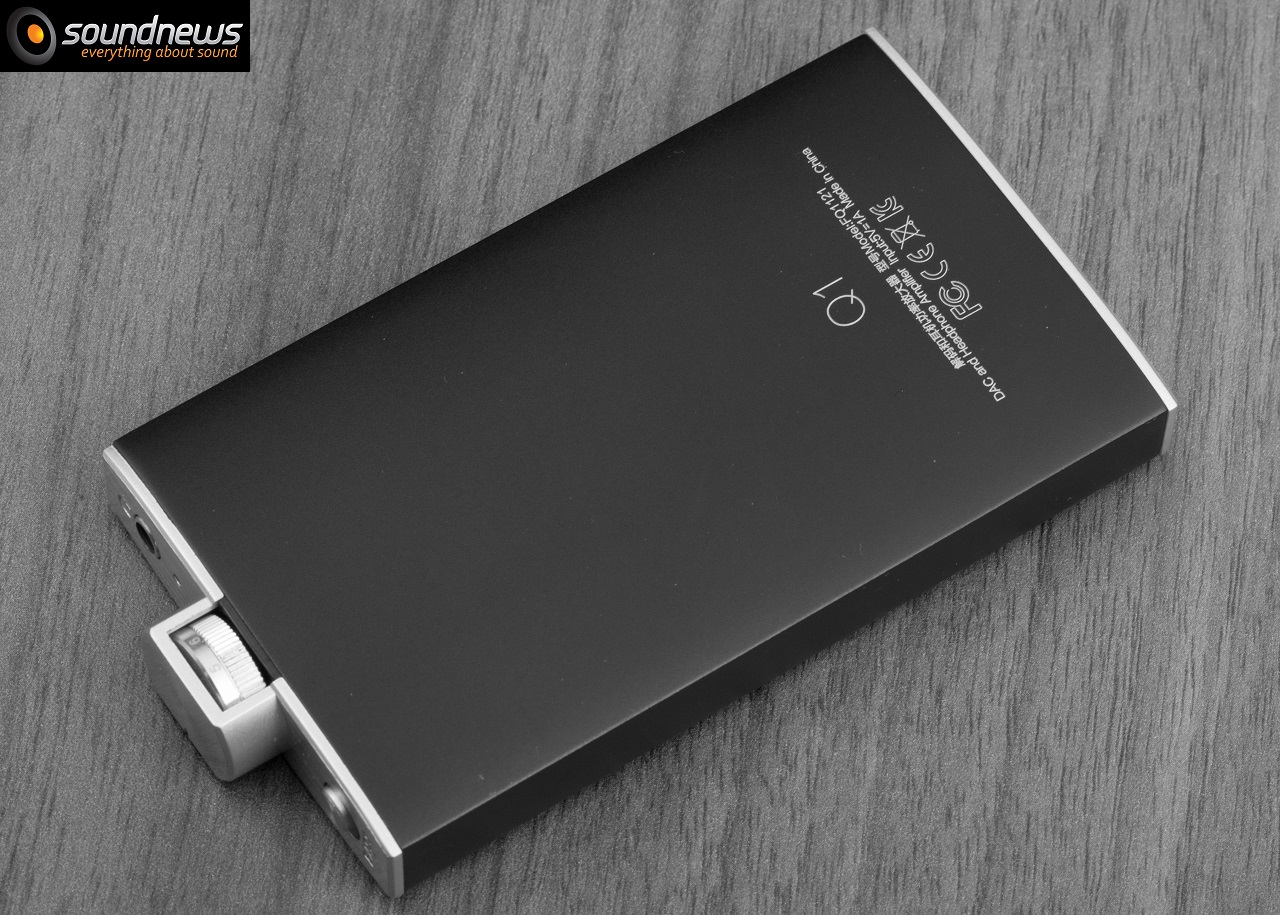 Many manufacturers do not tune at all their gear to sound good on 24bit material, and sometimes on 24bit music it sounds worse than on 16bit material.

It’s not the case for Q1 – I do not feel that distortion rises, botlleneck of dynamics, or apparent holes in frequency response, everything is at it’s place.

The device can the coupled with a PC even when it is charging, a good choice from the manufacturer.

I observed small changes to sound reproduction when the device is just turned on and it’s cold comparing to when it’s warm at touch and is runing for some time. When just turned on it sounds less analogic, digital glare is more obvious, bass does not go as deep, and mids do not have substance and are not full sounding. After 30 minutes of warming everything comes back, microdetails are more apparent, sound is becoming like a fluid and listening pleasure returns.

I left the best for the last.

Once the device is warm, I was mostly impressed by it’s kick in the eardrum on each and every note. Q1 sound very alive and fast, transients are kicking relentlessly , it’s impossible to not like something like this.

The sound became authoritative, having brute force, with a heavy but fast tone.

Listening for few hours to local folk rock, I started slightly to move and tap my toes, a sign that many albums will follow.

What can I say, even if it has some flaws, if you start to move your head and tap your toes in the rhythm of the music it seems that nothing matters anymore and music drug is having it’s effect already – I’m adding more music to the playlist. 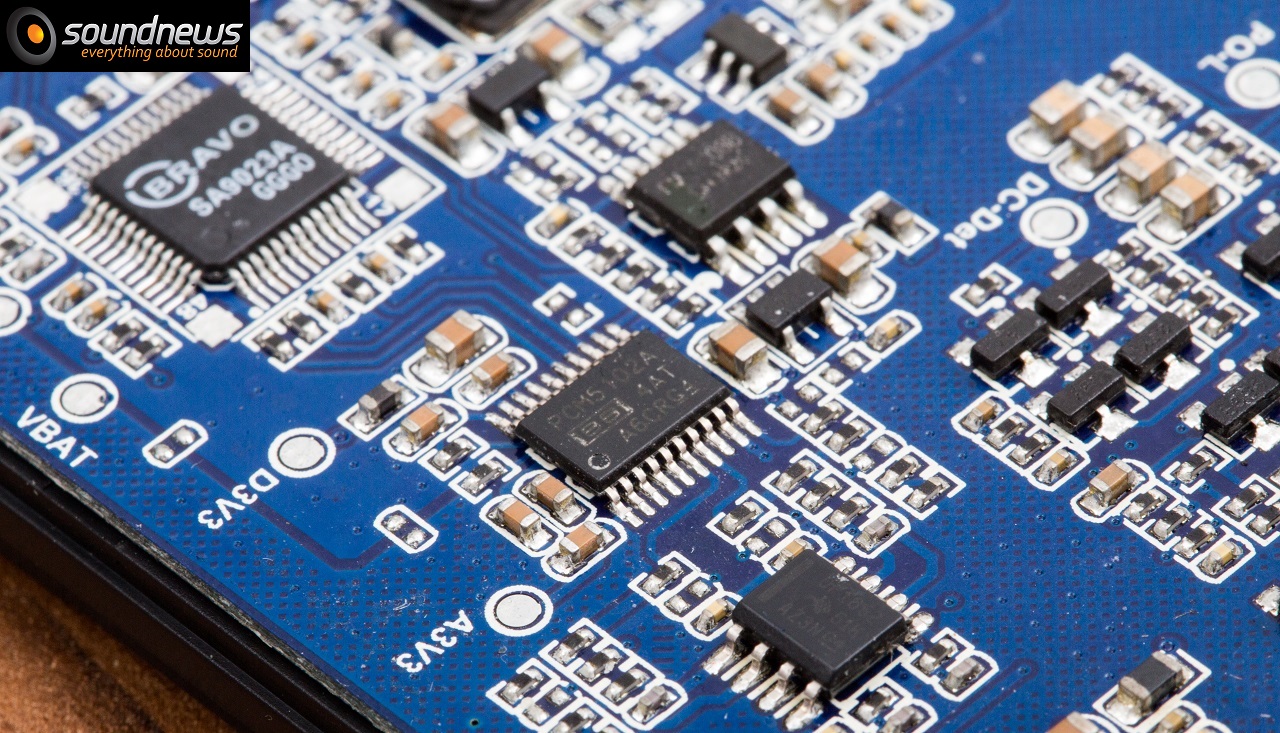 On my headphones Q1 sounded very good with each of them. On the sensible EX1 I didn’t hear hiss or background noise, and on M2 and K545 everything sounded dynamic, fast, lively, natural and pleasant.

The slight masking of microdetails and the limitations of stage size are not very apparent, only after a thorough listening it become more apparent.

I consider it on the same level with E10K, but let’s not forgot that having a battery inside it can be used as a portable headphone amp, E10K not having this feature.

It’s construction is solid, I’m already accustomed to this level of quality from FiiO.
FiiO reminds us that loyal clientele was not forgotten and Q1 proves this fact.
I find it as a decent upgrade comparing to the old E07K, and the price, dimmensions and weight were reduced.

Besides E10K I do not really see any competition in this price category.

E10K having an advantage on a more powerful headphone amp section, but Q1 offering portability instead.

Q1 is an entry level DAC/Amp that enters my list of recommendations and dethrones it’s little brothers E07 and E07K. 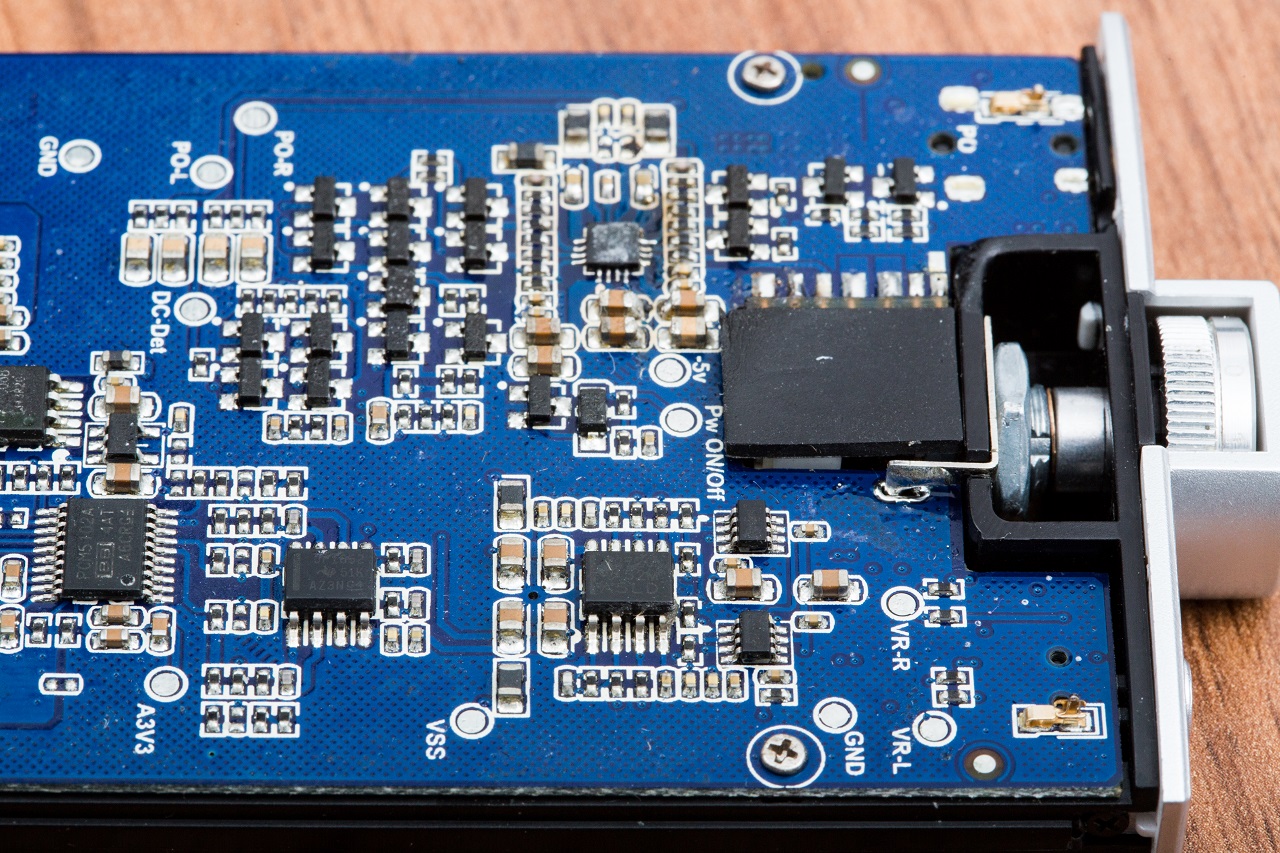 Pros:
– Good dynamics, kick and excellent sense of speed
– Fast and clean transients
– Warm, pleasant, natural sound
– Authoritative base and mids, both deep and well articulated
– Functions as a portable headphone amp as well as a combo DAC/Amp
– Excellent on sensible IEMs and on higher impedance headphones