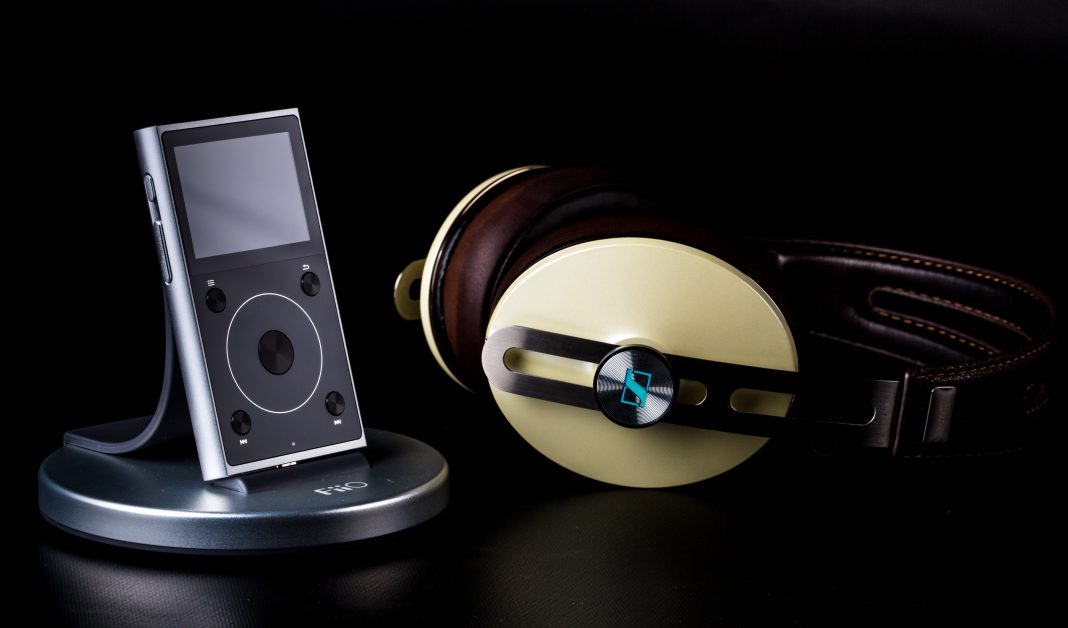 Dear audioholics, audio gear collectors and music lovers, I know I missed for quite some time now, major changes happened in my life, I didn’t listen to music for more than half a year now, my skills diminished, my pens dried out, but I promise than that more reviews will be posted from now on.

Recently at my door I courier appeared and dropped a package, it seems that FiiO wants to lift my mood at the beginning of the month, the DAP that started all the portable craziness – X1, was just updated to version 2.0, FiiO X1-II lives! 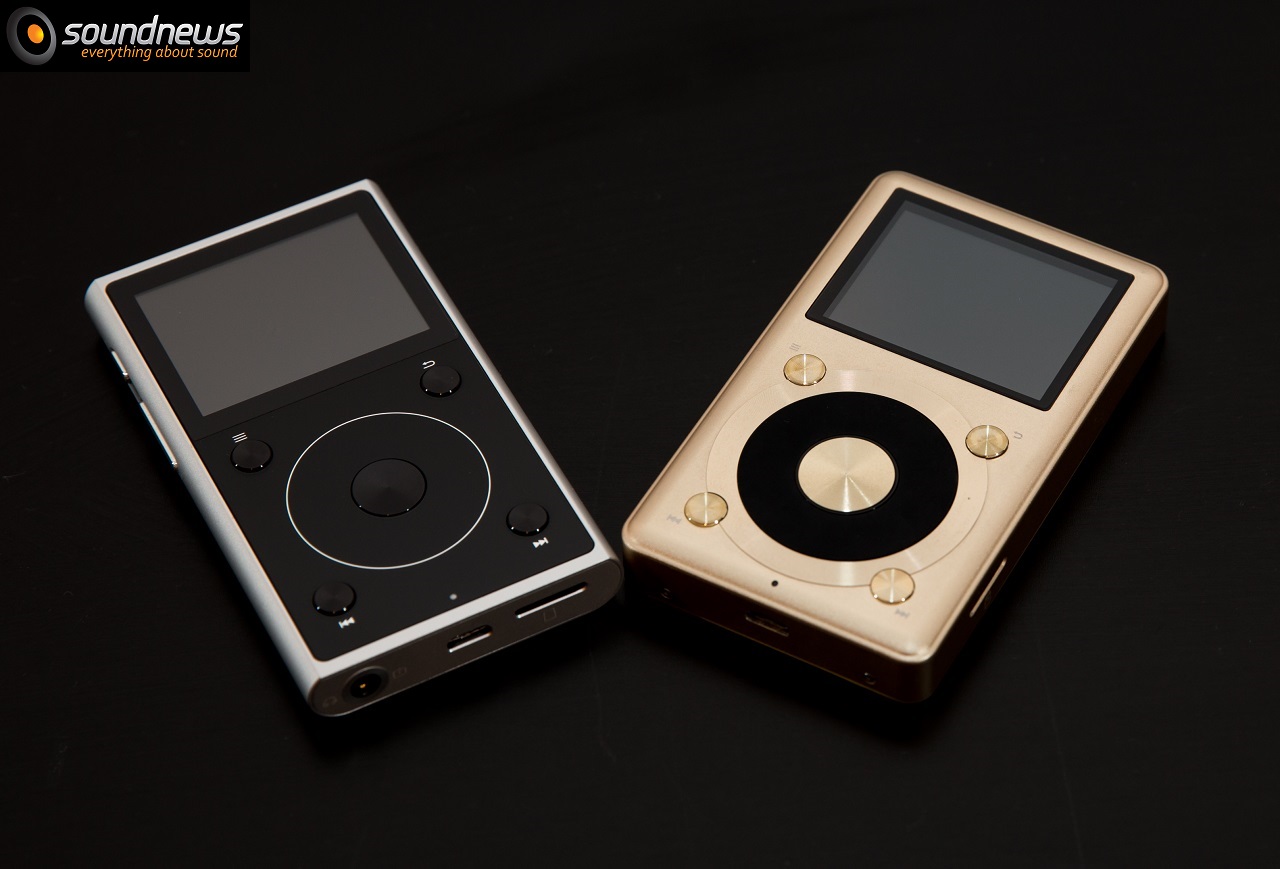 The initial feeling impressed me, the body is made entirely from aluminum, and the front is covered with glass. In the package there are some protective covers that will fully protect the entire front surface, not just the display.
The body has rounded edges that make it more comfortable to hold in hand. All the ports were moved down that make it feel more ergonomic and elegant.

A very good thing catches my eye: the scroll wheel is now touch sensitive! Mechanical wheel was abandoned, a very good idea in my opinion.
At my first generation X1 the scroll wheel in time became less and less responsive and needed a repair job, newest X1 will not have such issues. Don’t worry, Apple patent was not violated, FiiO uses something very similar feeling wise, yet very different technology wise.
It works precise; navigation is done easily and intuitive.

I tried using a Philips Bluetooth portable speaker and it was connected in an instant, in reality the work radius is about 5 m, but I have 2 thick walls behind them, the specified 10 m of radius can be achieved in an open space probably, without any obstacles in front of the signal.

This DAP used the newest generation on DAC chips from TI: PCM 5242 that according to specs supports 32 bit files, for amplification duties it uses the OPA2322 buffer and ISL28291 operational amplifier. 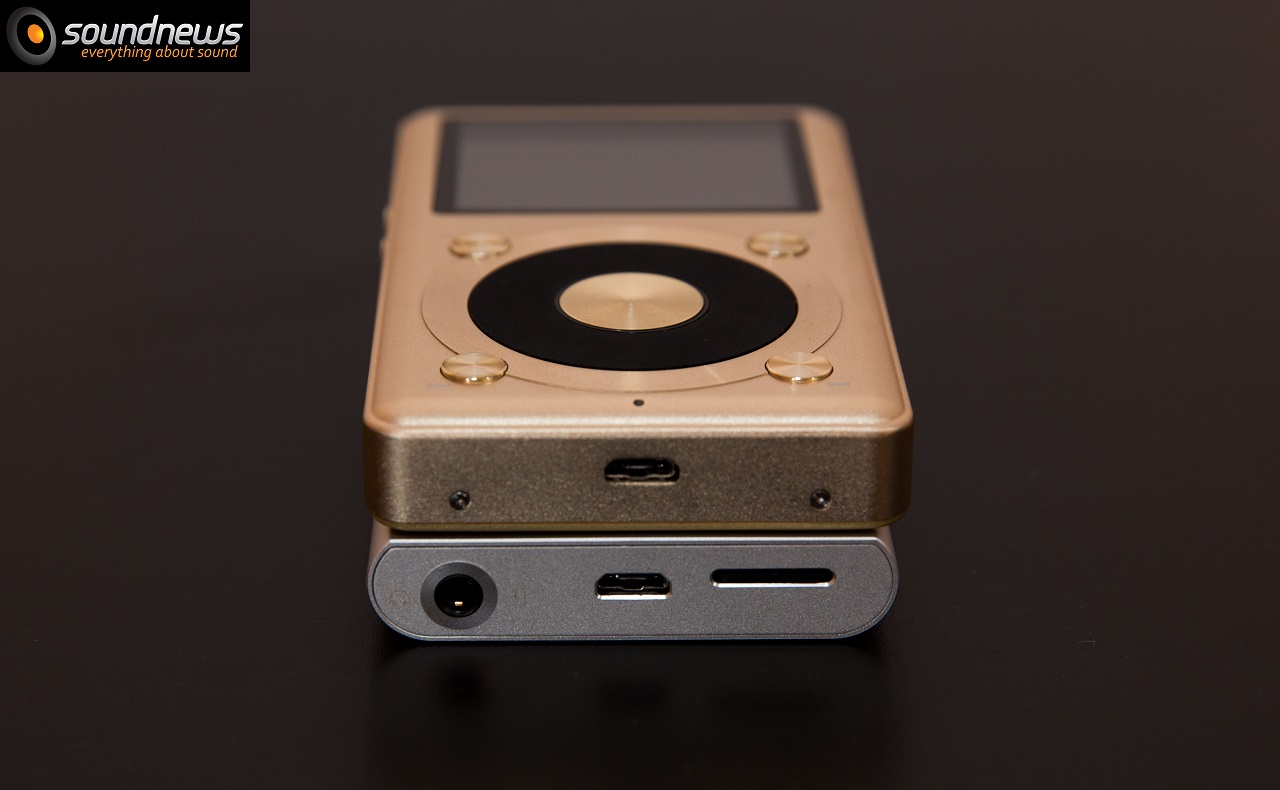 As you can see the specs are better than the first gen X1, SNR, crosstalk, dynamic range and FR improved a bit that is a welcome thing and a step into the right direction.
Dimensions remained almost the same; it’s a bit narrower and longer than the old X1.
As with first DAP, newer version doesn’t have an internal memory and uses only microSD cards, max supported capacity is 256 Gb, I am using a 128 Gb card and it works flawlessly.

It seems that contrast is slightly better, display uses an IPS panel of a small resolution but it doesn’t bother me much (240 x 320 pixels).
It seems that FiiO adopted some kind of sharpening technique on the newest X1, text and images are better outlined somehow and colors are more lively, more saturated, initially I thought that it has a higher resolution because of that, but it doesn’t.

An aspect that I liked less is the interface, it works but it’s kinda slow.
I’m blaming the stock firmware, it’s expected that in a future update to solve this issue completely. There is a slight lag when changing songs or the volume, on Hi-Res material it’s even worse. Once it completely froze and I needed to restart it, I feel that it’s OS is in an early stage and more work should be done in making it more fluid, quicker responding and more stable. 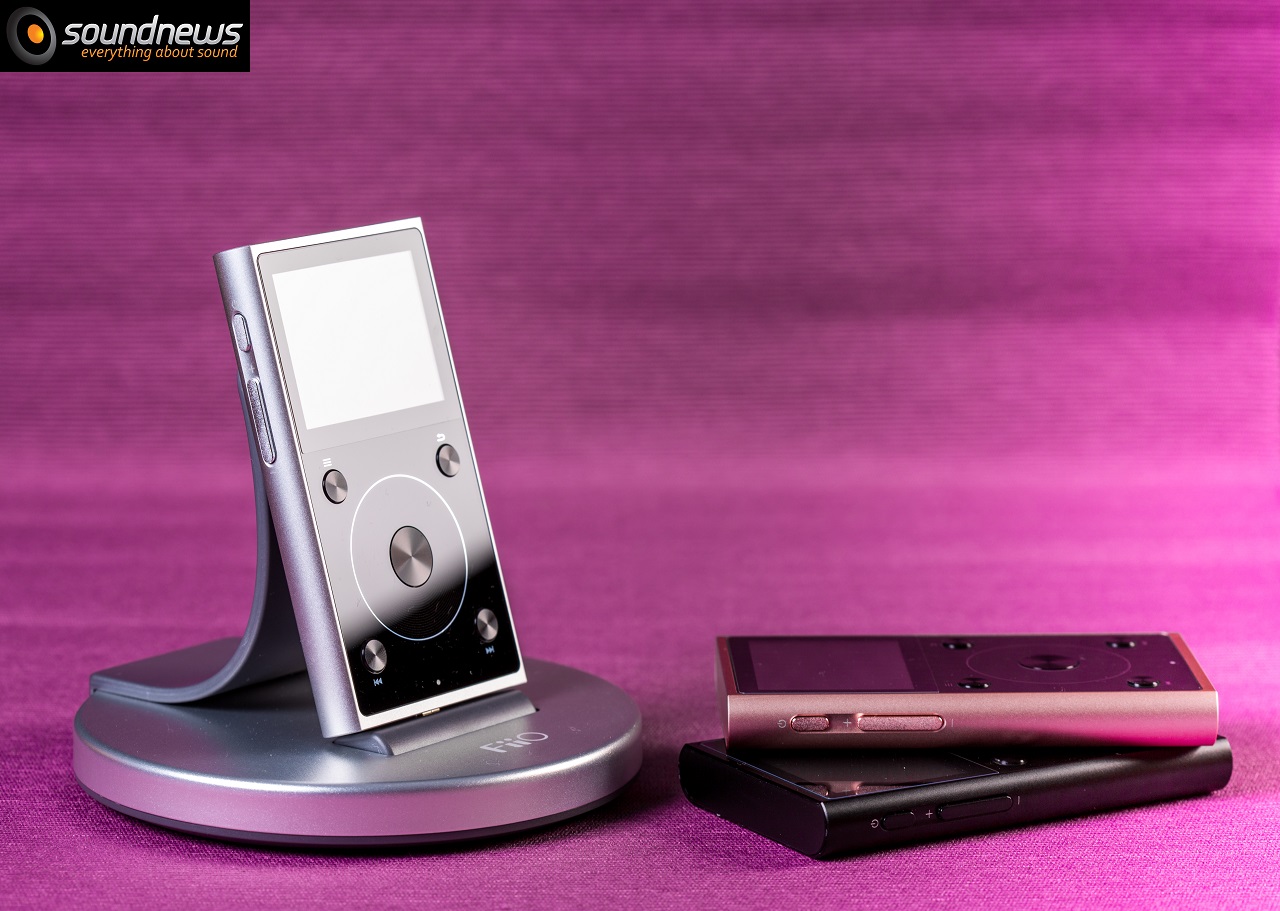 X1-II impressed me from the first song I played, the old sound character of first gen X1 remained the same, naturalness remained intact, fluidity of sound as well, I feel a better detail extraction on newest device as well as a wider sound on width.
A big step up for me is the high frequency reproduction, they seem airier and more present, but in an easy, non-bothersome way.

For my bass tests I try every time to focus on Geezer Butler bass guitar riffs, especially in his older albums, the man knows how to handle it that can be clearly heard on his older recordings.

On Iron Man by Black Sabbath, bass always gives me the creeps and even gives goose bumps on the right audio equipment. Using X1-II I’m glad to hear the same deep bass, full and voluptuous from the home gear.

First gen X1 was extraordinary on bass, it was extra strong in that regard and I was kind of worried that second gen would not be such awesome.
I’m gladly reporting that didn’t happen, I hear the same sound signature maybe even more stuff as well. 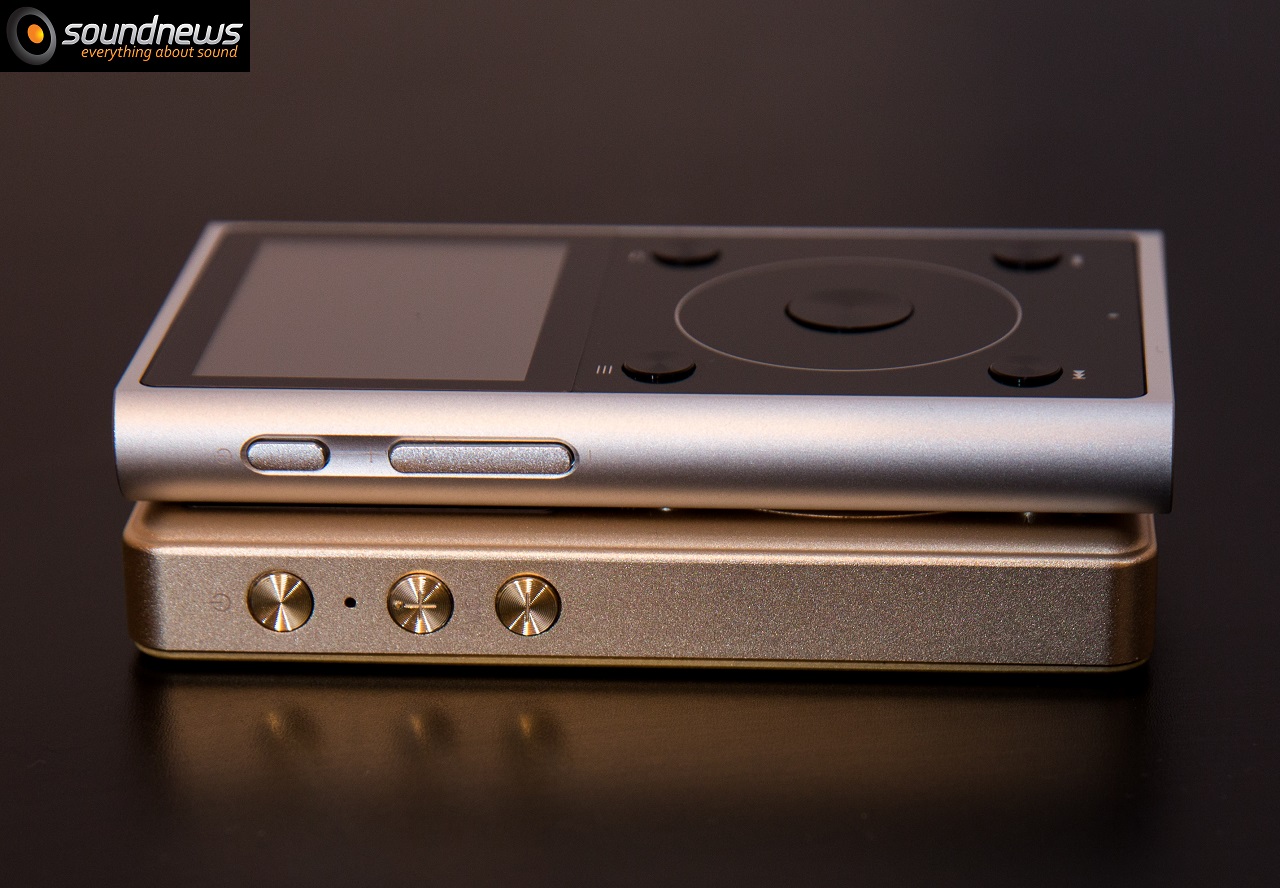 Another great bass test that a friend of mine recommended is the weird music of Noisia – Reptilians.
The album itself and the music in certainly not for me, but the BASS is from another world on this song! Besides the fact but this music seems to be created by the Protoss race from the StarCraft universe, certainly not by humans, the mix is incredible and original and plays well with my imaginations and with position (up/down) of the sounds.
The bass literally grabs you but a foot and smashes you to the ground on a good system. Big attention if you listen this at home on your speakers and subwoofer, watch your volume, it can blow woofers!

X1-II together with Meze 99 Classics have a great synergy on this song, bass is completely from another world, incredibly surgical in precision, fast and deep, goes low almost to infinite. This test is completely null for example on a weak bass system, so X1-II passes this test with flying colors.

Listening to a more crowded music where voices are played in many tonalities and lots of musical instruments are played at the same time, lots of percussion and improvisation: Epica – Consign to Oblivion – I was very curious if this DAP will pass the test of crowded music.

I was glad to hear piano as a separate entity from the band and gear positioning of voices in the center, having empty space between the rest of the musical notes. 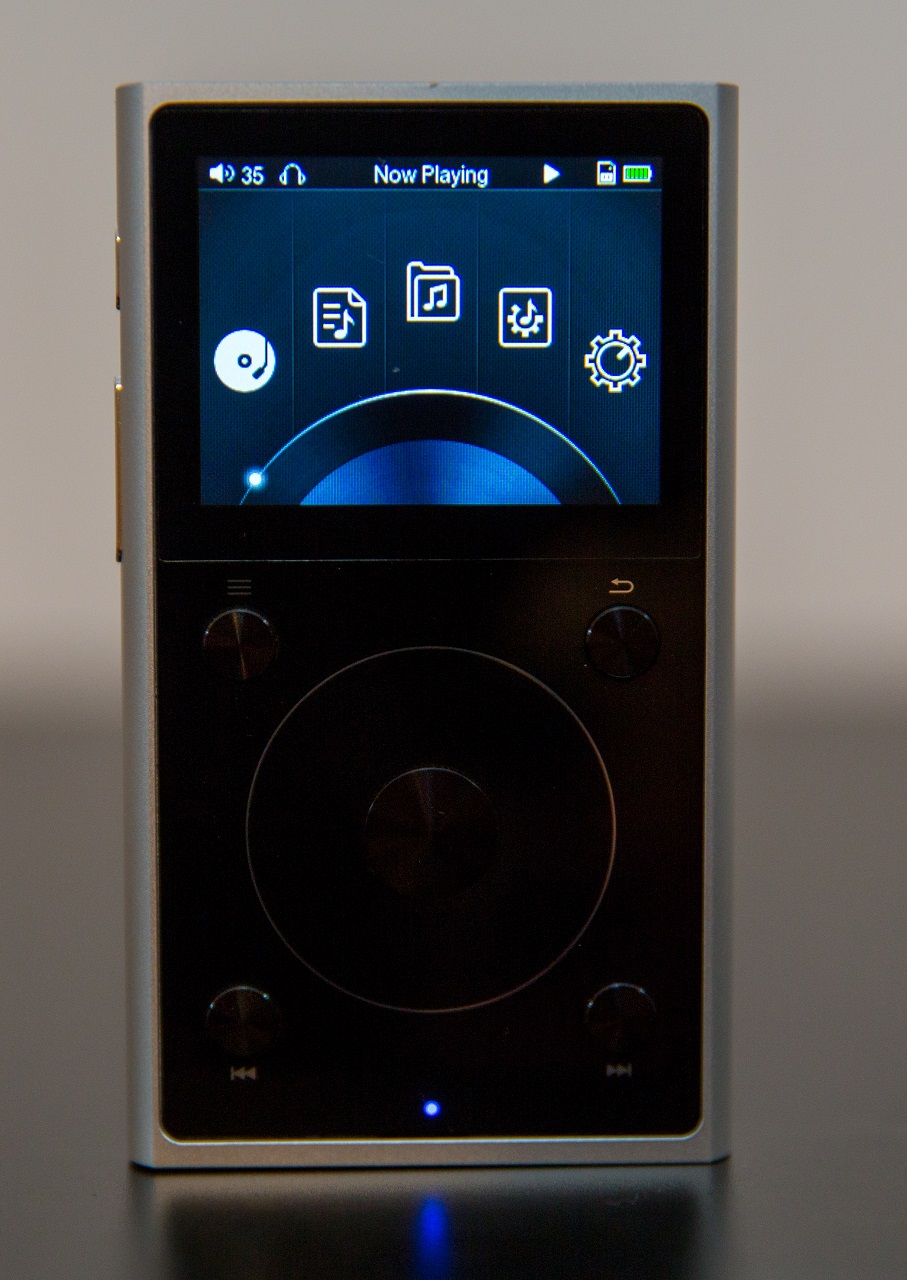 Trumpets and voices on different tonalities sounded just Epic, probably that’s why this band carries this name.
Congestion of music didn’t completely disappear but it didn’t annoy me as how ordinary mobile phones and ordinary DAPs do, where this kind of music in unlistenable.
Test of crowdedness I try to do mostly on fast paced music, where sounds appear and disappear really fast, on classical music I consider this test invalid.
This DAP passed the test quite well, but not exemplary, it didn’t bottleneck dynamics and it didn’t mix all FR into a mushiness of sound bloat.

Passing to the classic rock test where rock should sound “classic” – to everybody`s understanding some DAPs, DACs and sound cards sound as all the music played is fresh, lively, where even classic music sounds like club music, for dynamics and impact cravers this might be a good thing, but If I can’t relax on a classic masterpiece or on an old rock tune, it’s not good.

Listening to a best of signed by Led Zeppeling – Motheship I can confirm that the vintage character remained untouched.
Sound is kinda relaxed but dynamic in the same time, If I slightly shake my head and my feet start to tap, the test was passed.
I had the same feeling on Phoenix – Mica Tiganiada/Fata Verde/In Umbra Marelui Urs – good dynamics, rhytm, tonality and some good vintage qualities as fluidity, warmness and sligt rounding of the notes.

It’s clear to me that this DAP doesn’t use any oversharpness filter – a false effect that oversharps the notes, thins the voices and overdones drums and cymbals (an effect frequently heard on low quality sources such as mobile phones that want to sound hign-end). 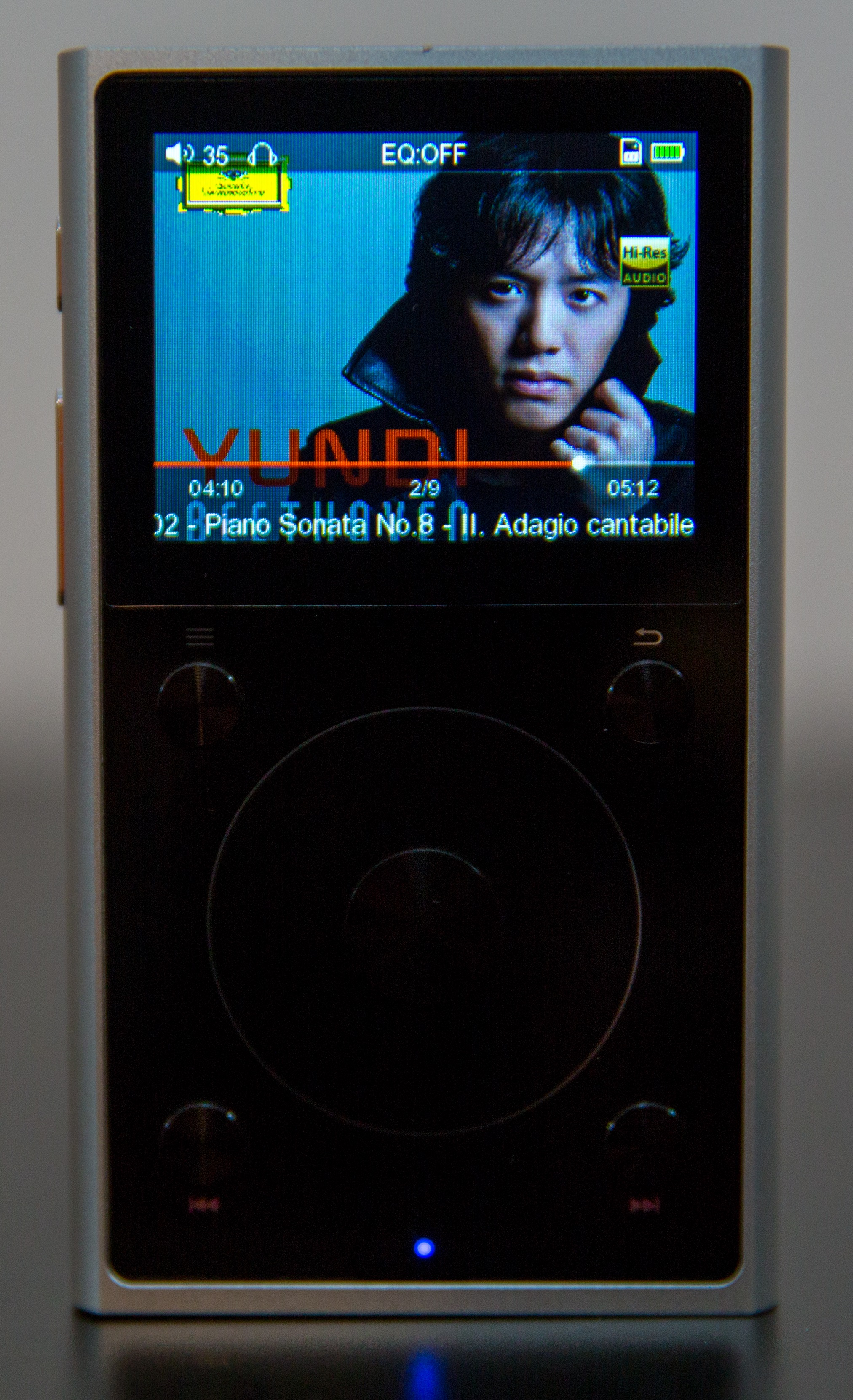 To test out the depth of the stage and positioning of notes in a 3D field I used some Pink Martini – I like all their albums, so I selected 2-3 songs from every album.
On Je Ne T’aime Plus I was curious if the width of the stage and the angle from which the sounds are coming from is large or narrow.

Those levels and sublevels of sounds, that need to reach me one after another – I don’t quite hear them. Everything happens more like in a 2D field than in a 3D world.
I can easily distinguish the positioning of notes but the distance between me and the sounds is everytime the same.

I think I’m asking too much from an entry-level device.
From this point of view first gen X1 sound even more stifled and even flatter, as a sheet of paper.

Imaginary stage seems pretty wide, but as well it’s not very tall or deep.
Listening to Pana Cand Nu Te Iubeam by Pink Martini I felt that the voice flew far away but it would hit an imaginary wall very fast, normaly it should subtly dissapear in a void space as it happens on a better gear. 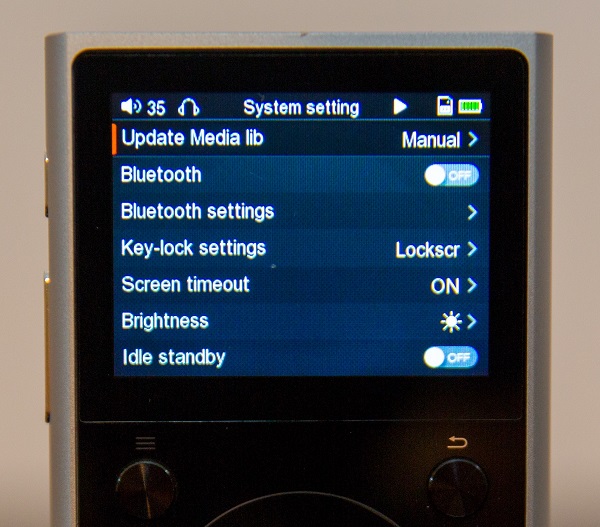 There is something that is really a big upgrade compared to first gen X1 – high frequency reproduction, it’s really good in this area.

The same thing cannot be said about first gen X1, or even about X3-II.
X1-II doesn’t hide high freqs, it plays them in a non bothering way. For example using Sennheiser Momentum 2.0 or Meze 99 Classics I didn’t wrinkle my face not even once on heavy percussion and drum solos.
The feeling of grainy sounds that first gen X1 had almost dissapeared, a higher level of detail retrieval is easily perceptible on second gen X1 as a fresh air from an open window.
The slight mudiness from X1 dissapeared as well, I think it’s due to newest generation of DAC chips, but maybe FiiO did some tricks as well using some DSP of some sort.
Certain is that hidden notes are now easily heard, grain or high freqs on second plan are not anymore, the sound is more real now and faster somehow.

X1-II is impressive from the first touch. It’s construction is solid, specs seem to be a step forward.
More work should be done towards a faster and more stable interface, at this moment (FW 1.2) it is pretty laggy and seems not finished, on Hi-Res material is even worse.
Nevertheless I again consider it the biggest bargain by FiiO at this time, it’s compact, easy, intuitive, plays a wide range of lossless formats and all of them sound at least good.
The tone and soul of music is present, music has a contrast and sound as a live interpretation.
The DAP will be sold approximately at 100 Euros at some local shops. 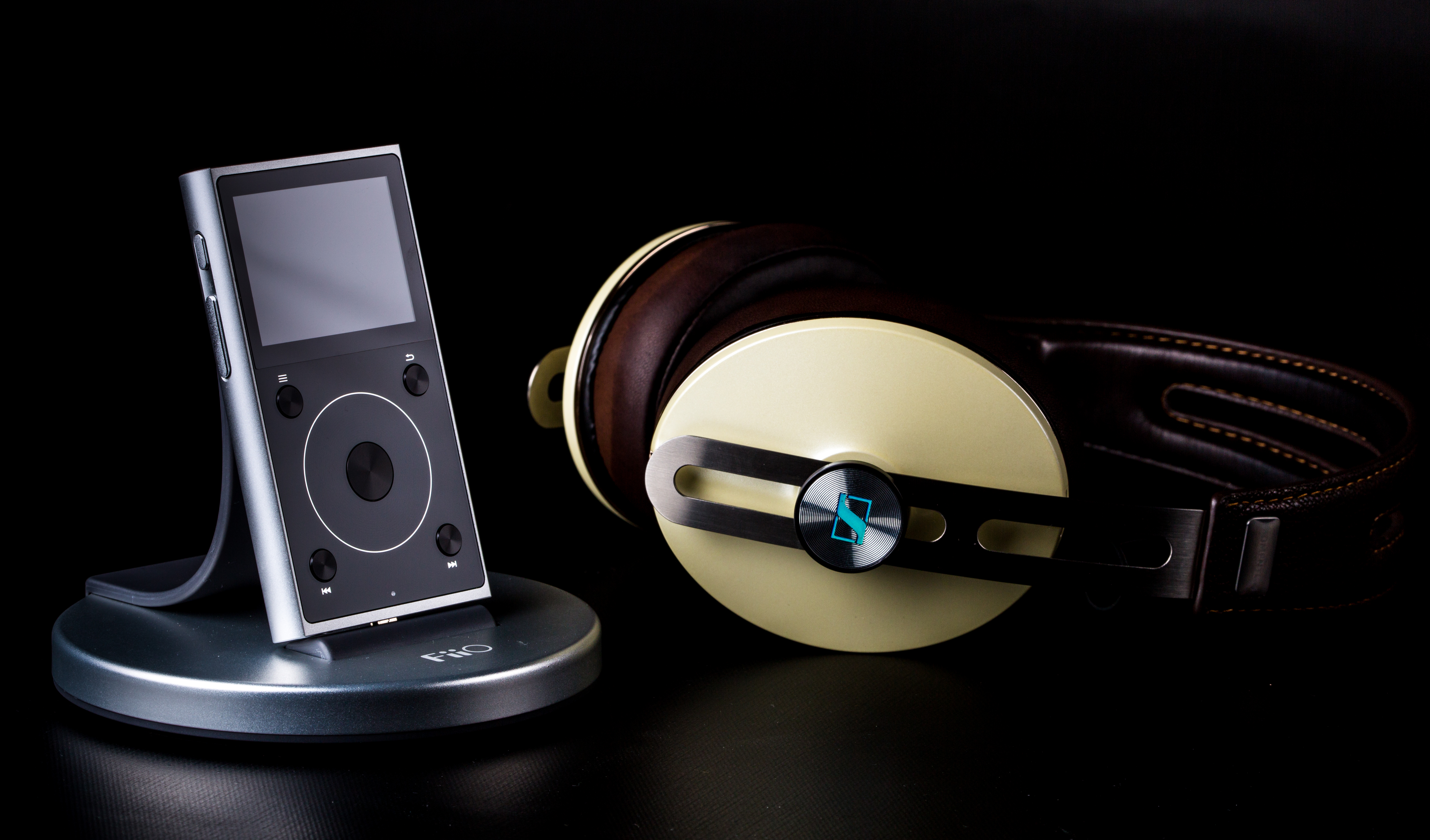 Cons:
– Interface is slow, stuttering here and there
– Bluetooth radius limited a bit
– Limited power for power hungry headphones (a portable amp is a must for this purpose)