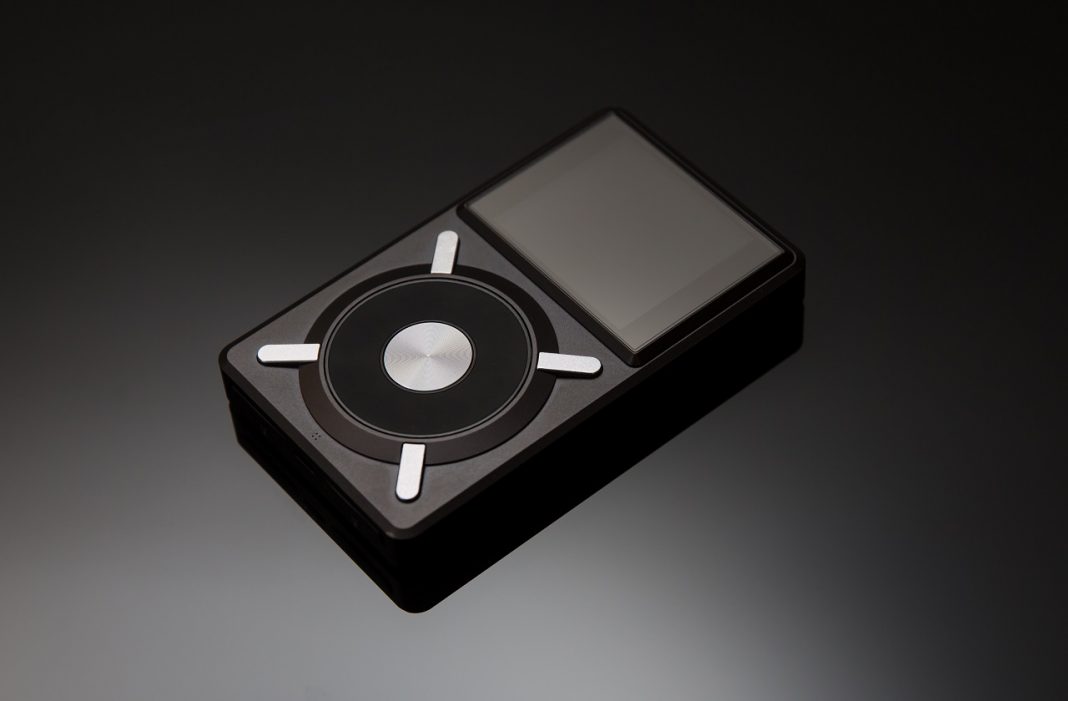 After a long period of waiting, finally FiiO X5 sees the light of the day and it is being presented for the first time in Las Vegas at CES 2014. Received feedback was excellent and the next step was launch in limited quantities to the Chinese market at the beginning of this year. For a worldwide launch the company decides to wait a bit for a reaction from internal market for the desire to further improve and refine it’s software and resolve some of it’s bugs. The unit tested by me has the first FW version and it is very likely that the units that will be sold will be better optimized and even sound better.

Approximately one month I have been playing with the new X5 and I’m still comparing it with X3 and with anything I could find around.

Even from the first contact with the player you realize that it is made entirely from the scratch as against X3. It’s construction is superlative and practically I have nothing to reproach. It is made entirely from metal, only the menu wheel has a rubber exterior. The display is far better than that found in X3. It’s dimensions increased significantly, it’s more massive and weightier, this is the only price paid for a better quality. 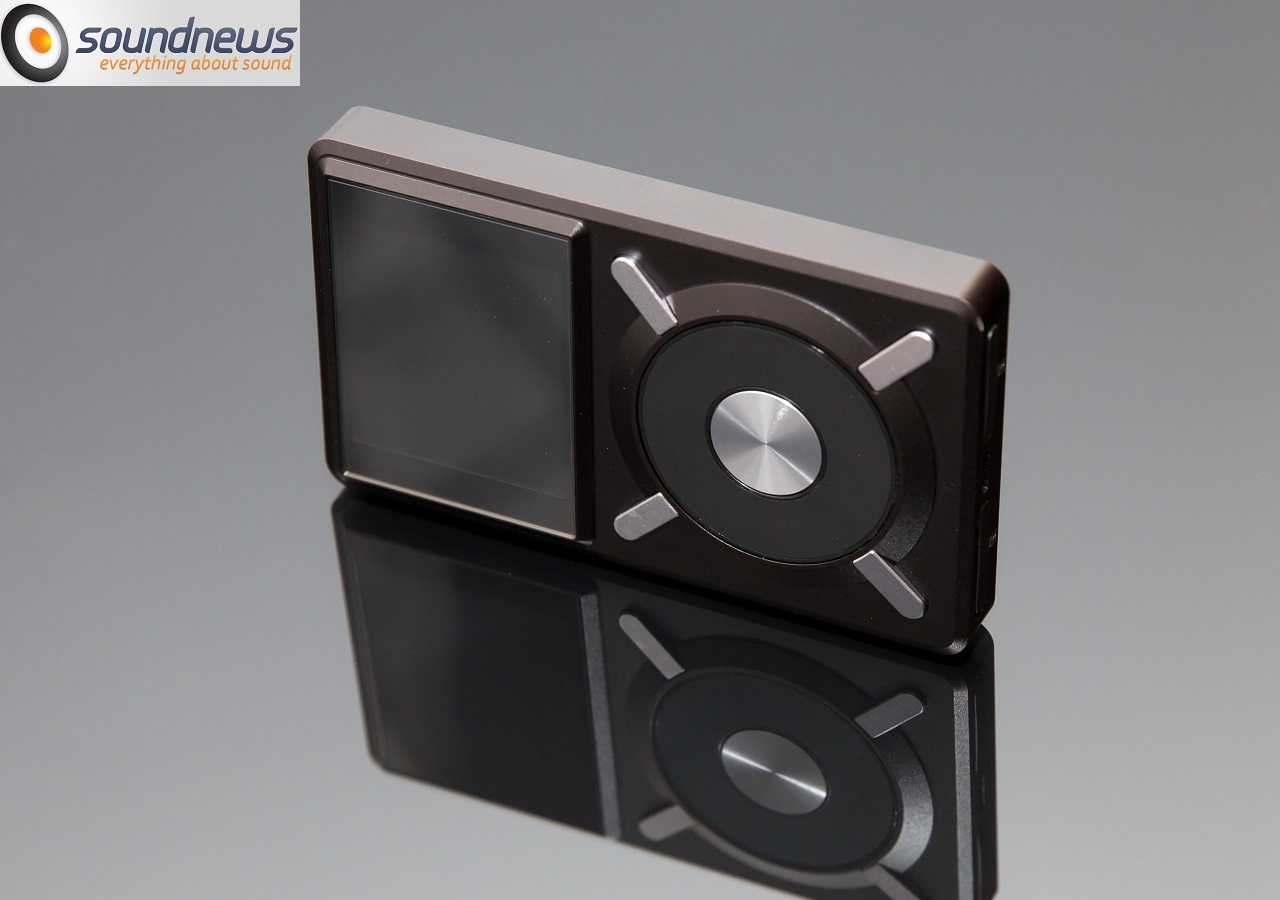 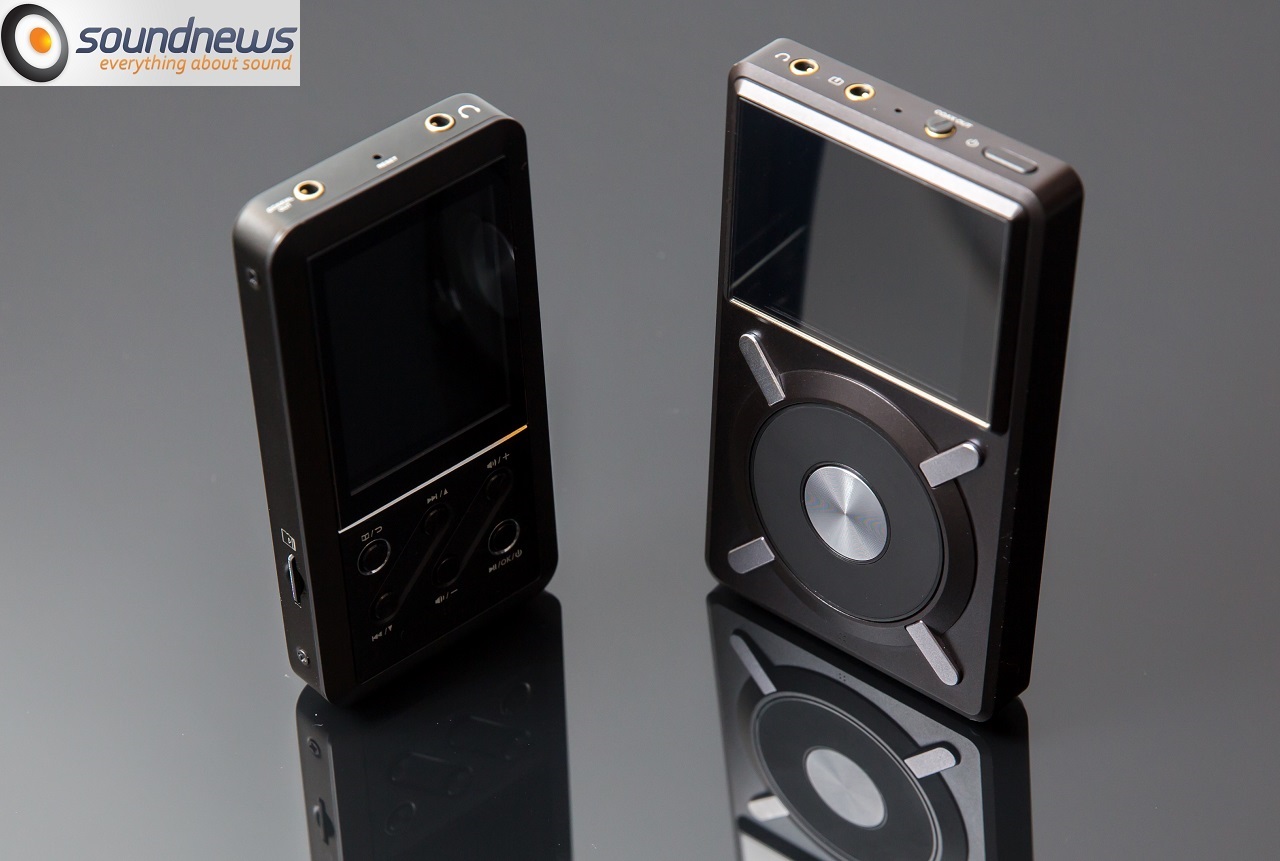 FiiO engineers were seriously in a hot pursuit, a lot of effort was put into menu and software implementation, this can be seen in faster response time and easier to navigate menu compared to X3.

Device itself is an all-in-one, it’s a high performance DAC that can be connected to a PC/Mac, a high resolution player that knows to decode PCM signal up to 24bit 192Khz and even DSD (in a future firmware update), it’s also a potent headphone amplifier and a digital transport (coaxial out) to a better, higher performance DAC (for ex. for Chord Hugo).

Besides headphone out, there is also a line-out for using other external headphone amps, or to connect the player directly to a stereo amplifier. It should be noted that X5 doesn’t have it’s own memory , that is why it has two micro SDXC slots. The player supports newer generation of micro SDXC cards, so you can have a totally of 256 Gb of PCM/DSD music. In the future, when bigger capacity cards will be available it could reach the mind blowing 512 Gb of memory capacity. 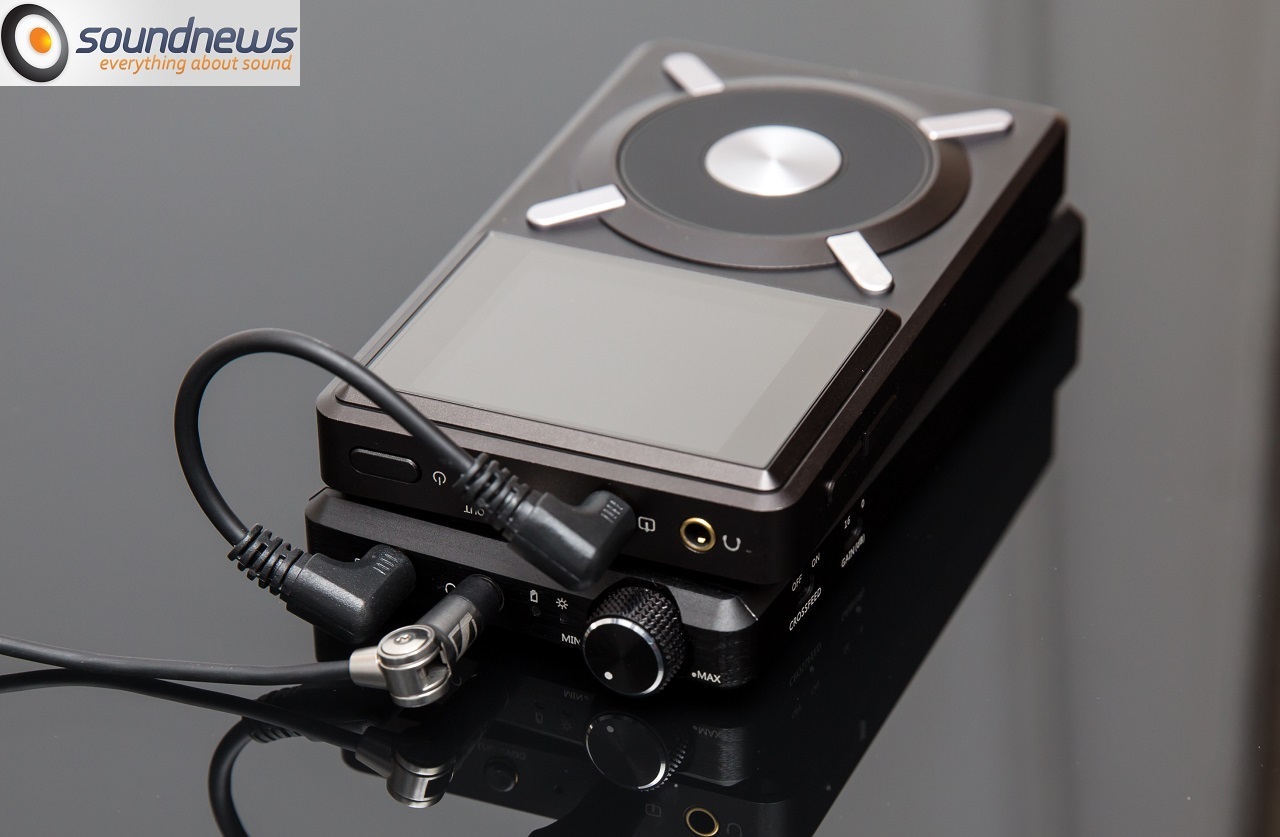 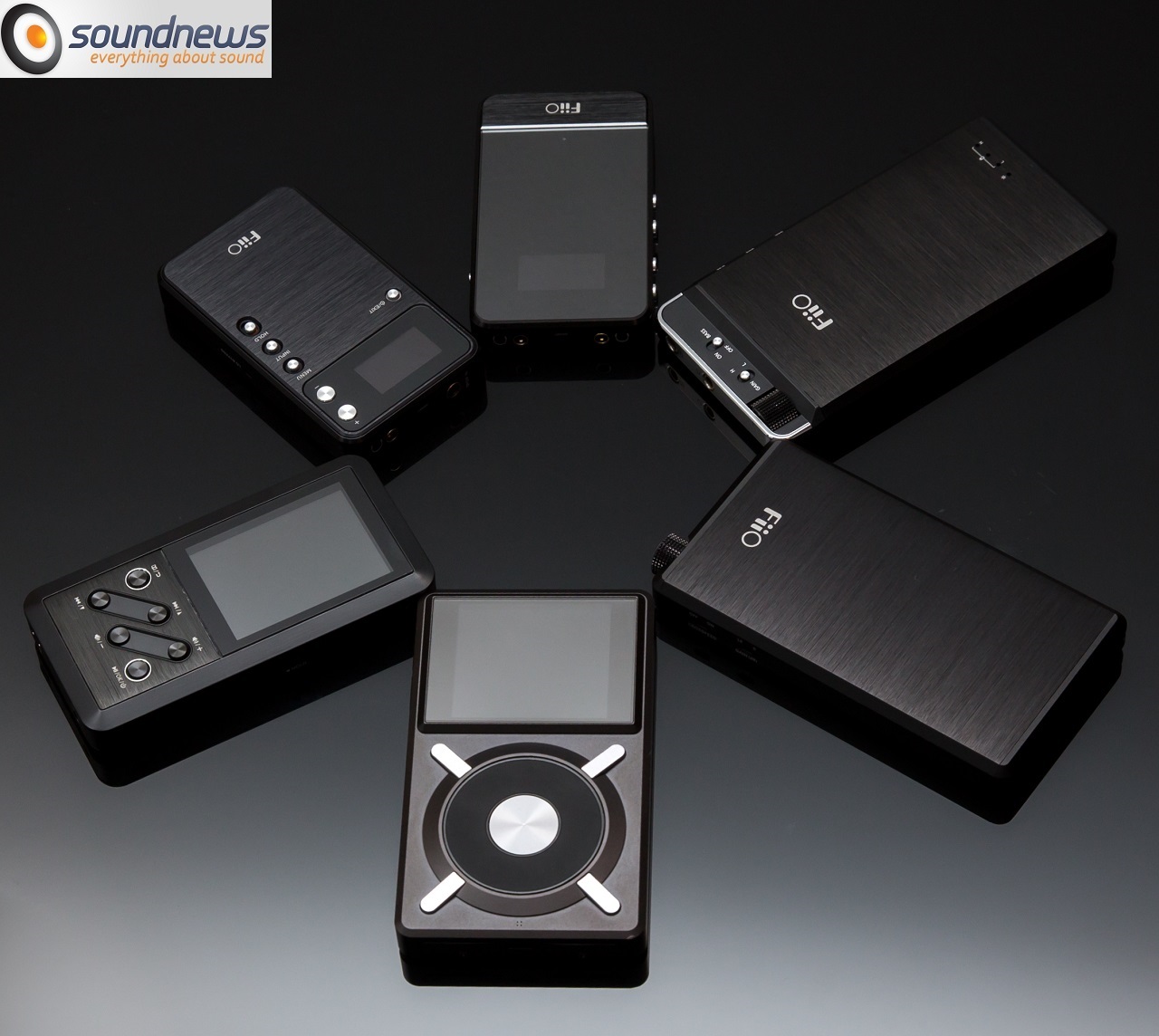 This time the menu is faster, we can select the desired gain, browse by artist, by playlist or by folder (I used this one). You can do your own playlist with favorite tunes, there is a built in EQ, there is also a custom one, I leaved it at normal, this way I like it best. For those who are not purists EQ is a pleasure to use with its 10 band EQ, it’s quite complex for a portable device.

Menu wheel is receptive, but sometimes not very precise and the buttons around it form the X letter (forward, backward, back to menu, favorites/shuffle button).

Regarding it’s design, FiiO was inspired by DJ decks, personally I think it’s a cool design, I hoped for a touch based menu wheel (as iPod classic have), but that one is an Apple patent, not gonna happen on other non-Apple devices.

Ok, let’s get to the most important thing. 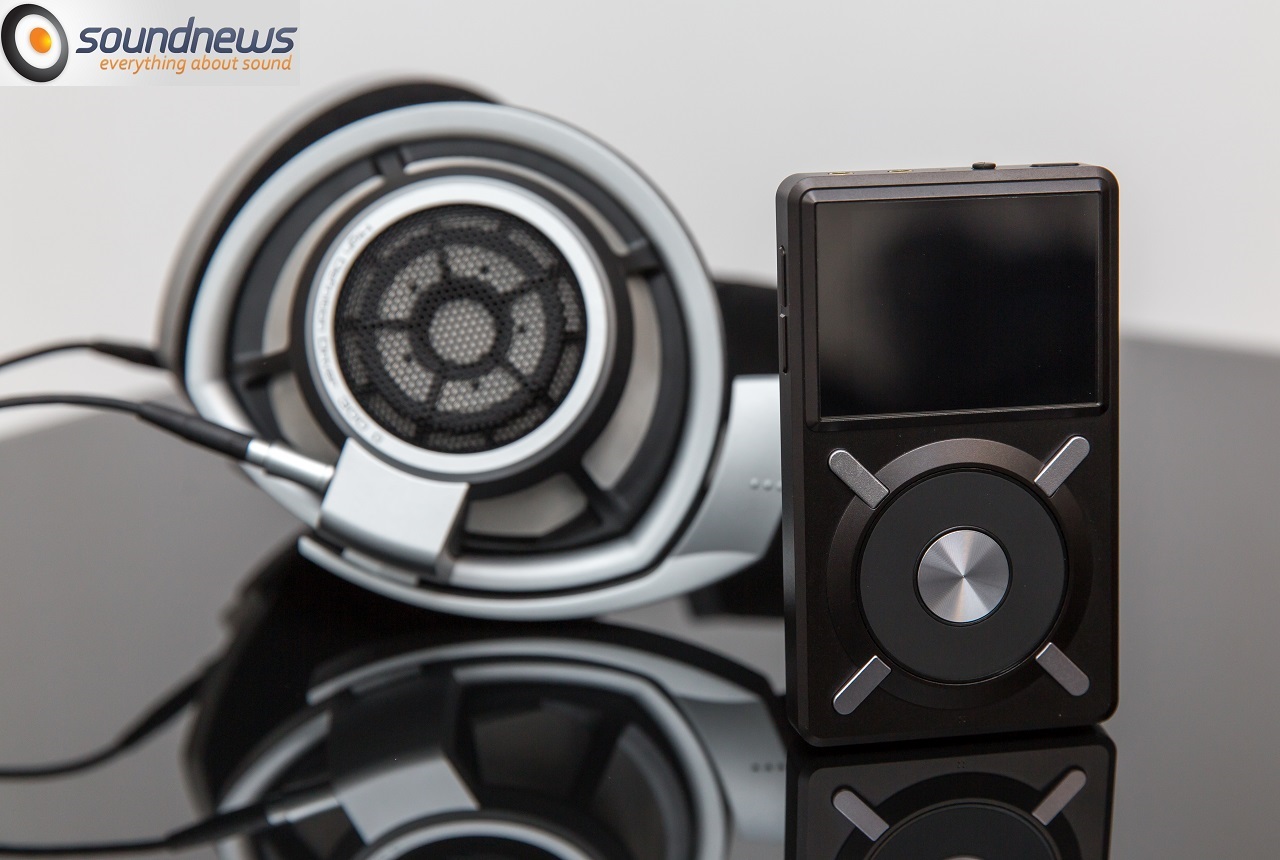 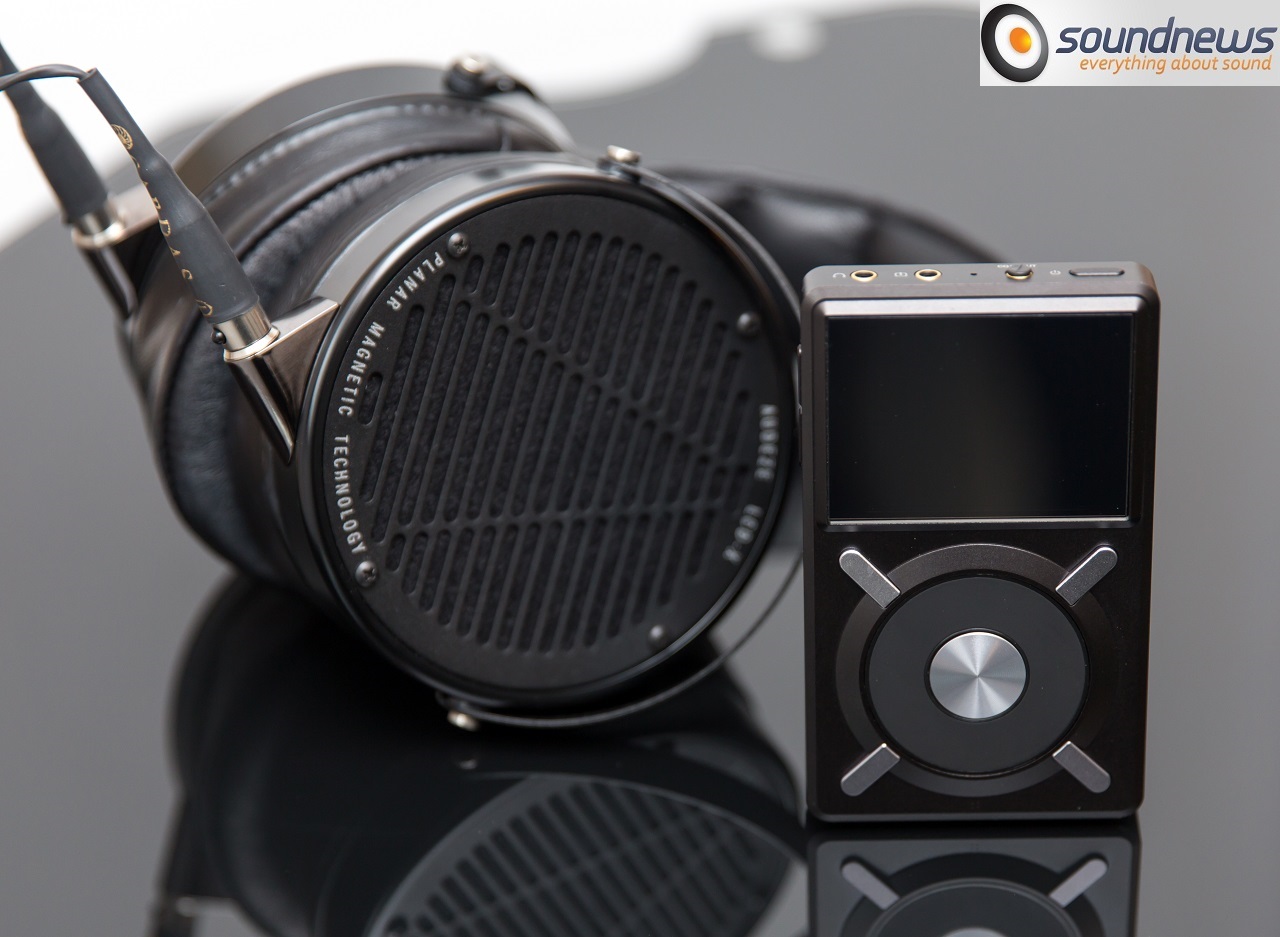 When I heard X5 for the first time it was a magical moment, knowing very good what FiiO had done till this moment I had my expectations, but truth do be told they were surpassed.

I declare, without any hesitation,  there is no doubt, X5 is the best product that FiiO has ever made. X5 sounds better that any other DAC they made until now (including E17, E18) and much better sounding than X3. I will try to describe as detailed as I can my impressions.

At majority of FiiO reviews that I have done at the end of the article I would put at cons the lack of details/resolution and of air between musical notes – those small details separated FiiO devices from other more expensive devices. Well, dear audiophiles, X5 is everything I wanted and maybe even more.

When I listened to favorite tunes of Gothart, that are pretty complex, with a lot of voices and instruments I heard a sound that I am hearing mostly from expensive or very expensive equipment.

I have obtained a complete 3D stage, stereo image was very well defined, I was hearing accurately from where every sound is coming from. The sound became holographic and alive, a thing that you never hear from a 200 gr device. The size of the stage it’s a lot larger than that found in X3 or E17.

Apart from it’s large soundscape I heard a lot of air between instruments, that pause between notes, that void space that makes you taste from the favorite voice or instrument, and you make it with such an ease that I wonder every  time how they did it. I have a lot of tunes in which in some parts of the song I like a single instrument, even if 4 or 5 other instrument are played in the same time, with X5 is so easy to focus on that instrument. When I’m listening to X3 I can easily talk to someone without a problem, but with X5 when I press Play I just fall silent, the sound just steals my attention.

X5 sounds natural and easy on the ear, it is totally ear fatigue free, you can listen to it for hours without any problem.

With exception of E18, the rest of FiiO DACs sound pretty dark and/or overly warm, the sound being focused mainly on bass and mids, but high frequencies being washed out and put on the second plan. X5 is completely different than that, it sounds balanced, detailed, natural, very alive and not a single frequency stands out, everything is in it’s place. 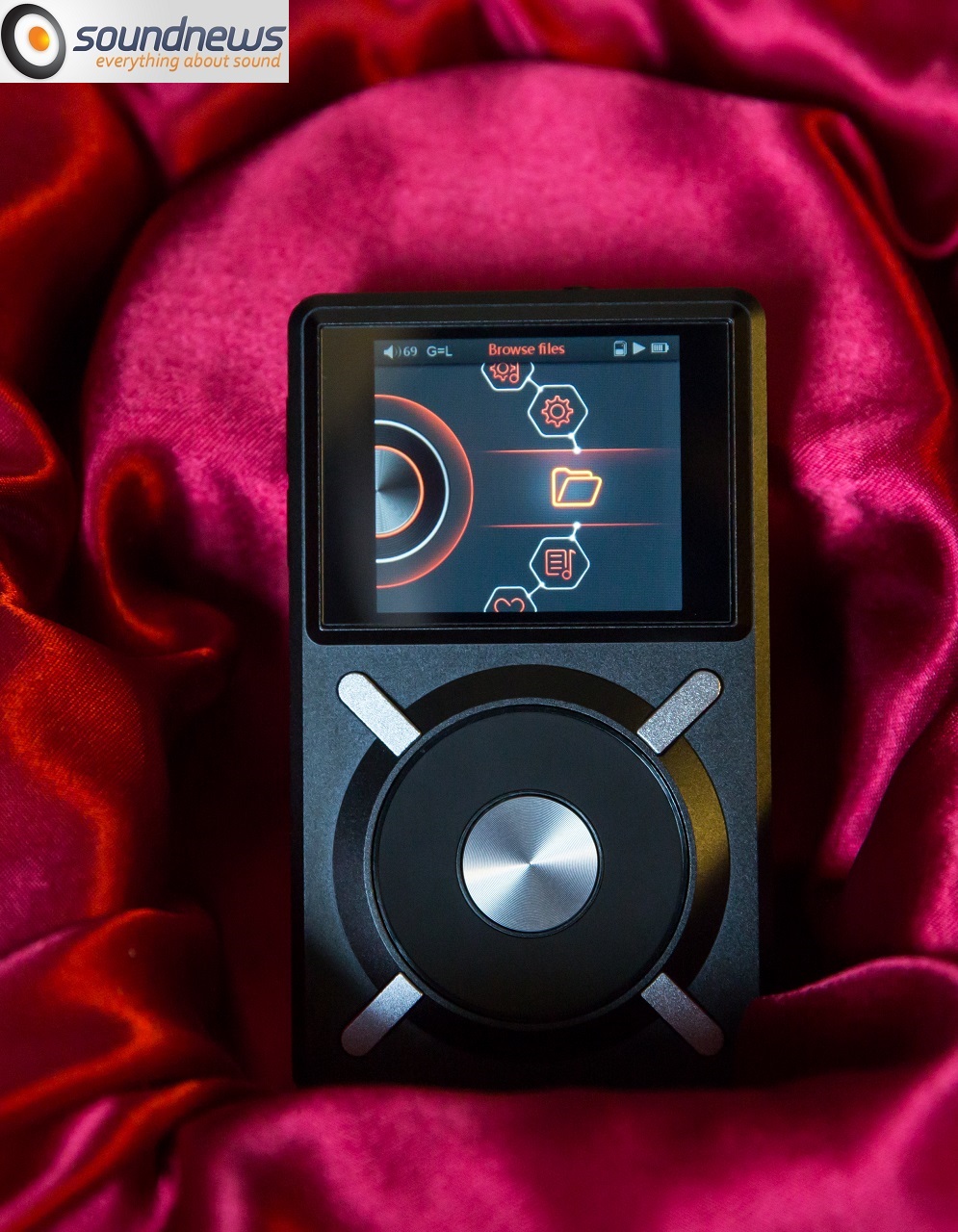 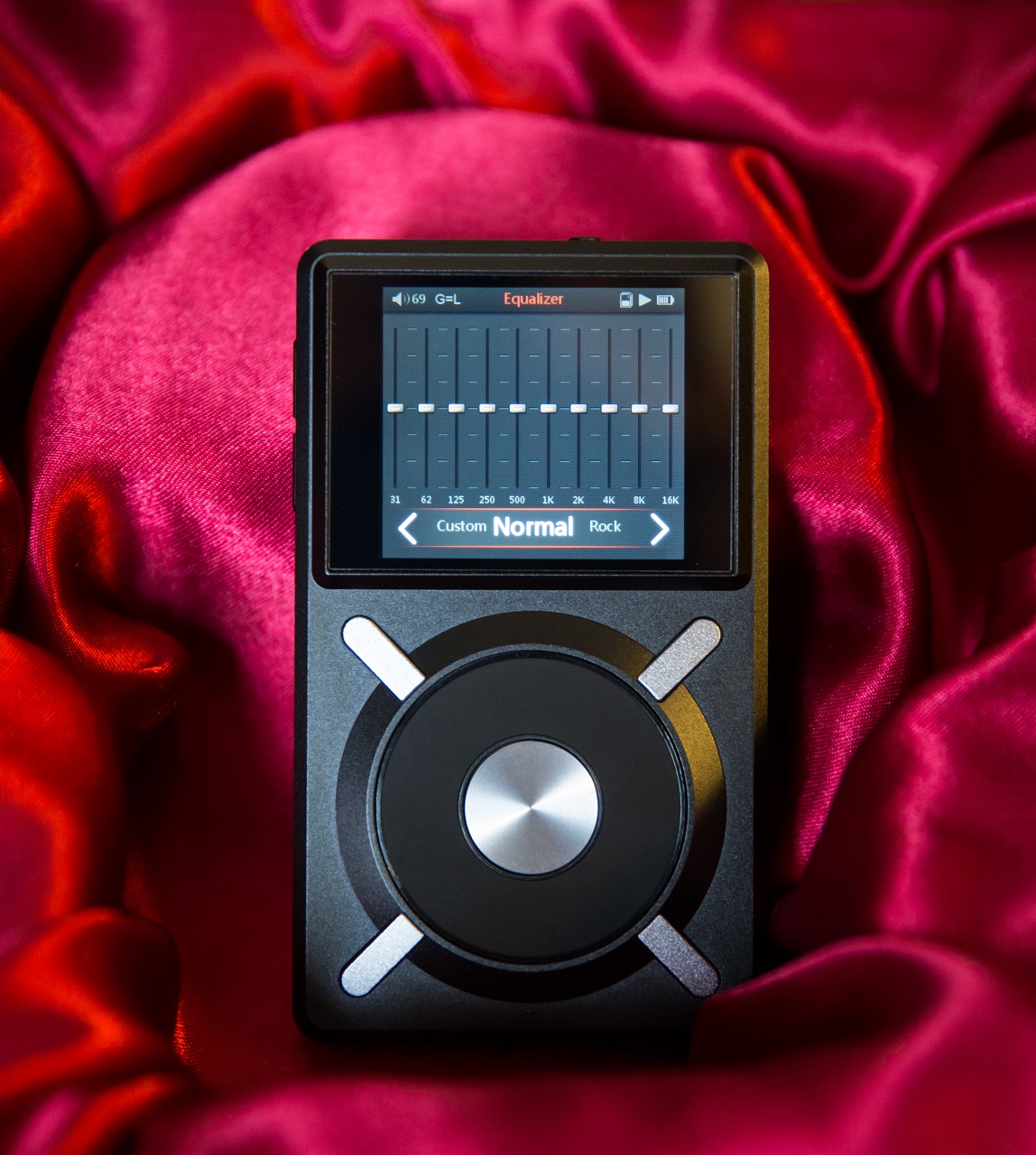 I started listening to the excellent music of Silent Strike, 3AM album.

I can congratulate the boys from Silent Strike, an excellent album and a great recording and mastering, it’s a reference for testing bass.

On Off Course Final and Electric Chick – I heard a deep bass, with a powerful kick, attack was fast, reverbs and distortions were not heard – a very good sign.

Distortions usually start from low frequencies and if I cannot detect them there it’s a sign that the device is well thought and put together. Bass is pretty impressive and doesn’t need any EQ, but surely bass lovers can use some to better tune the sound to personal preferences.

Bass together with the airy and holographic presentation fascinated me the most.

I also like the new Black Sabbath remasters, bass guitar sounded so authoritative and so well, that at a time when I was focused only on it a thought passed through my mind: where are the rest of the sounds? Incredible reproduction, deep bass, fast reverb, nothing to complain about.

Mids sounded pleasant, even sweet I would say, but not overly creamy/juicy. Male voices (upper bass/lower mids) had authority which I liked, female voices sounded melodious and I liked that they never mixed with the rest of musical notes.

String instruments and piano I also liked a lot, there were placed very well in a 3D field and sounded detailed and well defined.

High frequencies were the biggest improvement compared to rest of FiiO electronics. Those sound better than on X3, for jazz and classical music lovers X5 is an aural delight.

I understand very well what X3 owners say when listening to this music genres, the lack of sparkle in the highs region, lack of detail and of an airy sound were the points where X5 just excels. 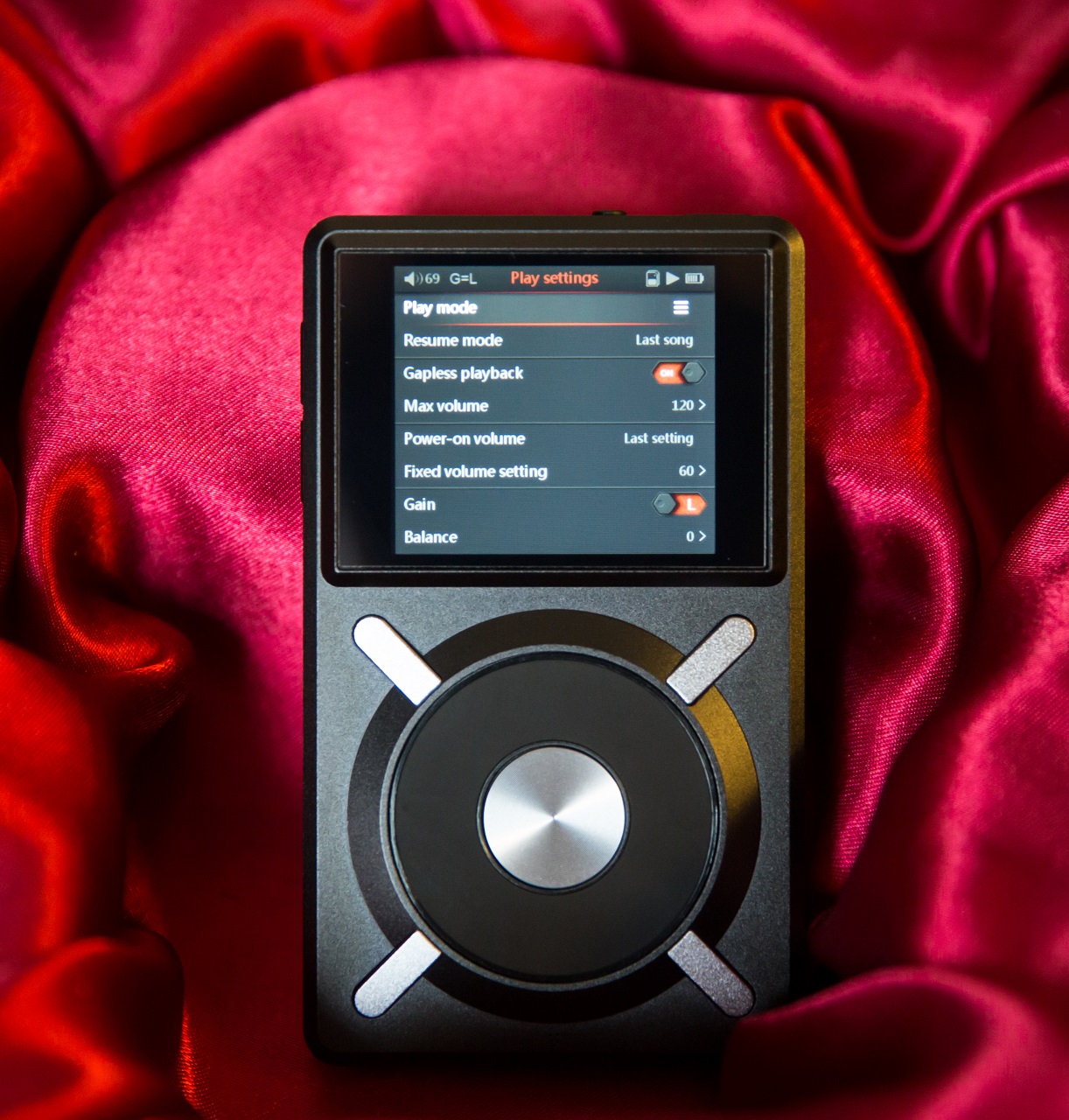 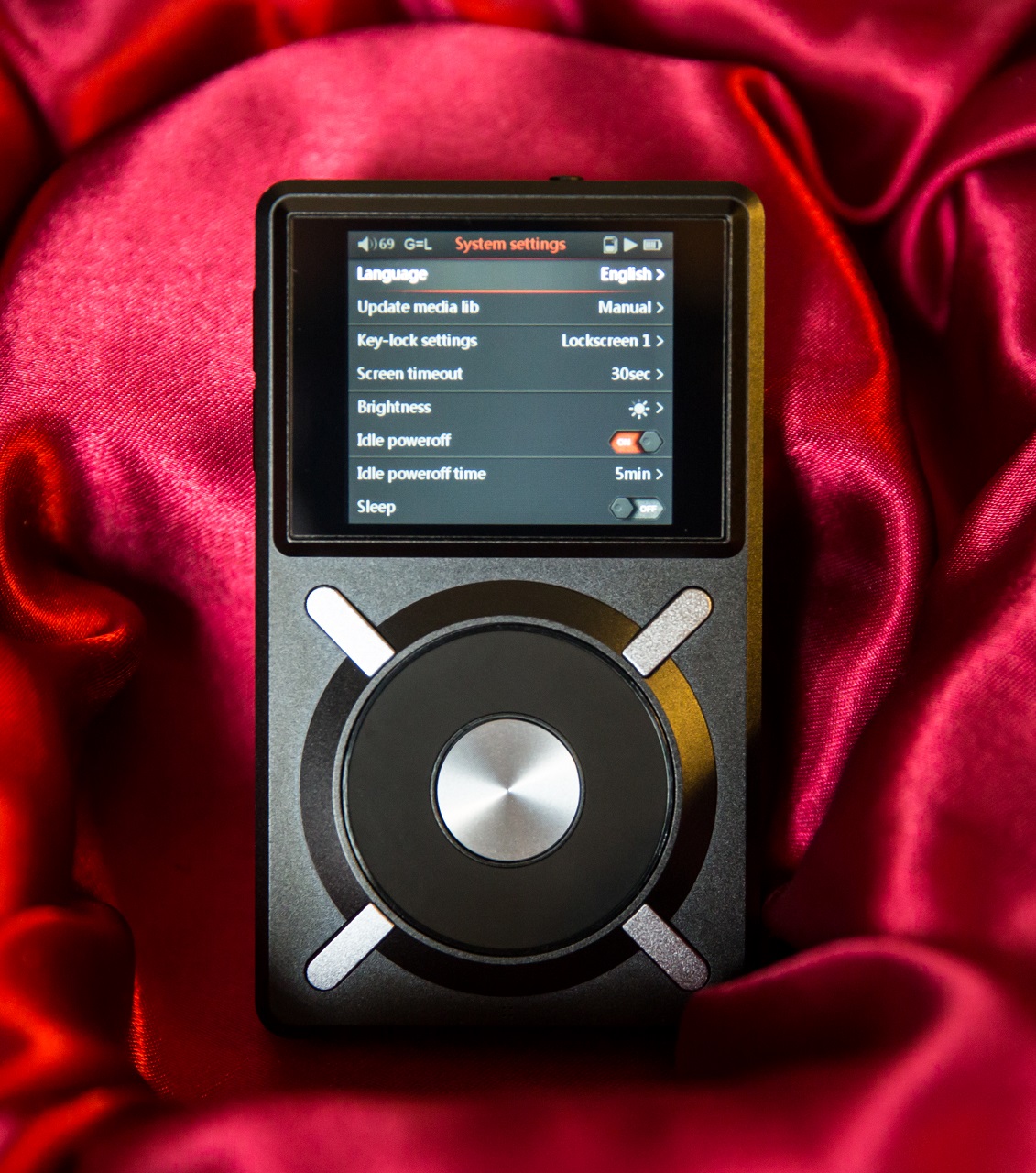 In terms of brute power X5 is almost on the same level as X3, offering more than ever necessary for majority of portable headphones. I used some Sennheiser Amperior, Sony MDR-1R and Ultimate Sound 3D with great success. All three were used in low gain, I touched high-gain only when tried heavy artillery, Audeze LCD-3, LCD-X and Sennheiser HD800. A big plus for X5 represents the performance of the built in headphone amp.

I personally think that having a player such as X5 you would never need additional power, all tested portable headphones were driven very well. Sennheiser HD650 and HD800 dynamic headphones had enough volume, but didn’t sound to their full potential, but maybe at 80% probably yes.

Audeze LCD-3 sounded in despair, without control, I’ve got a pale and slow sound, but let’s be serious, who would ever wear a pair of LCD-3 on the street?

For the power hungry ones, FiiO though prepares a special combo made from X5 and E12, that will provide enough power even for LCD-3 planar magnetics. 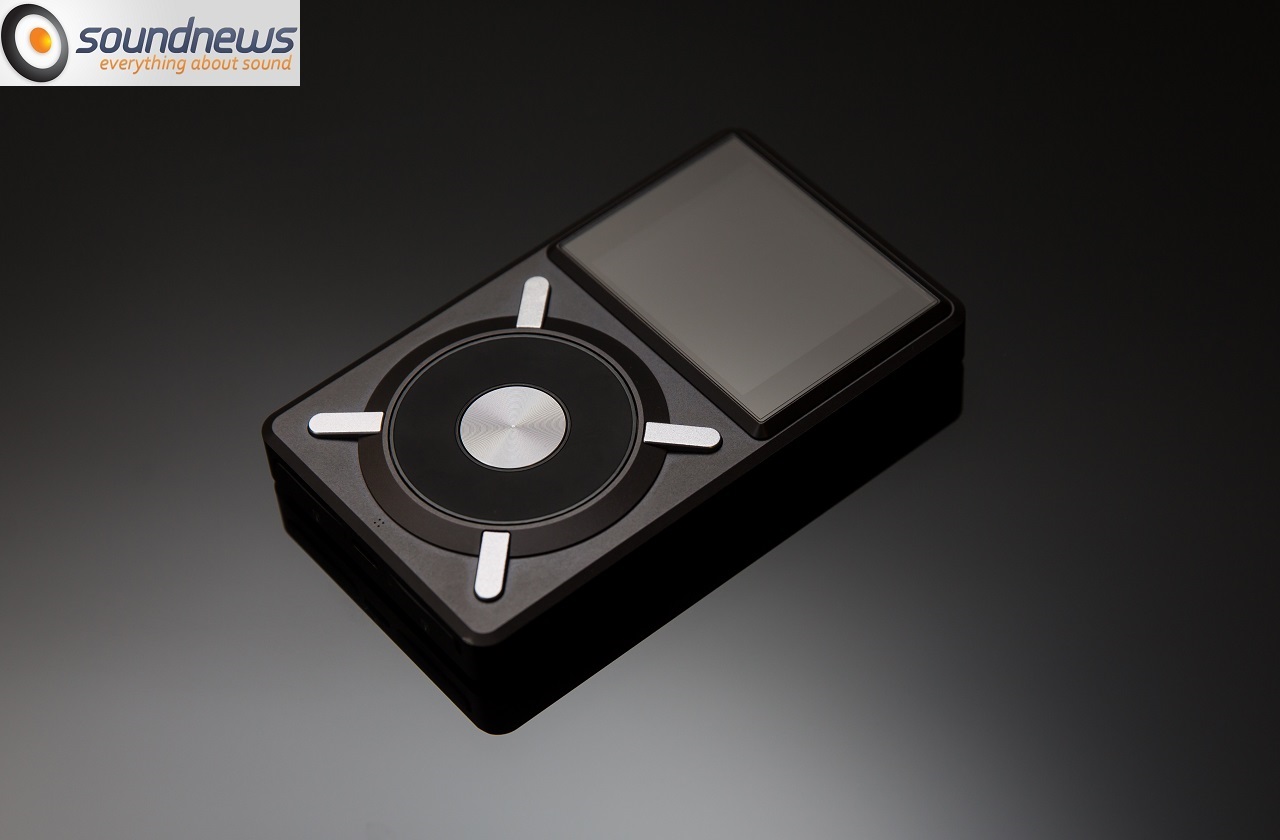 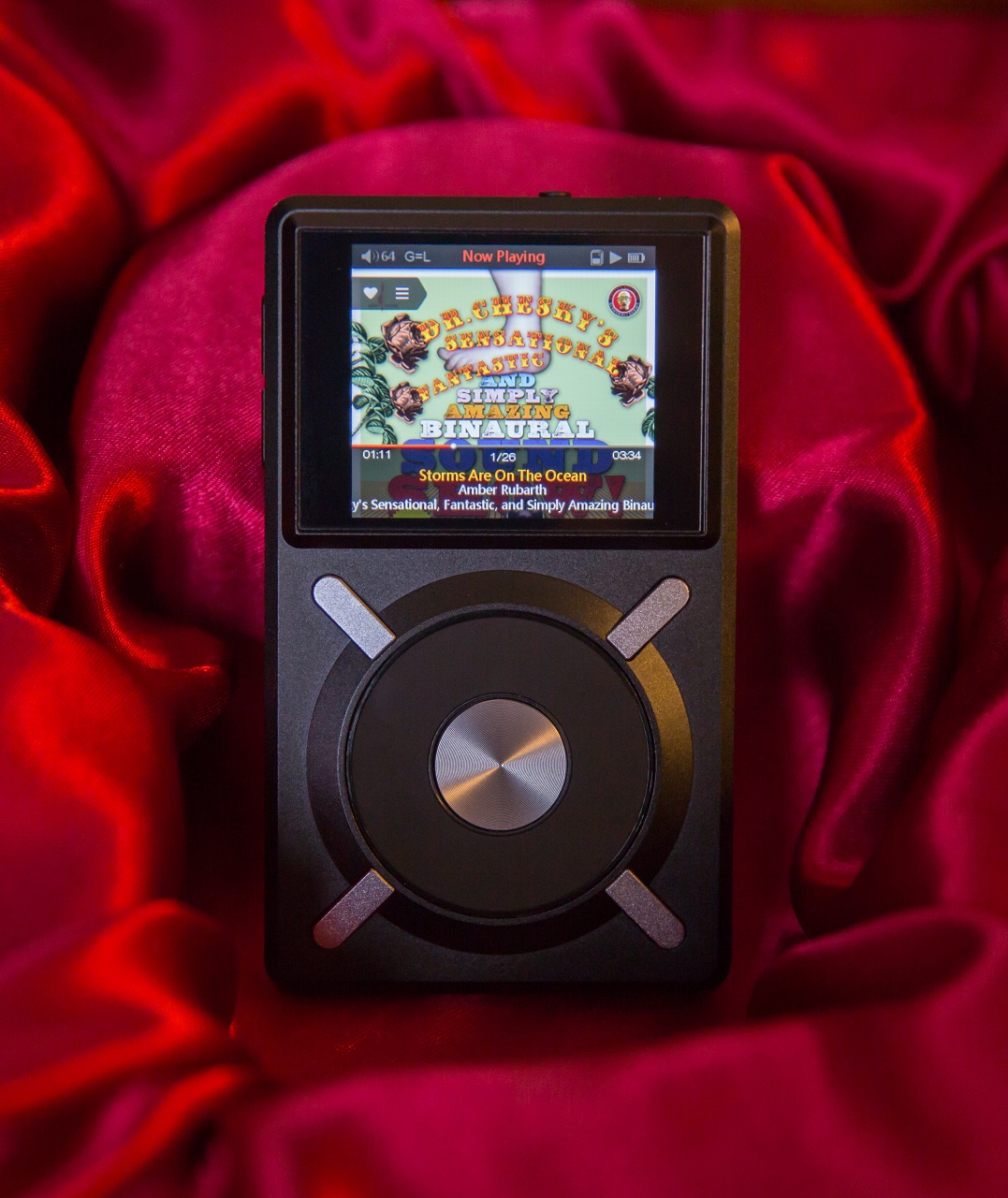 I will not bore you how X5 compares to X3, iPod, Sansa Clip/Fuze because it will be a boring comparison and we all know the results already.

Out of curiosity I compared the DAC performance of X5 with that of Burson Conductor which I own.

The small X5 sounded approximately the same. I found interesting that from X5 I’ve got a more 3D sound, more holographic, with an overall better stereo imagine. Conductor sounded as I would sit in first row from concert hall, a less holographic experience. Detail retrieval was slightly better on Conductor, but X5 was very close performance wise. As a whole X5 sounded very close to Burson Conductor, I am speaking DAC wise only, because Conductor destroys X5 when it comes to raw power. Given the fact that X5 is a portable device of 200 gr and Conductor has more than 5 kilos, it’s quite obvious who has better driving capability.

Unfortunately the firmware update for DSD playback is not out yet, so I could not test this feature yet, but if it sounds as good as PCM music then it’s a must buy product.

A DAC, a headphone amp, a digital transport and a high resolution audio player all are words that define X5.

It’s spartan design and semi-industrial looks may not please everyone, placing of buttons and menu wheel may not be appealing to someone, but if you are interested in audio performance only, then X5 delivers on all aspects.

When it comes to playing music I have nothing bad to say about it.

At 350 Euros, official price of X5 in Europe, it’s the new audiophile bargain by FiiO.

Yes, it’s more expensive than the rest what they did until now, but it’s very likely that you will not find the same quality, comparable features and audio reproduction at double the price! When I think that this sound reproduction I can get with me anywhere I put myself just one question: what does future holds to us, it can be better than this?

Cons:
–  Wheel precision
–  Lack of an on-board memory
–  Buttons not marked what they exactly do 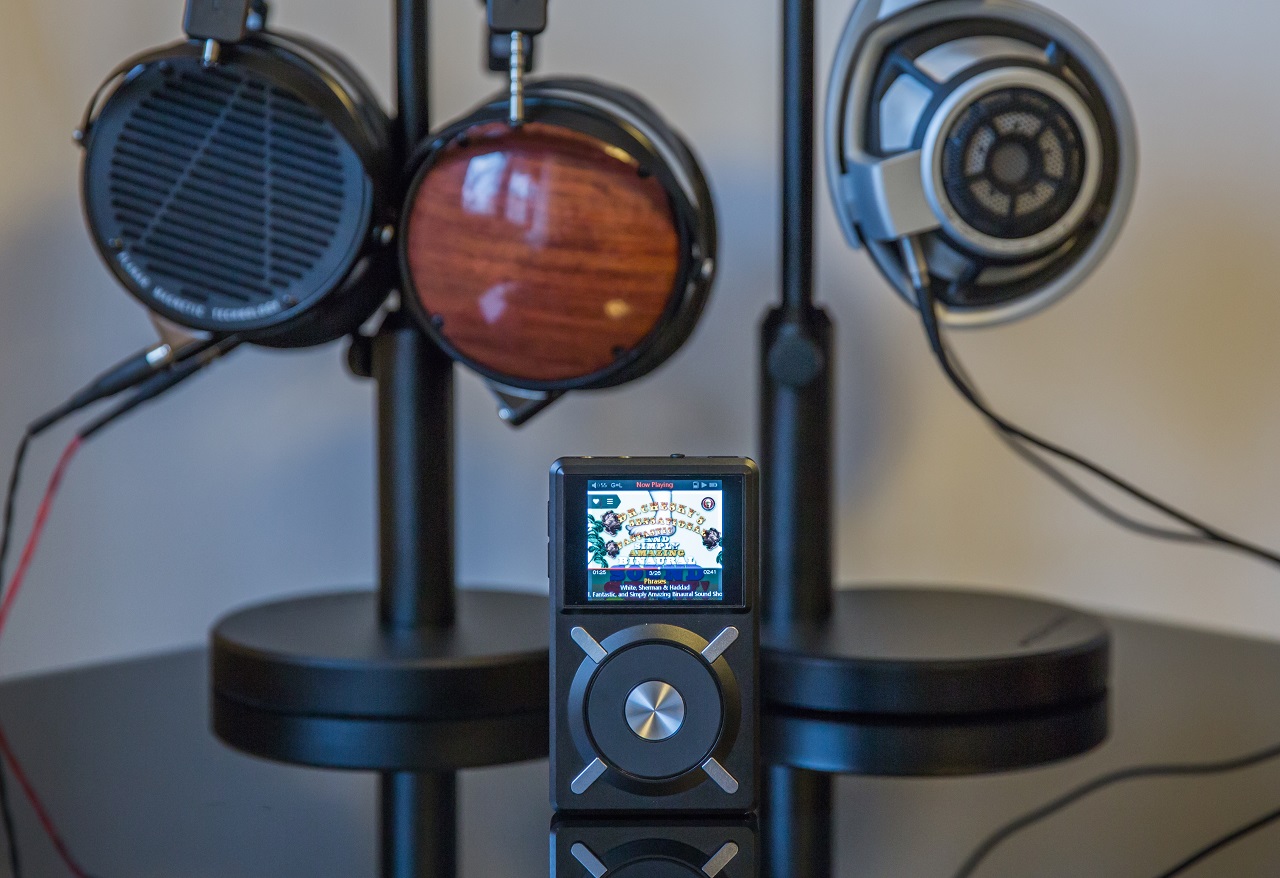 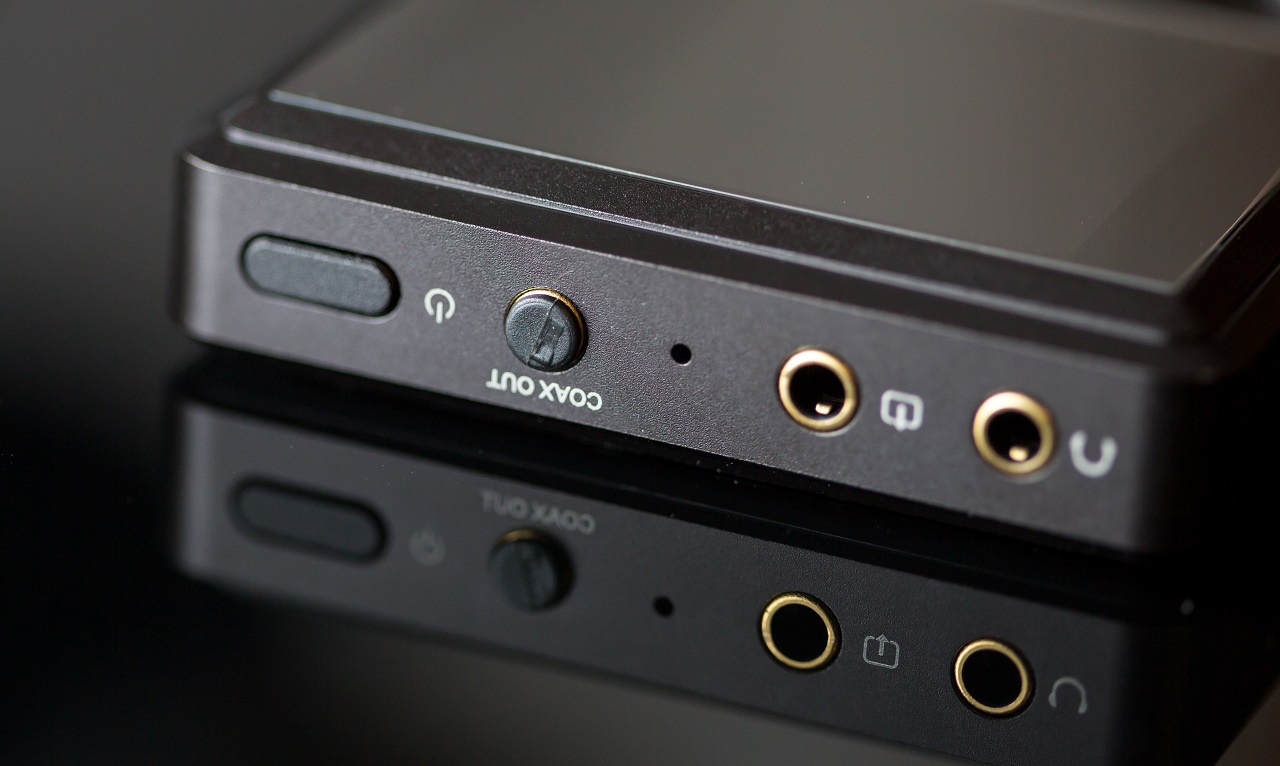