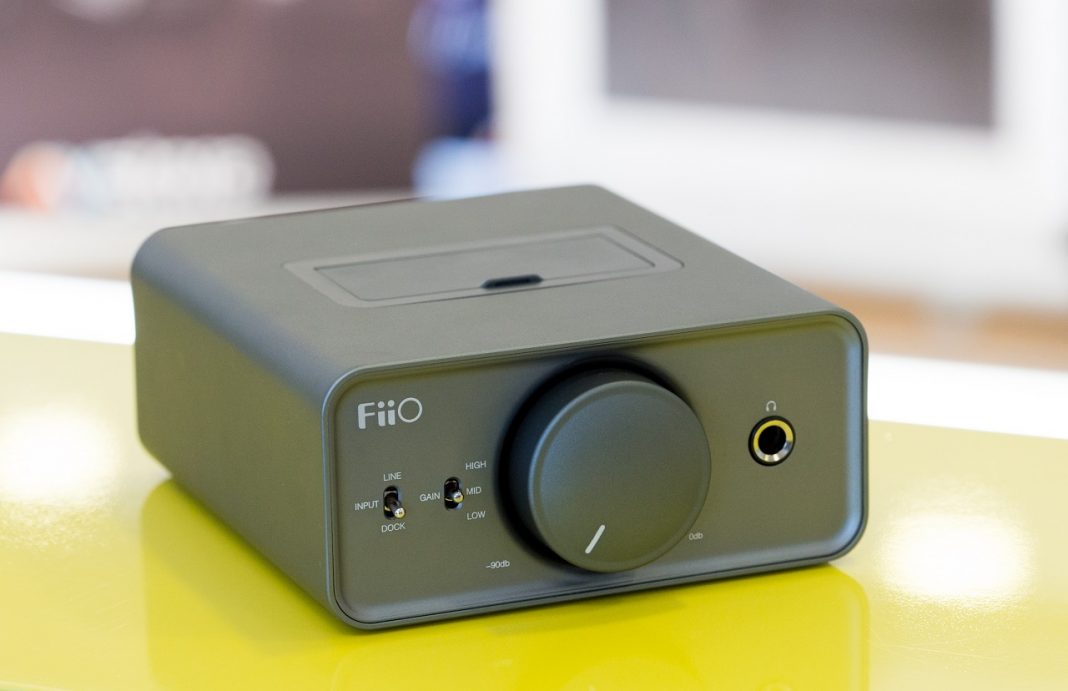 E09K was something special at launch, besides the fact it worked as a desktop headphone amp, it was also a dock for portable devices such as E07K and E17, transforming into a sexy looking mini desktop DAC/Amp.

From the moment FiiO decided that all future devices will use micro-USB connector it was clear that a new dock should be developed to support all this devices.

That day came and I present to you the newest K5, available right now at around 150 Euros.

From the start I can tell I like K5 design wise. It looks sleek, discrete and simple to use. Besides the fact that it works as a simple desktop headphone amp, you can dock to it all their DAPs: X1, X3 II, X5 II, X7 and E17K DAC/Amp using micro-USB connection.

All DAPs with exception of X1 work in two modes:

X1 cannot work in DAC mode, because it doesn’t have such a feature, E17K on the other hand works only in DAC mode, as it cannot be a standalone DAP.

My X1 being a pre-production unit didn’t work well with K5, it only charges my X1 and that’s all, music cannot be played via K5.

Rest assured all X1 production units will work with K5, FiiO confirmed it. 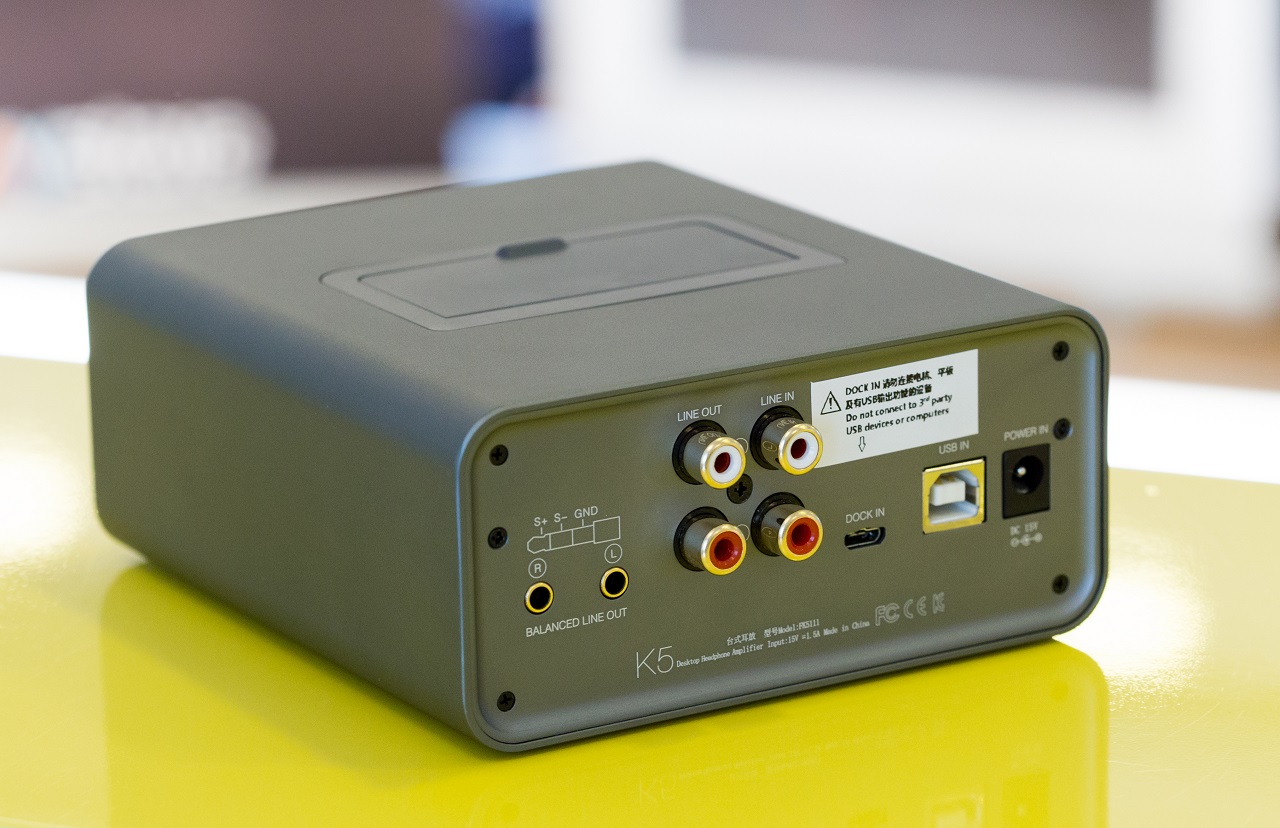 K5 on the outside:

On the back can be seen the USB, RCA input and a Line-Ouput via RCA (to use it as a preamp) a balanced output (via 3.5 TRRS connection). Unfortunately in the package there isn’t a 3.5mm to XLR cable.

The balanced out works only with X5 II and X7, with other DAPs it doesn’t work.

On the front the gain switch can be seen, input selector, volume wheel and 6.3mm headphone out.

On top of the case there is a small door that hides the micro-USB dock connector.

The case seems metal made, volume wheel is definitely plastic but it’s not that important.

Once turned on, the volume wheel is beautifully lit by a blue light, it really helps in dark lit rooms or on those night listening sessions. 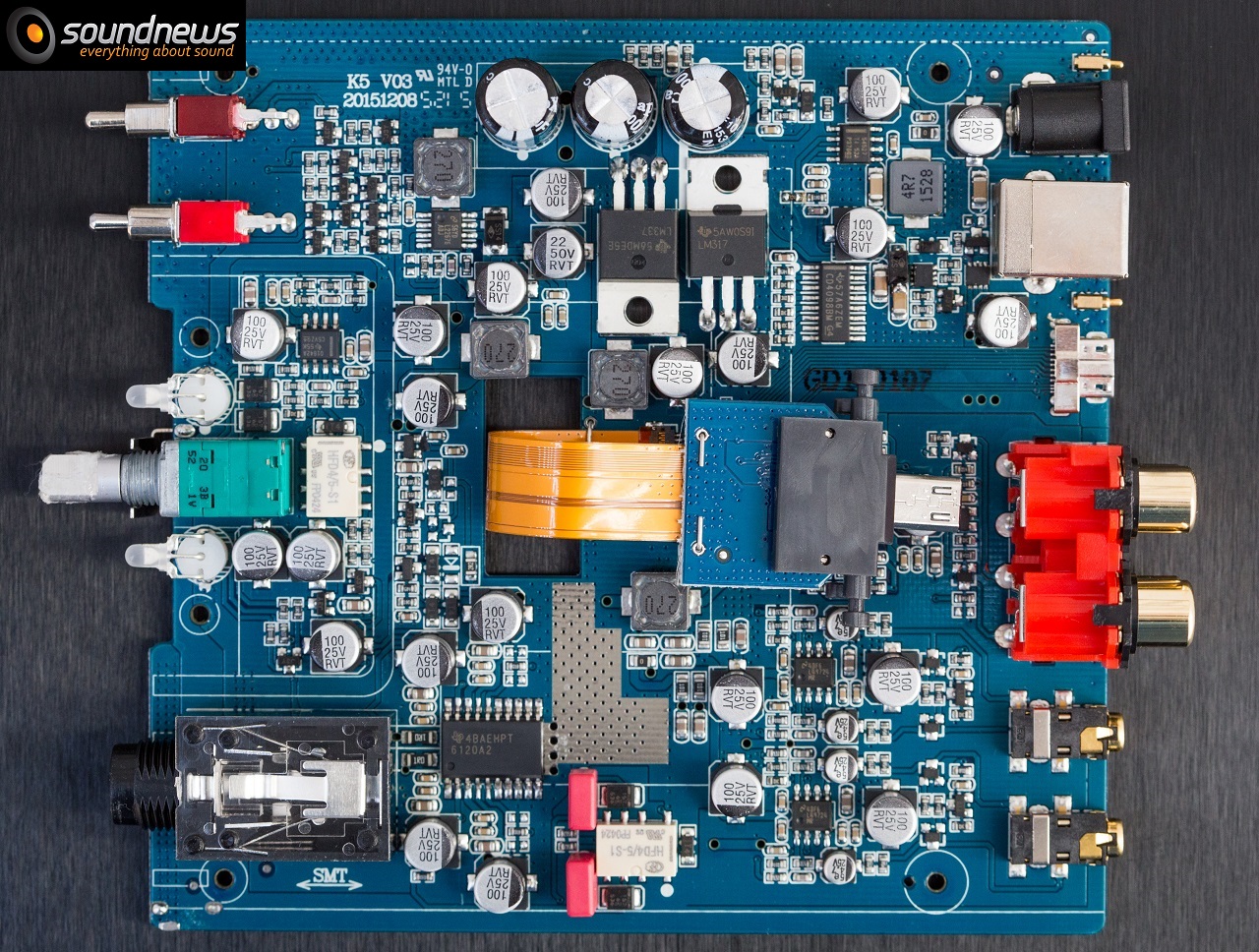 K5 on the inside:

As opposed to E09K output impedance was seriously lowered from 10 Ω to <1 Ω, IEM users rejoice! K5 will play nice with any headphones, damping factor remaining stable at any impedance, E09K in this regard was quite limited from medium to high impedance headphones.

At the heart on K5 stays the TPA6120A2 that I see very often in desktop headphone amps (it is present in iFi iCAN SE as an example).

According to specs this little dude can power almost anything, from small IEMs to big size planar-magnetics from Audeze or HiFiMan (with the exception of HE-6 of course).

The USB type B connection from the back should not confuse you, K5 doesn’t have an internal DAC, this port can be used only when a DAC ready FiiO device is docked on top such as X3II, X5II, X7 or E17K.

Besides amping the analog signal K5 will also charge any docked device.

For the best results from K5 I used an X7 docked to it and at the end of my tests I also used an external DAC: iFi iDAC2 connected to it. 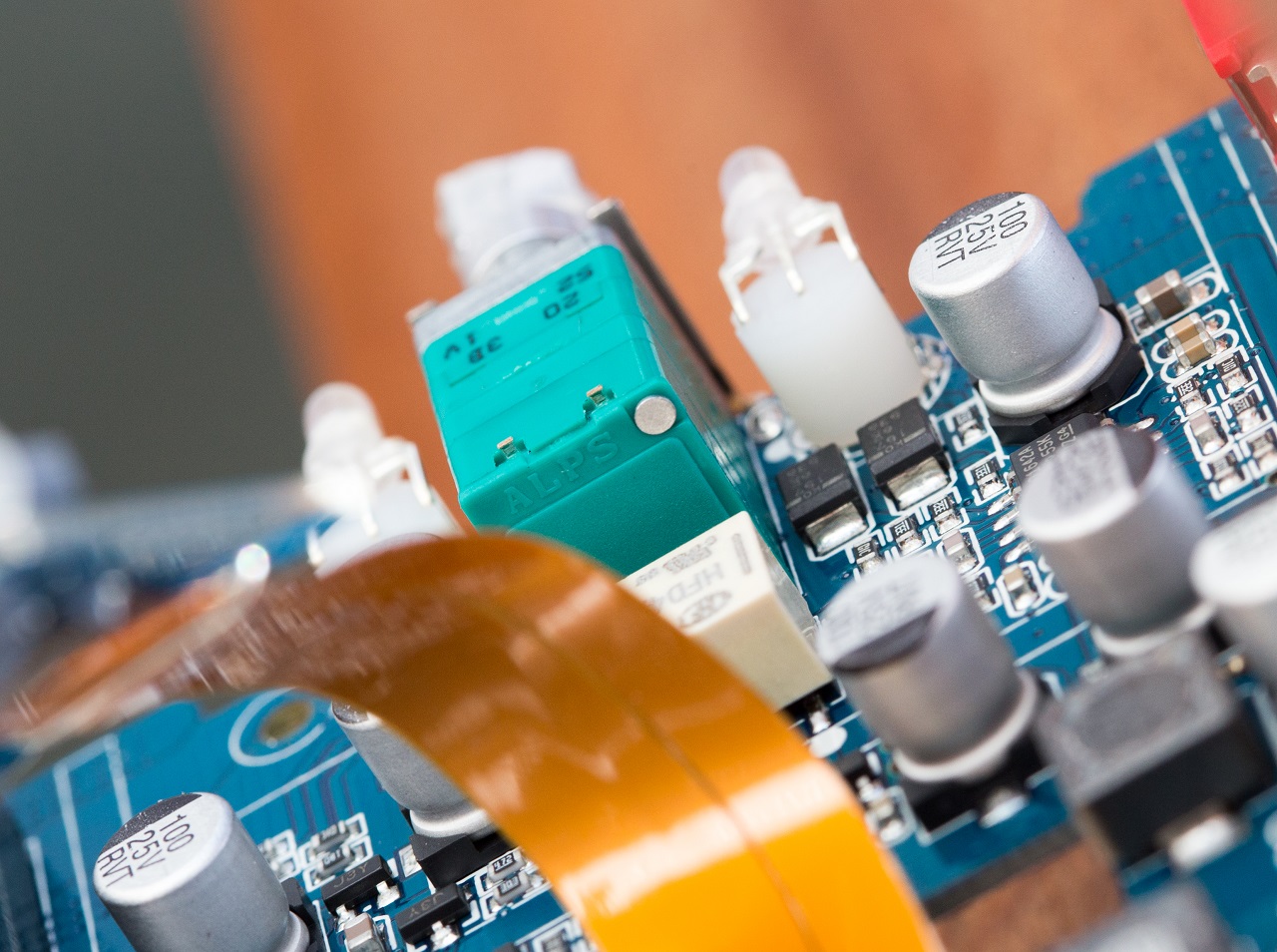 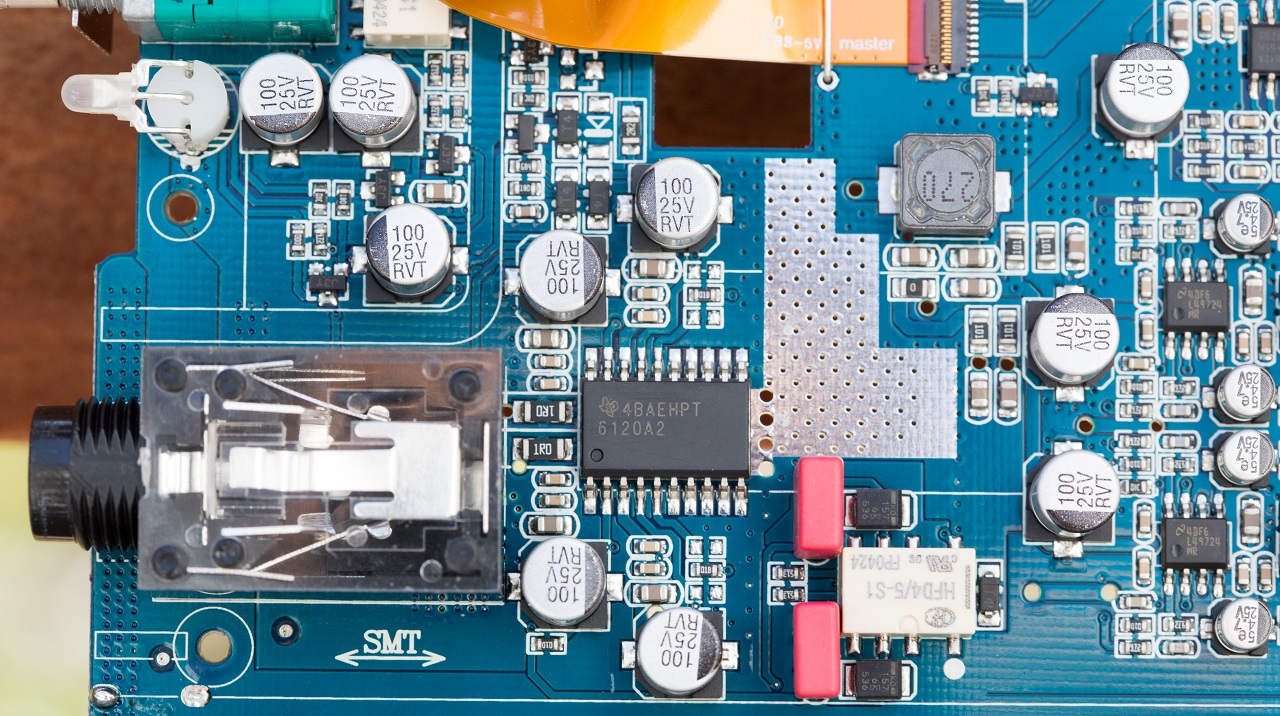 First thing that caught my eye is the power reserve it has.

The most inefficient headphone tested was HiFiMan HE-560. Surprisingly they were properly amped, using high gain volume reached 80% on some classical recordings (recorded at -14dB dynamic range).

Using K5 together with X7 I’ve got a robust and stable headphone based system.

X7 is able to portray an incredibly large and deep stage, as well detail retrieval from my favorite tunes is really good.

I was worried that K5 would add some kind of coloration to the purity of X7 sound and some layers of information will be lost.

K5 is not adding coloration to the X7, I think it takes the best from X7 and multiplies them adding raw power to the mix.

Comparing to its predecessor (E09K) this amp doesn’t has a dark sound signature, that put a lot of pressure on mids and bass. No, K5 is pretty linear but not so much to become boring sounding.

K5 sound kind of fresh, lively and for sure has good rambling bass and detailed trebles.

Everything seems at its place and on the first inspection nothing bothers me. 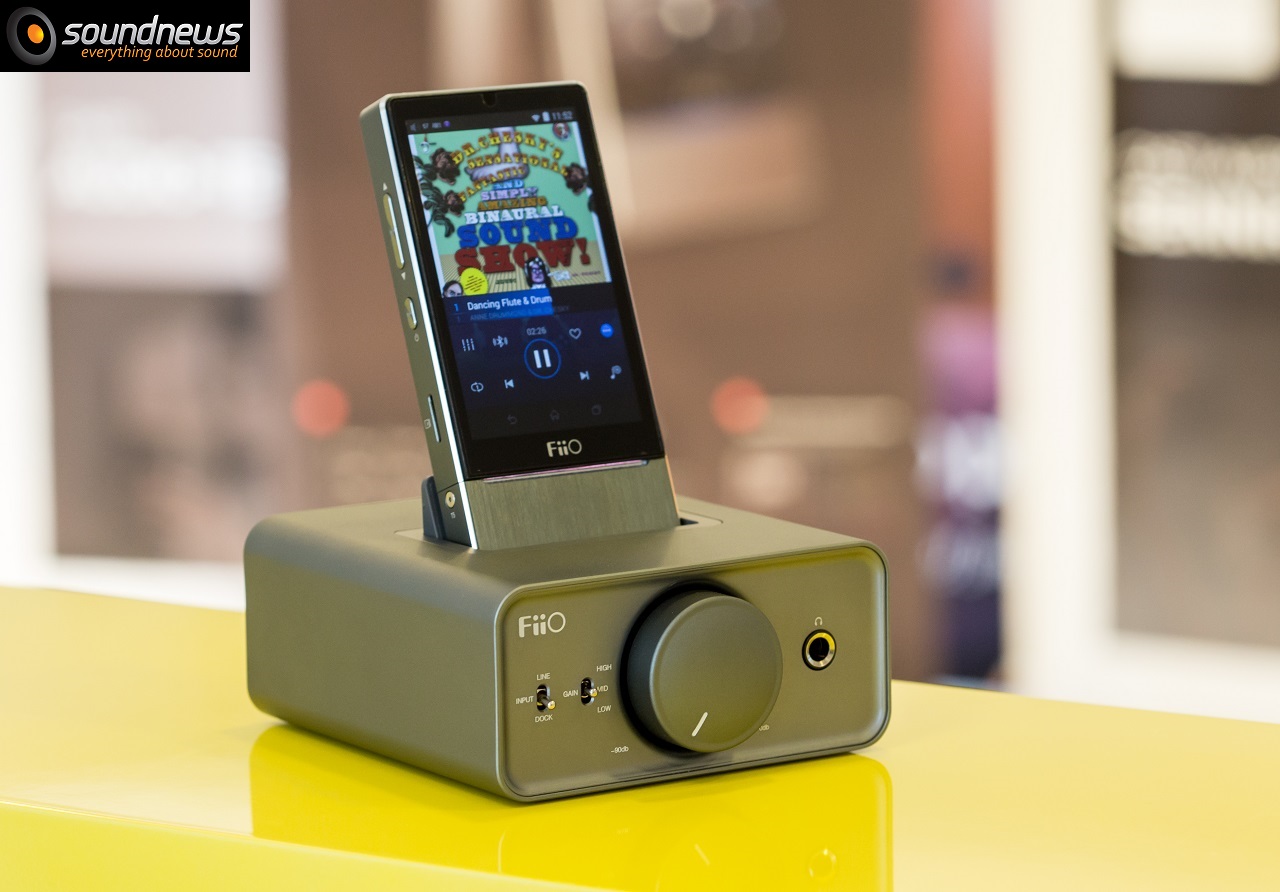 With HE-560 I’ve got a deeper and more present bass than expected, this suggests that these headphones are properly amped.

One thing thought bothered me on HE-560: Bass purity. Although K5 has a quite fast and controlled bass, it isn’t the cleanest one, the multitude of bass layers on electronica was not felt.

This effect is not very obvious, but on a prolonged listening session it became clear to me. The purity brought up by X7 is slightly taken down by K5, instead when X3 II or X5 II was used I didn’t feel the same cause and effect.

Voices and string instruments were projected on prime plan, the amplifier for sure doesn’t outline or emphasize more than needed mid frequencies. Guitar plucks suffered a bit, the string vibrations stops rather abruptly, its like musical notes decline would happen too quickly. Apart from this I have nothing else to cry about, especially at this price point.

High frequencies have the bite and the glitter that is needed to feel them but not to be bothered by them. Highs were quite airy but not overly emphasized to bother me somehow.

X7 at this part is very capable and detailed, portraying highs in a relaxed and smooth manner.

K5 doesn’t emphasize the treble, nor it calms it, it leaves it at its place.

On harder to drive headphones K5 passed with flying colors keeping up with high dynamic range and with crowded music.

Listening to Rigoletto, Otello and La Traviata by G.Verdi I came to realize that dynamics were almost untouched.

On Presto Agitato in C Minor by L.V.Beethoven and Presto by A.Vivaldi the emotions felt have not decreased in intensity and I liked what I heard.

Stage is pretty large in width and length but limitations can be heard, the sounds are like hitting an imaginary wall after a short period of time.

The sound is also not very deep how big dollar desktop headphone amps are doing but I can’t complain about this at this price point and it’s a non issue overall.

Connected to any of FiiO DAPs we get a decent and a very versatile desktop audio system. 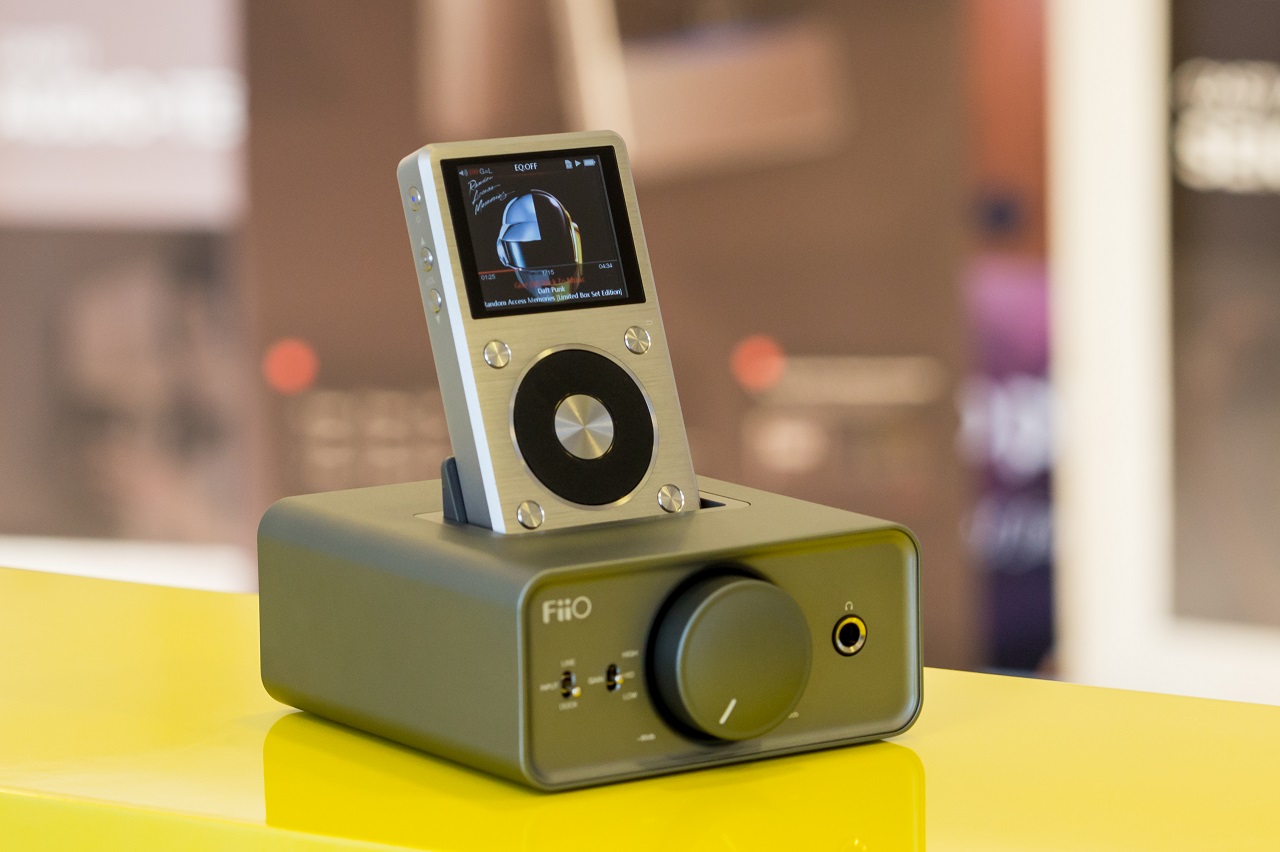 For 150 Euros we get a capable desktop headphone amp and a very elegant dock for recent FiiO DAPs.

It’s connectivity with FiiO DAPs is pretty intelligent, it charges them and powers them on when K5 is also powering on, and powers off docked devices when it goes off.

To my joy K5 doesn’t have a sound coloration any more and doesn’t stay too much in front of sound purity, it’s a pretty honest device and brings a significant amount of power and dynamics when needed.

Dynamic or planar magnetic, portable or desktop, K5 will drive basically any pair of earphones or headphones at ear bleeding levels.

I enjoyed K5 and I consider it a hard to beat entry-level headphone amp.

Fun begins with Burson (aka the Burson Fun review)

Burson Audio goes with a Bang