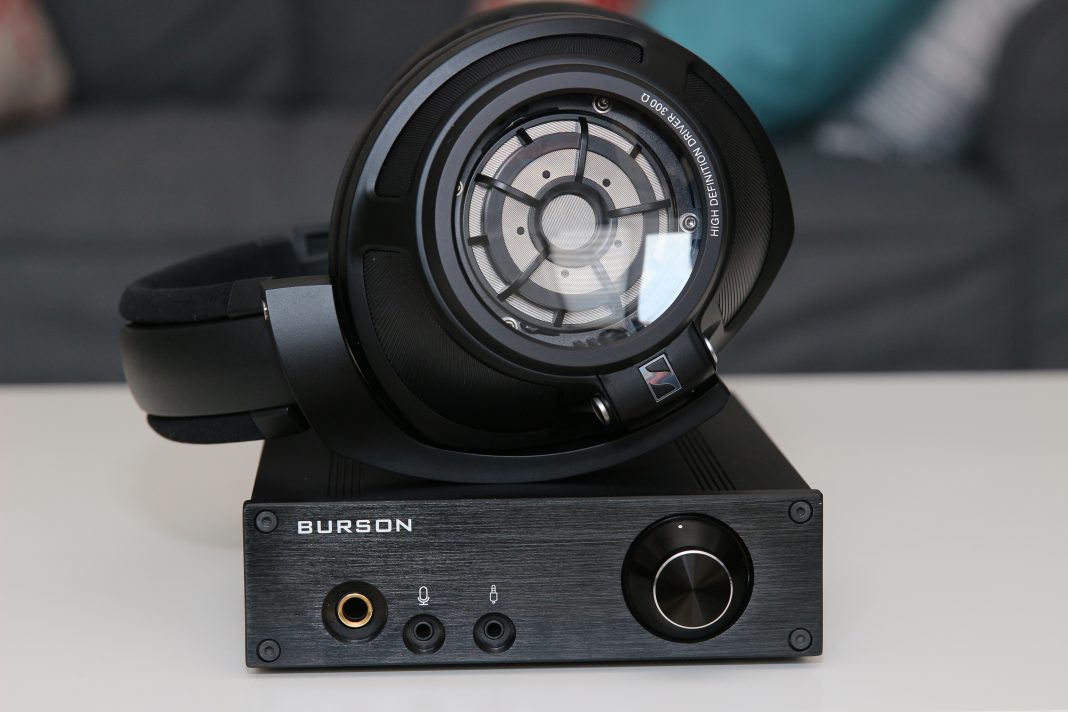 When I was testing out the Burson Play it really opened my mind that good sounding gear should not cost a fortune. I loved everything about the Play… well except the fact that it didn’t have RCA analog inputs, so it could not be used as a stand alone headphone amp to properly evaluate it with a higher quality DAC.

Burson completely solved my concerns with the introduction of the Fun: a simple and elegant desktop headphone amp and pre-amp.

On the plus side it has a higher driving power than Play, it has analog inputs (Duh!) but on the down side the DAC part was completely removed.

As a single solution Play probably is a better choice but for someone that already owns a higher quality DAC, the Burson Fun makes a lot more sense.

Fun along with the Play in my opinion has a very dynamic and mood lifting sound signature that I rarely hear at this price points. That’s due to dual mono Class A headphone and preamp inside. Its symmetrical circuit is powered by four sets of Max Current Power Supplies (MCPS). This power supply is more advanced and far superior to traditional transformers delivering instant, clean, and maximum electric current to the Fun

Is important to know that Fun is using the fully discrete amplification stage found in the 1500 USD Burson Conductor V2! It is basically the same circuitry Burson Audio is refining since 2008 and famed for its incredible micro details and musicality.

I am enjoying the Burson Fun for about one month already and I feel I’m ready to leave my full impressions. 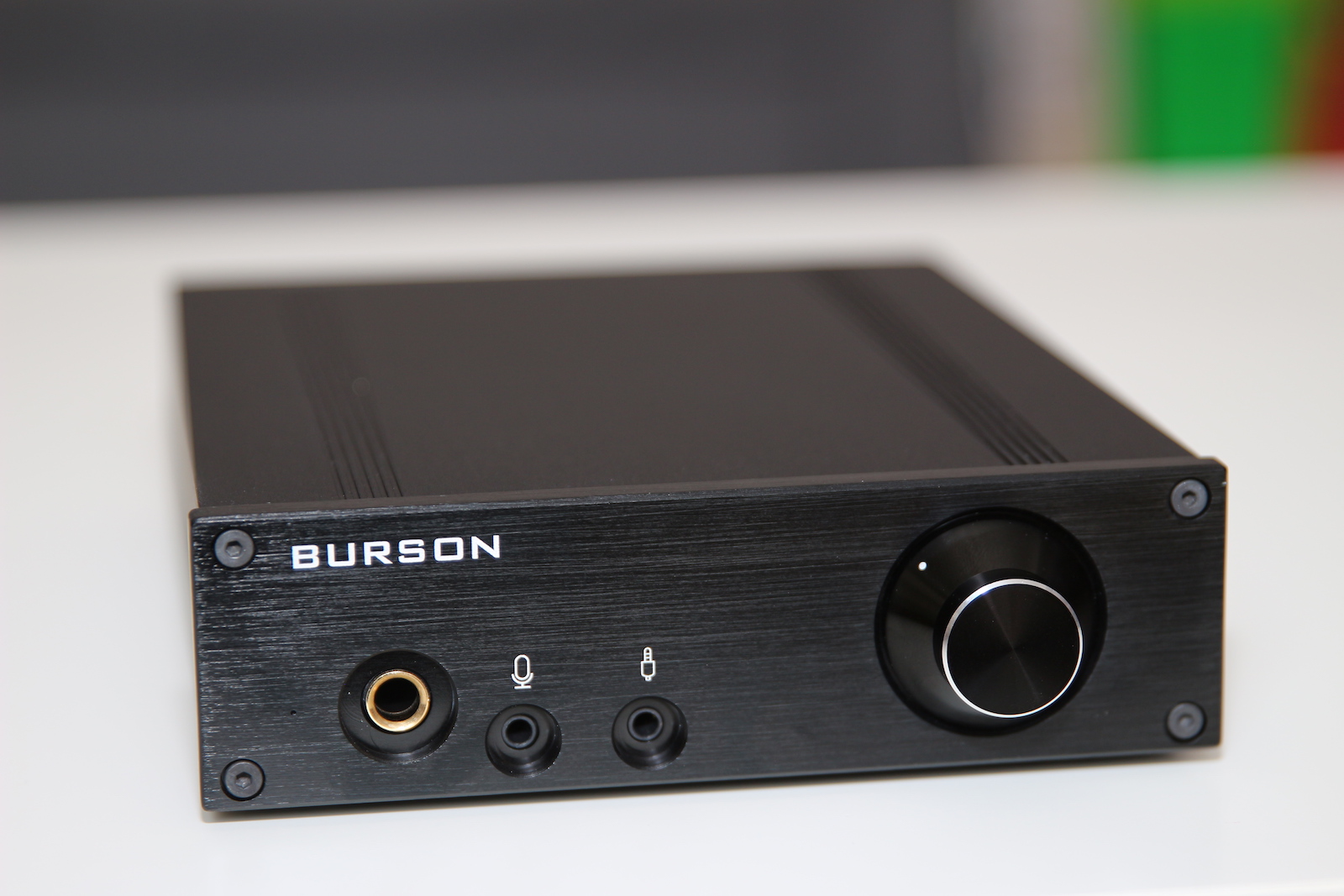 Do not be fooled by its small footprint, Fun as its siblings Play and Bang were designed around the 5.25” PC drive bays, so Burson Fun can be integrated in any tower gaming PC or in regular small, mid tower or full tower cases that have at least one 5.25” drive bay. In this case it can be powered by a single Molex 4 pin cable that goes directly from your PC power supply and you really should not worry about the quality of your power supply because Burson already thought about that in advance and integrated a voltage regulator inside so that your PC’s power supply will have a minimal impact on sound quality.

Fun can also be used as an external device as I was planning to do, being powered by a simple SMPS external power supply.

Besides the usual headphone out, RCA analog input and the RCA pre-amp output, there is also a 3.5mm (1/8”) Mic input and 3.5 mm (1/8”) Mic output, so gamers and streamers out there can really put those sockets to good use.

Of course the stars of the show are the Burson developed ICs always working in the magical class A circuitry powering the headphone amplifier that are fed by four sets of revolutionary Max Current Power Supplies (MCPS) developed by Burson, the Fun is really one of the most powerful headphone amplifiers in the world.

And I can attest that, if it can easily power a set of Audeze LCD-4 and Sennheiser HD820 with ease, then it can power any headphones in the world.

Besides that, lesser op-amps in the signal path will always yield a more transparent and breathing sound, so in advance I already hope that Fun will sound even better than the Play.

The Fun is being sold in 3 variants: the basic one that uses NE5543 op-amps, other two variants are using much more advanced discrete op-amps such as V6 Classic or V6 Vivid.

I have the Basic version, but please don’t worry as in its stock form it already impressed me enough. 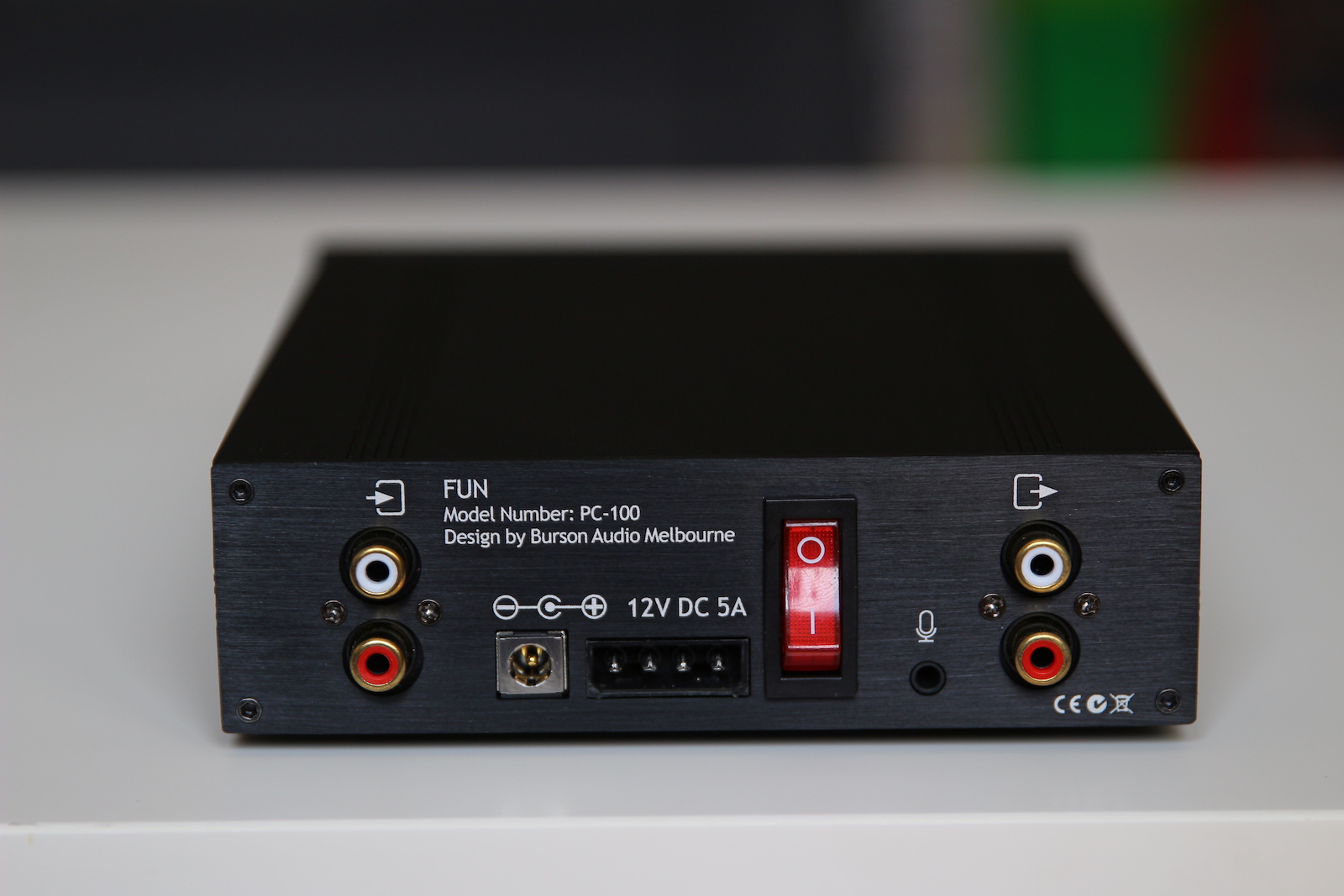 When I was testing the Play I was impressed by the output power it was capable of, delivering power even for most power hungry headphones such as Audeze LCD-4. Funny thing is that this little guy (Fun) is even more powerful. Using four sets of MCSPs instead of three sets on Play really made a difference. Especially for higher impedance headphones such as Sennheiser HD820 I was testing it with.

For HD820 Fun will deliver three times the output power compared to the Play.

Connected to a standard 2.2 Volt output DAC I can’t go higher than 50% volume on Fun powering a set of HD820, more than that and I feel that my eardrums will blow! 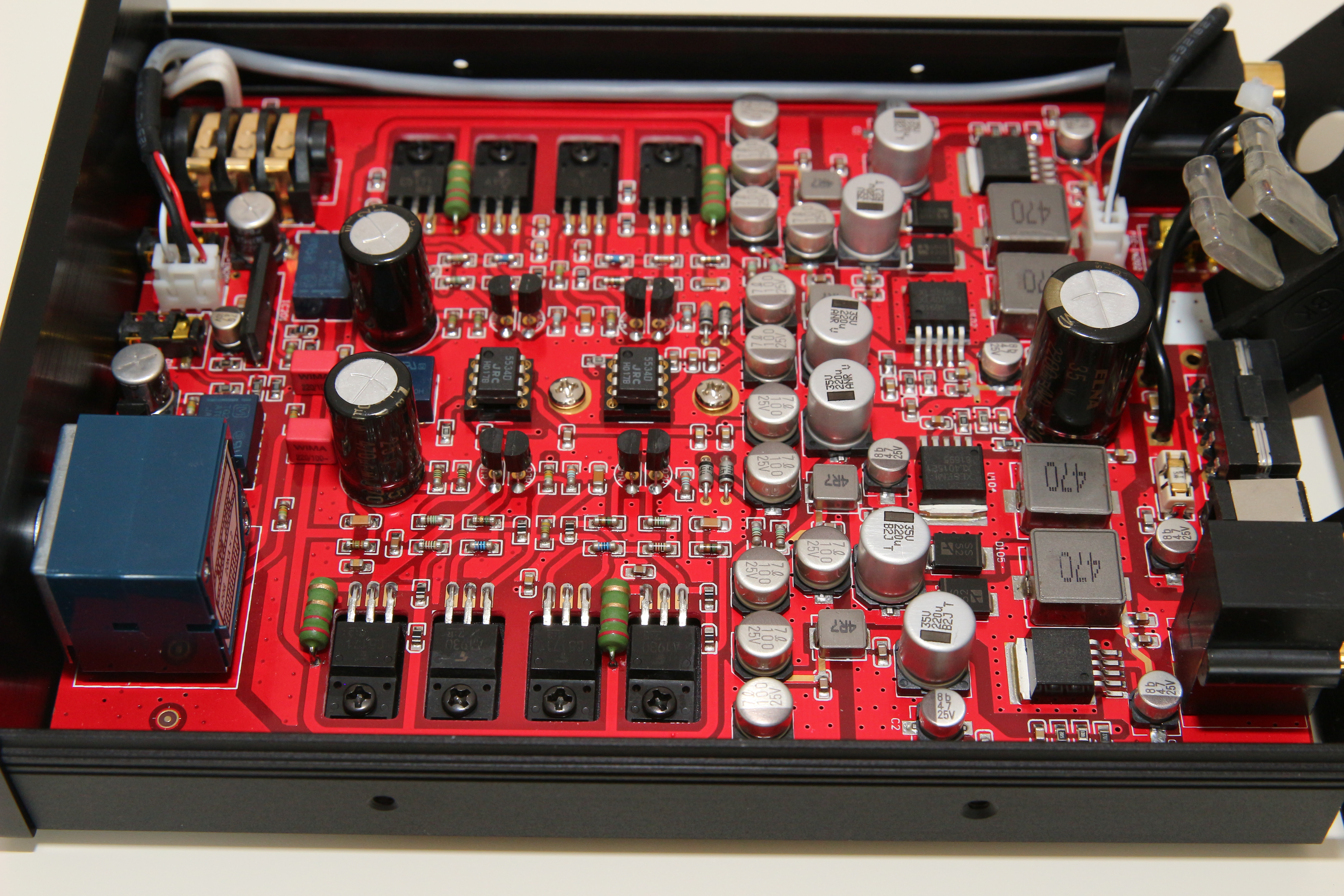 Second thing that struck me is the control and speed Fun is capable of. For example Play in its own right had a remarkable control over the headphone drivers, small or big, headphone transducers always hit hard and fast. With Fun take that up a notch.

Every sound hits harder and faster with clearly a better control over the headphone drivers. As a headphone amp Fun will appease even vast majority of headphone enthusiasts, please take a listen to one if an opportunity will occur. 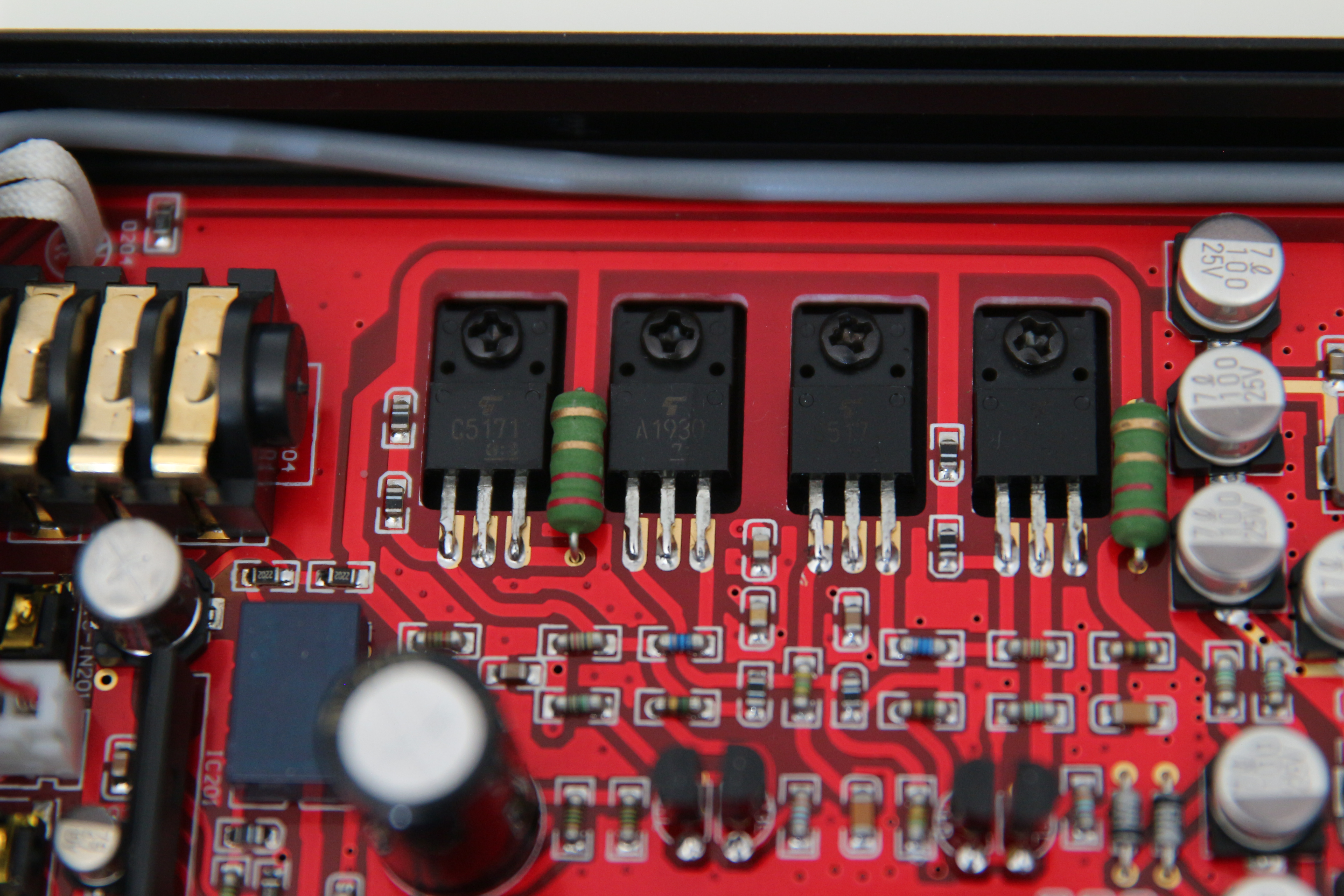 Third thing that was clearly different compared to Play is the overall clarity and resolution. It is on a higher level on Fun compared to Play, it even rivals my own Headamp Gilmore Lite MK2 in terms of transparency, airiness and resolution and we already know that Headamp is making ones of the most transparent head amps out there.

There is not a big difference in terms of overall clarity and transparency compared to Play but is a very noticeable one. It was very apparent on HD820 and on tiny FH5 hybrids.

I personally don’t use IEMs at home connected to desktop audio gear, I use them exclusively on the go, but to those that use IEMs with desktop gear as well should know that Fun works much better than Play – it has a lower noise floor and hiss is practically non-existent with sensible earphones. There is only a faint hum only on higher volume when music is not playing. Apart from that, to me Fun can be used with BAs or hybrid IEMs no problemo, on the other hand Play was doing just an Ok job with those.

Before going forward just a quick summary: Up until now Fun has more power, better control over the drivers, sounds clearer and more transparent, has a lower noise floor and hiss with sensitive earphones compared to Play! Impressive isn’t it? 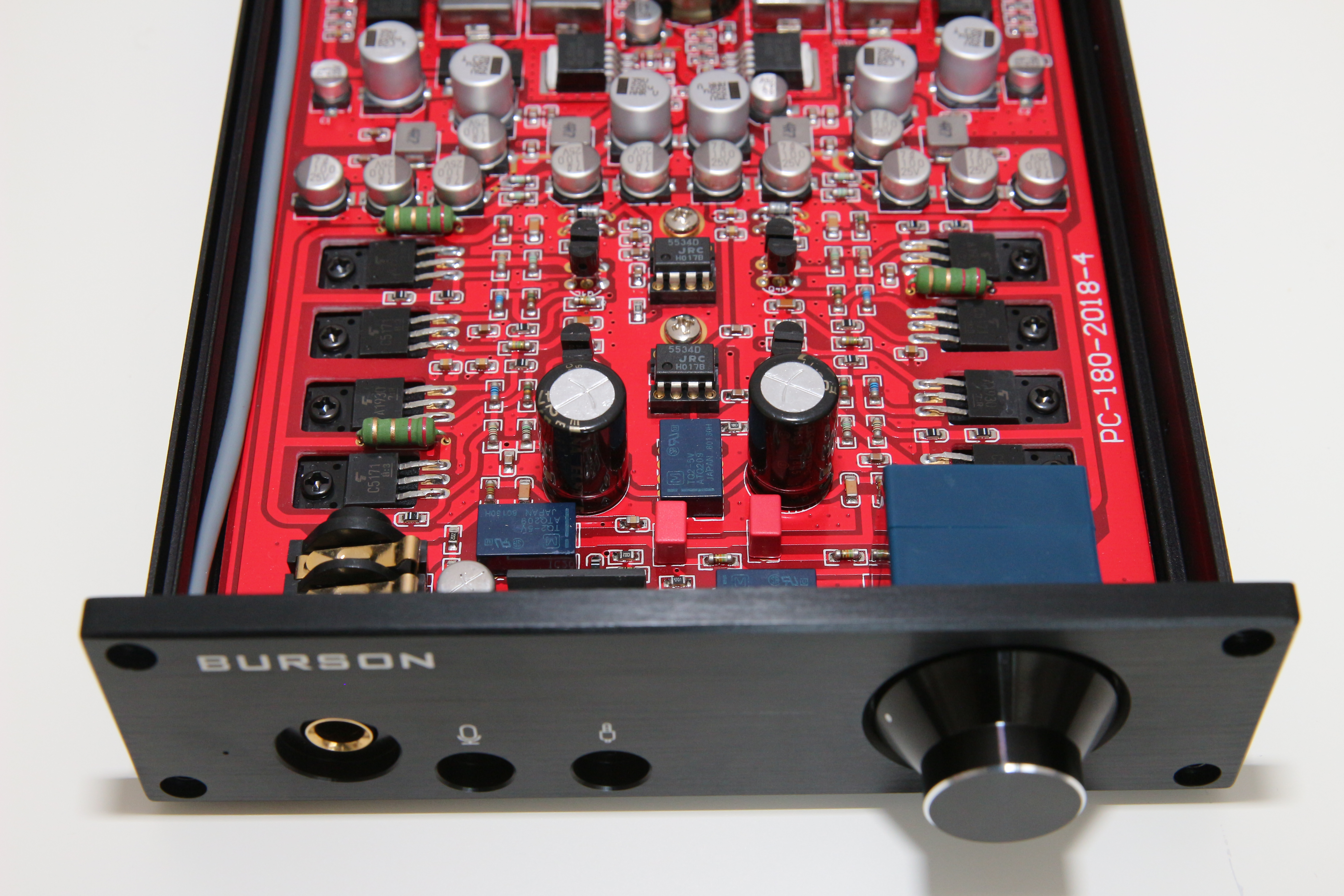 More power and a better transparency will always lead to a better impact and to a faster transient response.

Listening to some local alternative/hardcore metal: Implant Pentru Refuz (IPR for short) it was clear to me that I am dealing with a really fast and agile performance.

Double drums and hi-hats had the right amount of spark and zing. I really liked that the treble was not as bright as it was on older Burson Designs (160D and Conductor V1 I am looking at you!) and in return it sounded as having a better shape/outlines. The hi-hats & cymbals never had an annoying delay but just right amount of presence and decay.

To me treble response is where I see the most improvement over the older Burson designs and a slight improvement even to Play where sometimes it had a little more bite than needed.

The bass and mid frequency response is almost identical to that of Burson Play and other Burson designs. The sound overall has a lot of meat to the bone, sounds full and pleasant to the ear. It’s not warm or dark by any means; I’m calling it class A sound, if you get what I mean.

Trebles are crisp, maybe too sparkly sometimes; with few headphones I really like this effect. It is not overdone even with Sennheiser HD820 but it may be too much with something like a HD800 or Beyers.

I also like that sounds are not lingering too much so overall the sound is going towards great speed and impact and not towards a romantic experience.

If you are enjoying a slightly slower speed & impact and a more rounder & romantic experience I do recommend looking at other amps as Fun will not deliver that. 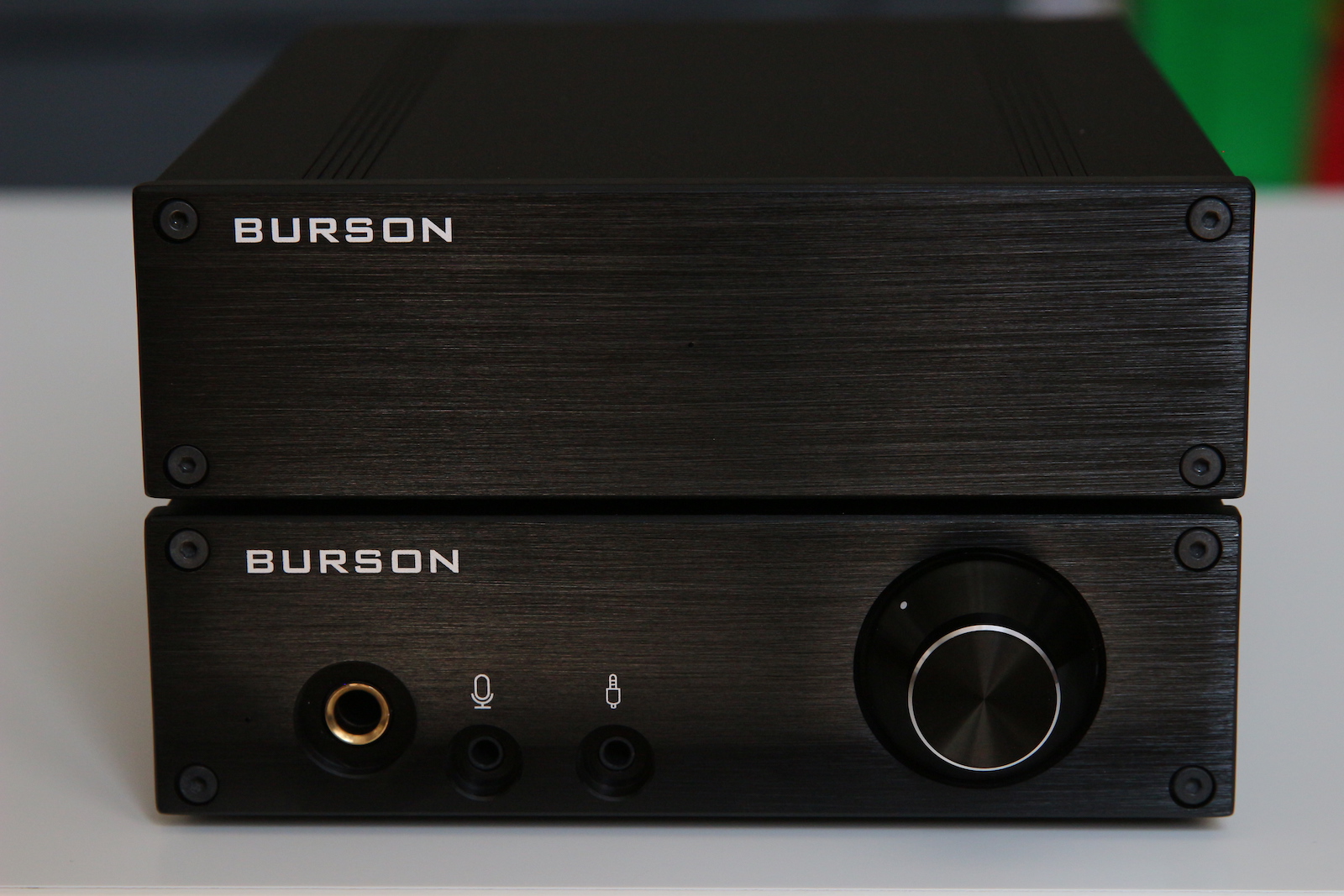 It is pretty difficult comparing the two since Play doesn’t have a true line-out, using the Pre-out will cause the double amping effect which will raise even more the Total Harmonic Distortion. I used the Matrix X-Sabre Pro to listen to the Fun, it uses a Sabre chipset as the Play does. Later on I also connected the Fun to the Play to see if my impressions will change.

As I was expecting Burson Fun sounds a bit clearer, has a faster transient response and a better control over the headphone drivers.

Power output is also higher, especially for higher impedance headphones. I really enjoyed my time with Fun powering the Senn HD820. HD820 sounded good on Play but great on Fun.

Fun is also a bit more transparent and offers a bit more air between the notes, it seems that less op-amps in the signal path made a big difference.

I also liked more how IEMs performed on the Fun as it had almost no hum or noise with sensitive earphones, Play has a higher noise floor and a higher impedance headphone output that may plague your listening experience with sensitive IEMs.

Both headphone amps are working in Class A circuitry for the best possible sound quality and both have the same footprint and weight. Gilmore Lite MK2 goes for 500 USD and Burson Fun basic goes for 300 USD.

Let me start by saying that the Fun has clearly more power and a better control over the drivers. It can drive a pair of Audeze LCD-4 with headroom to spare, but that can’t be done with the Gilmore Lite.

Gilmore Lite sounds a bit more linear and flat, like disappearing completely from the acoustic chain, it has no coloration and can work with a wider range of headphones. It also has a lower noise floor with sensitive IEMs at a higher volume, at normal volume levels both have the same very low noise floor.

Fun adds a bit of its own flavor into the mix, it surely has a character of its own. For rock and fast electronica Fun will sound as having more energy and joy. Fun by comparison has a slight V shape frequency response boosting the low end and the treble response, not by much but it is sizable.

Fun also has a shorter decay of notes and a bigger impact to the eardrums, in this sense Gilmore Lite is a bit leaner, but that can be a result of a lower power output.

Stage size is bigger on Fun but it is deeper on Gilmore Lite, different strokes for different folks as they say.

On technicalities alone Gilmore Lite Mk2 wins, but on sheer power and enjoyment level Fun is clearly ahead. 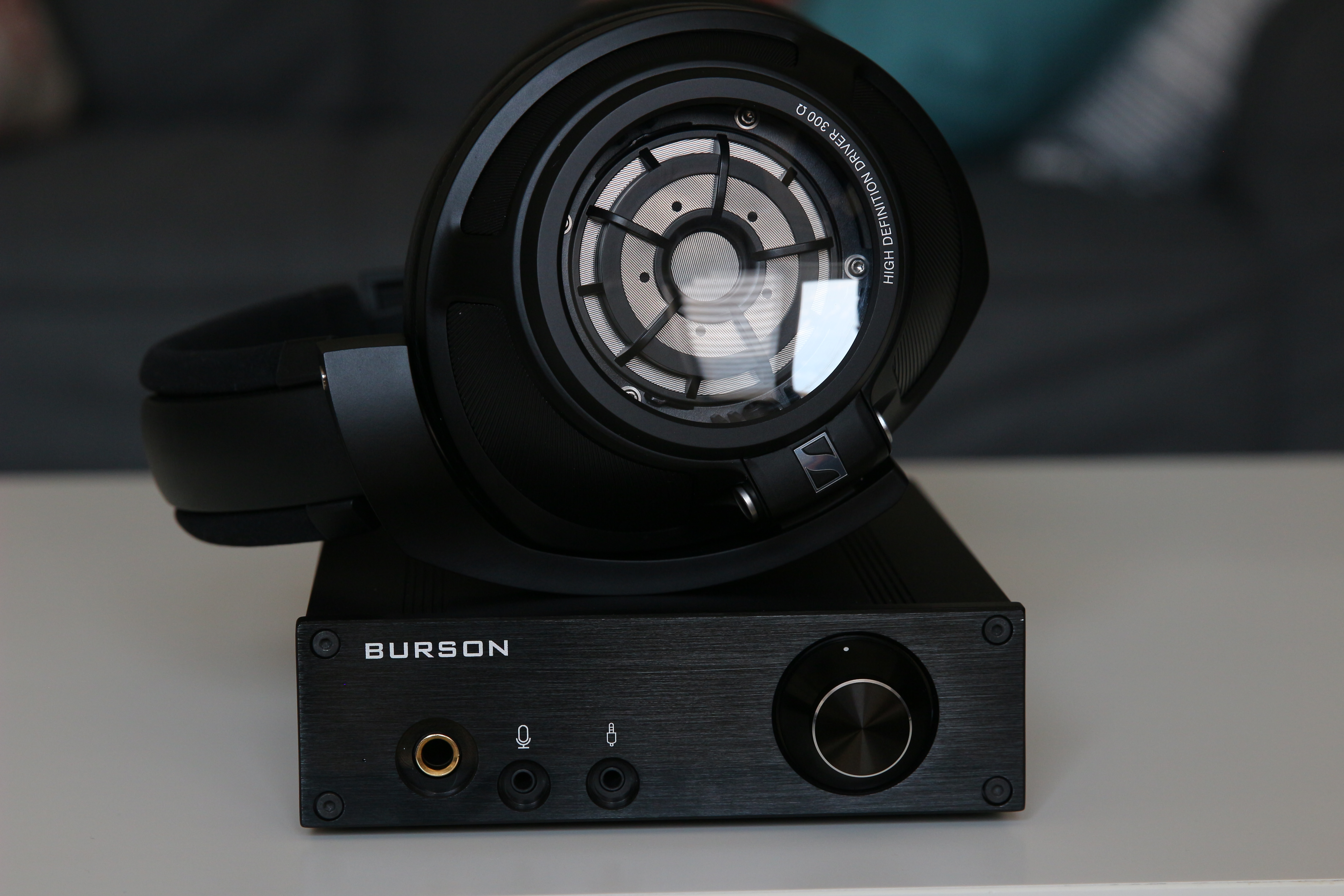 To me Burson Fun is among the best compact sized single ended headphone amps out there regardless of output power or price and that says a lot.

Headbangers and electronica dancers will enjoy it a lot, it has a lot of energy under the hood and power to spare even for the most demanding headphones.

Burson Audio goes with a Bang